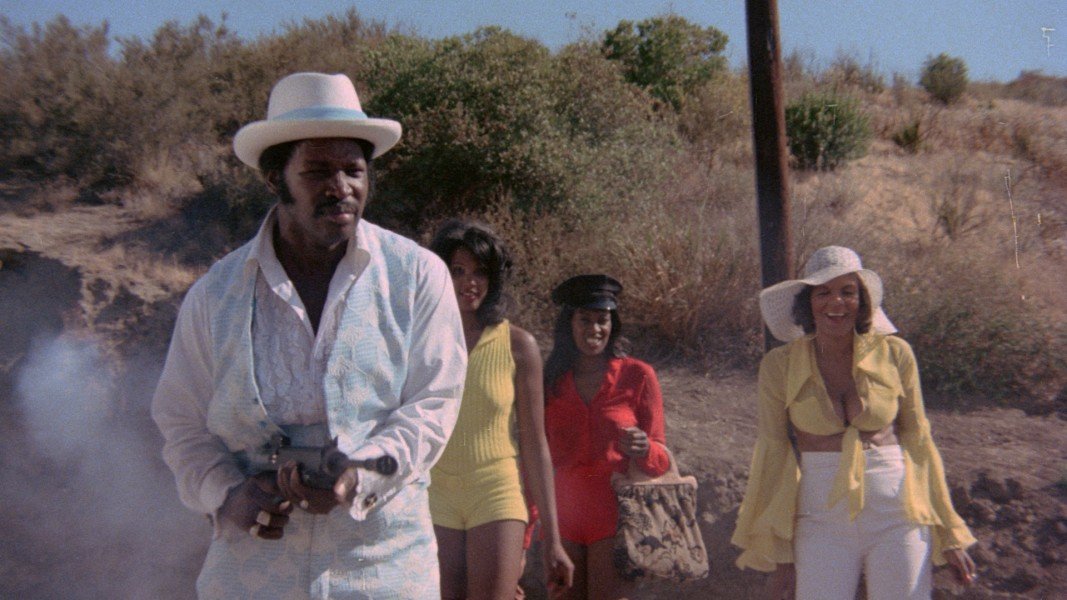 Who’s the baddest mother (shut yo mouth!) to blow into the early seventies? Forget Shaft and just ask X-rated comic and “godfather of rap” Rudy Ray Moore. He’ll give you the gospel of Dolemite (1975).

Street hustler, pimp, and all around ghetto superhero Dolemite began life as a character in Moore’s nightclub act and was a natural character for his self-financed film debut, a revenge tale set on the corrupt streets of LA. Dolemite is sprung from prison by an impossibly understanding and trusting (yet somewhat smug) warden so he can find the drug dealing, gun smuggling crooks who framed him. With the help of his an all-girl army of kung fu killers and the most flamboyant wardrobe this side of Cher, he lays waste to dozens of bad guys while spouting his funky raps.

Thick, slow, and sleepy, Moore is neither a natural actor not a convincing as a martial arts action hero, but when he raps his funky, expletive-filled stories you can see why he’s so popular (“some people call them four letter words, I call them ghetto expressions,” he explains in the documentary portions of the DVD), and his lazy line deliveries are a lyrical cascade of four-letter words and street rap. But between his raps and his patter he walks around with a blank look on his face and just waits for something to react to – he has no real fire in him, which pretty much douses the energy of the film. He does, however, perform two of his most famous stand-up raps, “Shine and the Great Titanic” and “The Signifying Monkey.”

Dolemite is not a particularly competent movie—director D’Urville Martin (also a co-star) is of the quick-and-clumsy school and most of the performances haven’t had much rehearsal—but the weird mix of nightclub rap, kung-fu action, pimp-chic fashion and Moore’s four-letter dialogue turned it into an instant urban hit and has kept it alive as a real cult item.

It also inspired the terrific movie My Name is Dolemite (2021), a loving and funny tribute to the making of Dolemite starring Eddie Murphy as Rudy Ray Moore and Wesley Snipes as D’Urville Martin.

Add to My List on Criterion Channel or stream free on Kanopy or on Hoopla, which are available through most public and college library systems.

Vinegar Syndrome has restored the film for Blu-ray and DVD from a recently discovered negative and it’s well-mastered—it looks better than ever before—but the film itself is kind of flat and there is a little wear on the elements. And it’s presented in both proper widescreen and full frame “boom mic” versions (the latter, which shows the microphones peek through the frame, was the only version previously available) and features the new documentary “I, Dolemite,” two featurettes, and commentary.