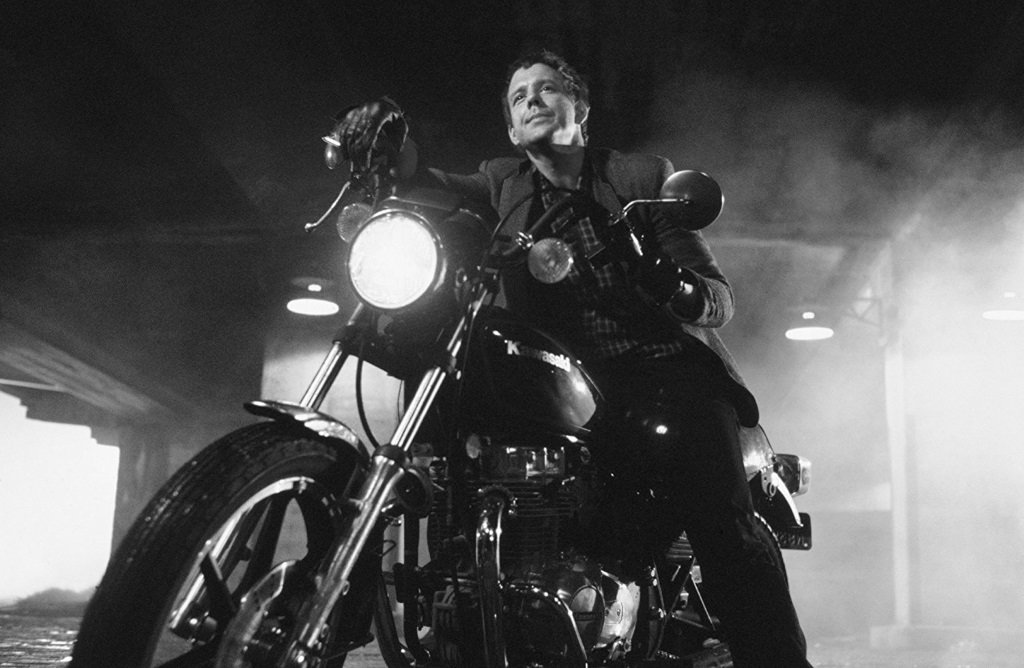 Francis Ford Coppola described Rumble Fish (1983), his screen adaptation of S.E. Hinton’s young adult novel, as “an art film for teenagers.” He shot it right after making The Outsiders (1982), also adapted from a Hinton novel, but where that was a lush, operatic tale, Coppola made Rumble Fish in stylized black and white, like a teen noir seen through the eyes of a kid who has mythologized the idea of street gang chivalry to the point that he can’t see the reality through the idealization.

Matt Dillon is teenage tough guy Rusty James, a good looking, recklessly charming high school kid in the shadow of his brother The Motorcycle Boy (Mickey Rourke), trying to live up to a reputation that his brother wants only to live down. He’s an aspiring juvenile delinquent with a boozer dad (Dennis Hopper) and a nice girlfriend, Patty (Diane Lane), who attends Catholic School across town. Rusty James (always the two names, like a brand) is, of course, from the wrong side of the tracks in the industrial grit of a Tulsa that time left behind and this culture of bars and boozer and packs of kids who imagine themselves as real gangs is steeped in its own mythology, or rather Rusty is steeped in the mythology that no one else seems to revere. He’s fooled himself into thinking that everyone wants that as well and imagines himself the leader of a new gang that brings back the chivalry and loyalty of the street gang fantasy. When The Motorcycle Boy returns from a months-long exile, those dreams are kicked back into high gear. He’s not dumb but then again he’s not that smart—he’s certainly not self-aware and he’s at sea when his father and brother bat around literary allusions and talk of classic myth and legend—and he’s trapped in his delusions.

Rumble Fish covers a couple of days in the life, or maybe a couple of weeks. Time isn’t that easy to track but it dominates their lives, from the clocks marking time in practically every scene to the heartbeat of ticking clocks that creep into the soundtrack to the Rusty James and Motorcycle Boy in front of a giant clock face with no hands—from time running out to out of time. Time drags in school as Rusty James dreams of his good girl gone bad in lingerie fantasies and then it rushes forward as time-lapse shadows slide across buildings and clouds blow across the sky as days flow into nights. The soundtrack is spare and exaggerated, the aural component of the expressionist noir canvas, and the magnificent percussive soundtrack by Stewart Copeland picks up the ticking clock motif with its clacking rhythms.

The story is the journey of Rusty James coming of age, replacing his romantic street gang fantasy with the complications of the real world, put next to the disillusionment of Motorcycle Boy. The slums and streets have a larger than life grandeur in the B&W imagery and dramatic lighting and framing, the mythic conflation of their city by Rusty James, but also seen through the eyes of the color-blind Motorcycle Boy: “Black and white with the sound turned low.” Except for the Siamese fighting fish that give the film its title. They are a glow of vivid, rich color in a monochrome world, and all that gives Motorcycle Boy a sense of hope. That tension runs through the film. Rourke and Hopper both underplay while the camera and dialogue mythologizes them, and Dillon swaggers like he imagines a tough gangleader should, a parody of a charismatic tough guy who lacks the savvy or the smarts to be the real thing. That is the real education of the film: a realist story in a romanticized culture where reputation helps distract from the hopelessness of their lives.

Rated R, in black and white with grace notes of color.

Previously released on DVD from Universal over a decade ago, it has been remastered by Criterion for Blu-ray and DVD from a new 4K digital restoration, supervised by director of photography Stephen H. Burum and approved by director Francis Ford Coppola, and the Blu-ray features 2.0 surround DTS-HD Master Audio soundtrack and an alternate remastered 5.1 surround soundtrack presented in DTS-HD Master Audio. Needless to say, it looks and sounds amazing: the images stark and shadowy and rich, the soundtrack spare and evocative and crisp.

New to the Criterion special edition are interviews with Francis Ford Coppola, author and co-screenwriter S. E. Hinton, actors Matt Dillon and Diane Lane, and associate producer Roman Coppola, and a conversation between DP Stephen H. Burum and production designer Dean Tavoularis, both newly recorded for this release, and archival with actors Matt Dillon, Diane Lane, and Vincent Spano and producer Doug Claybourne, shot on the set of the film in 1983 for “City Lights,” and a 1984 interview with actor Mickey Rourke from the French television program “Cinéma cinémas.” Also new are the feature-length 2013 documentary “Locations: Looking for Rusty James” by Alberto Fuguet, about the impact of Rumble Fish (90 mins) and “Camus for Kids” (2016), a 20-minute interview featurette with film historian Rodney F. Hill tackling the existentialist themes of the film, beginning with a primer on the roots and philosophy of existentialism.

Carried over from the 2005 DVD release is commentary by director Francis Ford Coppola and (presented in standard definition) the featurettes “On Location in Tulsa – The Making of Rumble Fish” (12 mins), which includes videotape footage from the set in 1983, and “Music of Rumble Fish” (12 mins) with Stewart Copeland describing how he came to score the film and create the defining rhythm track loops. Also from 2005 are deleted scenes and the music video to the film’s theme song, “Don’t Box Me In.” The accompanying fold-out insert features an essay by Glenn Kenny.