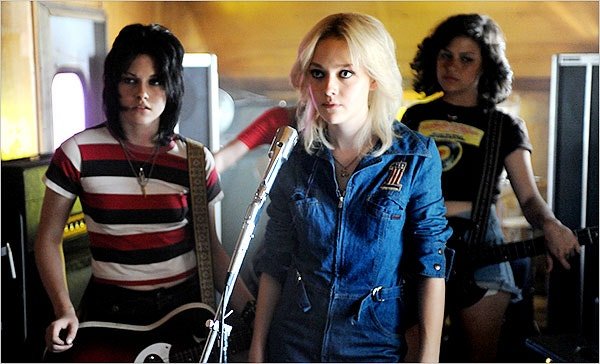 The Runaways (2010) – The Runaways may have been more phenomenon than phenomenal but the hard-rocking quintet of teenage girls made their mark on the music world with a blast of grrrl power and teen rebellion. They were tossed into the culture in 1976 as a gimmick—the original all-girl rock band (and I do mean “girl” – they were all under eighteen when they released their first single)—and they delivered a mix of punk attitude and sexual tease. More importantly, they were an inspiration to aspiring young female rockers all over. The promotion was largely exploitation but the music—their music—was their voice of frustration and empowerment in a male-dominated world.

Their story is quite a tale and this film, while slipping into familiar rock movie rise-and-fall conventions, does a pretty job of getting to the heart of the matter. Kristen Stewart stars as aspiring rocker Joan Jett, Dakota Fanning is Cherie Currie, the band’s singer and jailbait sex symbol, and Michael Shannon is the sleazy impresario Kim Fowley, who manages the novelty of the group to sudden fame and sends them touring without supervision, where they are completely unprepared for the exploitation and mania and slide into drugs and sex (they’ve already got the rock and roll).

Written and directed by Floria Sigismondi, based on the memoir by Cherie Currie, and co-produced by Joan Jett, it’s pretty much the story of their experience and relationship, which leaves the rest of the band (including future metal queen Lita Ford) as supporting characters in their story at best and almost invisible at worst. And frankly, the film lets Fowley off the hook for what is negligence at best and leaves the more troubling accusations of his behavior completely unaddressed.

But their story is fascinating, a study in contrasts (the punk-influenced Joan and the glam-obsessed Cherie, more concerned with image than music) who become friends (and more) on the rollercoaster of fame. The film is admirably matter-of-fact about the intimacy of their relationship, neither exploiting nor hiding the sexual dimensions of it. And how can you not give in to a film about adolescent girl rebellion that opens with a drop of menstrual blood?

, iTunes, GooglePlay, Fandango, Vudu and/or other services. Availability may vary by service.
The Runaways [Blu-ray]

The DVD and Blu-ray release features Joan Jett, who was an executive producer and advisor on the film, with actresses Kristen Stewart and Dakota Fanning on the commentary track. They begin awkward and inarticulate, but as the characters find their voices so does this trio, with Jett supportive of the two actresses and slowly opening up with her own stories while Stewart and Fanning discuss their experiences creating the characters (and the images they constructed through make-up and fashion) and performing on stage. And they go oddly quiet and uncomfortable in the intimate scenes between Joan and Cherie, with Jett simple repeating: “I’ve got nothing to say here.” Jett is absent, however, from the 15-minute “Plugged In: Making the Film,” a conventional featurette with Cherie Curie, the stars and writer/director Floria Sigismondi that is content to remain on the surface of the film.