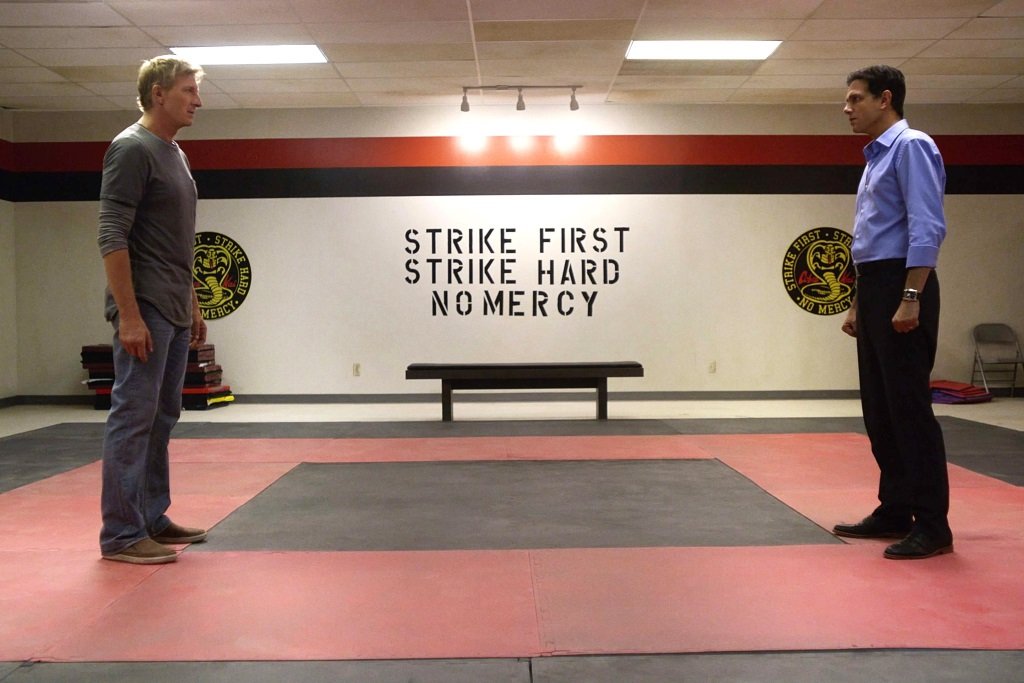 Cobra Kai: The Karate Kid Saga Continues is a sequel that promotes Johnny (William Zabka), the bullying villain of the original film, on a redemptive journey more than 30 years later as he revives the dojo and its “strike first” philosophy. Ralph Macchio is also back as Daniel, who trains his own disciple using the tried-and-true methods he learned from Miyagi.

“Cobra Kai… keeps surpassing all reasonable expectations. Every time I thought the idea had exhausted its usefulness, the story took another turn, or another character dynamic came into play, and I just wanted to see more of it,” celebrates Uproxx TV critic Alan Sepwell. “[I]t’s compulsively watchable, emotionally engaging, and almost always one step ahead of where you think it’s going.”

The first two episodes of ten episodes are free to all viewers, the rest require a subscription to YouTube Red, the paid service of original programming.

Safe, a new Netflix Original series created by bestselling thriller novelist Harlan Coben and produced in England, stars Michael C. Hall (sporting a British accent) as a widower father in a gated community who digs into his guarded community’s secrets when his teenage daughter goes missing.

“Safe leans into most of its increasingly preposterous moments, including Hall’s accent,” cautions IndieWire TV critic Ben Travers. “It’s not that the show or its star’s elocution are bad, per se; they just don’t overwork themselves trying to convince you of their grand importance. Safe is a soap, and it’s a fun diversion as such.”

The true crime documentary series Evil Genius: The True Story of America’s Most Diabolical Bank Heist investigates the 2003 “Pizza Bomber Heist,” where a pizza delivery man was forced to rob a bank with a bomb locked around his neck that ultimately killed him.

“[T]his four-part documentary series is yet another of the streaming service’s based-on-real-events triumphs; a mystery so bizarre and confounding, one wouldn’t dare write it as fiction for fear of having it labeled unrealistic,” writes Nick Schager for The Daily Beast. “It’s no surprise that Schroeder avoids excessive aesthetic embroidery for her material—the insanity speaks for itself.”

The new Hulu Original series All Night is a high school comedy that plays out over a lock-in party with a group of new graduates with one last chance to make their high school dreams a reality. Los Angeles Times TV critic Robert Lloyd proclaims it “awkward and obvious but not unlikable, the series is a cocktail mixed from stock characters and situations and whatever could be found in the folks’ liquor cabinet the weekend they were away.”

Al Pacino directs and stars in Salomé (2013, R), a film adaptation of his 2006 stage production with Jessica Chastain in her (long delayed) feature debut. It’s a rare feature film on BroadwayHD, the streaming service devoted to Broadway stage productions. More on the film from Gary Goldstein at LA Times.

Fifty Shades Freed (2018, R) concludes the kinky romantic trilogy starring Dakota Johnson and Jamie Dornan. It turns out that marriage has its own dangers, including stalking and kidnapping.

Agnes Varda’s Faces Places (France, 2017, not rated, with subtitles) takes the legendary French filmmaker on an artistic journey through rural France with photographer/muralist JR. It was nominated for an Oscar and won awards at Cannes 2017.

More streaming TV: a beauty queen marries into a drug cartel family in the 70-episode telenovela Miss Dynamite: Complete Series (Mexico, with subtitles) and the science guy is back in the nonfiction series Bill Nye Saves the World: Season 3.

Kid stuff: The Who Was? Show: Season 1, based on the best-selling books, is a live-action sketch comedy series that brings humor to history lessons. Also new: the animated Spirit Riding Free: Season 5.

Streaming TV: The Adventures of Rocky & Bullwinkle revives the 1960s series in a new animated incarnation with Moose and Squirrel battling Boris and Natasha. Also new:

Joel Edgerton and Tom Hardy play brothers who come up against one another in a mixed martial arts tournament in Warrior (2011, PG-13). Nick Nolte co-stars (Prime Video and Hulu).

Streaming TV: Niecy Nash and Carrie Preston star in Claws: Season 1, the TNT drama about a Florida nail salon that launders money for a gang of crooks. Also new:

There’s the animated adventure comedy The Lego Ninjago Movie (2017, PG) for kids, documentary A Dangerous Son (2018, not rated) about families coping with the mental illness of a child for non-fiction fans, and 2018 Rock and Roll Hall of Fame Induction Ceremony for music lovers.

Available Saturday evening is Dunkirk (2017, PG-13), Christopher Nolan’s immersive drama of the British army’s evacuation of Dunkirk in 1940, an epic experimental film with minimal dialogue, juggled timelines, and intimate scenes that share the experience of the soldiers and civilians. (Available Sunday on HBO On Demand)

The second season of I’m Dying Up Here, the Showtime Original series about the stand-up comedy scene in 1970s Los Angeles, is now underway with new episodes Sunday nights.

Stand-up: Kevin Smith: Silent But Deadly (2017) is the show that the filmmaker and self-proclaimed geek performed an hour before his heart attack.

TCM Select Pick of the Week is Lawrence of Arabia (1962, PG), David Lean’s epic drama starring Peter O’Toole as English officer T.E. Lawrence in Northern Africa during World War I. It’s part of the “Director of the Week: David Lean” collection of 16 films, which also includes his romantic classic Brief Encounter (1945), Oscar-winning World War II drama The Bridge on the River Kwai (1957), and his final feature A Passage to India (1984, PG).

The eight-part BBC Wales thriller Keeping Faith, starring Eve Myles as a lawyer and mother who turns detective to find her missing husband, makes its U.S. debut on Acorn TV.

The TV documentary Station X (1999) chronicles the how Germany’s Enigma code was broken by British Intelligence in World War II.