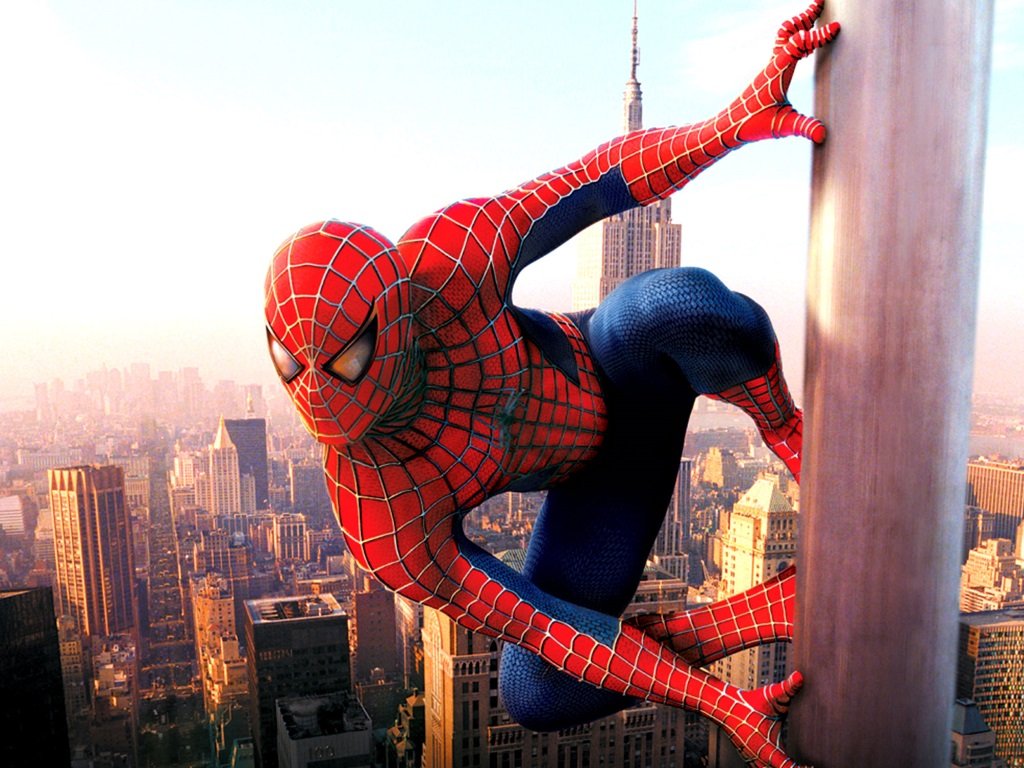 Superhero movies have been a big screen staple ever since Superman first flew through his first animated adventure in 1940. But for all the glory of Richard Donner’s majestic 1978 Superman and the kooky dark weirdness of Tim Burton’s Batman films, it took comic book fan-turned-fan-boy director Sam Raimi to capture the graphic thrills and eye-popping spectacle of a true comic book superhero. The film was Spider-Man (2002) and the superhero movie has never been the same.

Tobey Maguire is the shy science geek Peter Parker, buffed up from every-man to super-man when the bite of a radioactive spider transforms the high school nerd into mutant wall-crawling muscleman. The adrenaline charge of unbelievable abilities comes at a price, however, and he learns the hard way that “with great power comes great responsibility.”

Suited up in a bright, web-laced body stocking, he battles muggers, thieves, and his inevitable supervillain nemesis, the cackling, rocket-powered, Jekyll-and-Hyde gremlin The Green Goblin (Willem Dafoe). But out of costume he’s just as nerdy and nervous as ever as he struggles with his unrequited love of girl next door Mary Jane (Kirsten Dunst under flaming red tresses). It takes a web-slinging rescue to get her attention and you can almost see the sparks when she plants a soft, slow kiss on her knight in red and blue skivvies.

Spider-Man is more than simply a faithful cinematic update of an iconic forty year old comic book character. Raimi translates the teenage melodrama of alienation and tortured secrets that redefined comic book heroes in the 1960s with contemporary flair. He embraces the zip and zoom of modern movie-making magic with a vengeance to send Spidey whipping through the steel canyons of New York like a spider-monkey out of hell.

Raimi captures the ineffable quality that makes this misfit with muscles New York’s own blue collar, working man’s hero. He delivers high-flying whoosh, gymnastic spectacle, and graphic comic book punch, without losing the tragic weight of guilt and responsibility that gives him his calling and his credo.

There have been slicker superhero films, but no other has as much heart, unabashed charm, and sheer kinetic thrill of whipping through the world in a state of high-flying gymnastic bliss.

, iTunes, GooglePlay and/or other services. Availability may vary by service.
Spider-Man [Blu-ray]

The Blu-ray and DVD special editions swing with supplements. The feature is accompanied by two separate commentary tracks. Director Sam Raimi and producer Grant Curtis were recorded together, co-star Kirsten Dunst and producer Laura Ziskin recorded together, and the two separate sessions edited together into a fairly free-flowing track which is fun but lacks the illuminating stories and background detail that would make it indispensable. A separate visual effects track features special effects designer John Dykstra and his crew, plus there is the optional “pop-up” subtitle track “Weaving the Web,” with production notes, historical facts, and factoid tidbits and “Branching Web-i-sodes,” which are short behind-the-scenes featurettes on specific aspects on the production accessed through the film whenever the “Spider-Sense” icon pops up, filmographies, character files, music videos, DVD-ROM supplements (including a comic-to-feature comparison and a “Record Your Own Commentary” function”), TV spots and trailers.

The second disc is the Spidey Cave of Wonders. Okay, there is no such thing, but if there were it would likely have all these goodies, which are divided into two sections. “Web of the Spider” is all about the comic origins of the character and features the original 25 minute documentary “Spider-Man: The Mythology of the 21st Century” (rich in interviews with key Spidey artists through the decades, and of course Spider-Man creator Stan Lee), plus Spider-Man comic book archives and galleries of conceptual art and production design, Spidey rogues, Peter Parker’s loves, and comic book artist pin-ups, a desktop Activision Game, and DVD-ROM supplements (including a PC Activision Game and three exclusive Marvel dot.comics). “Goblin’s Liar,” all about the film, includes two documentary featurettes (the made for HBO “Making of Spider-Man” and the E! channel “Spider-Mania”), profiles of director Sam Raimi and composer Danny Elfman, screen tests for Tobey Maguire, J.K. Simmons and the CGI Spider-Man, costume and makeup tests, and a gag/outtake reel.

The Blu-ray edition includes a bonus UltraViolet copy of the film.