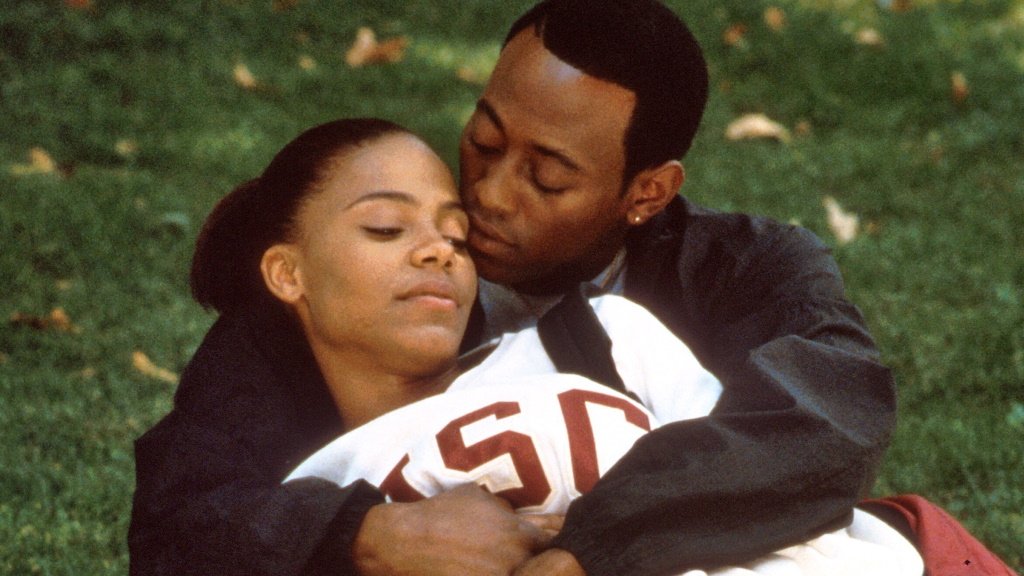 Using sports as a metaphor for life and love is nothing new but filmmaker Gina Prince-Bythewood, a former college athlete, puts her spin on it with Love & Basketball (2000).

Sanaa Lathan is the fiercely driven, hot tempered tomboy Monica, who gives her all for basketball. Omar Epps is Quincy, the son of an NBA player with pro dreams. We know they’re destined for one-on-one from their first meeting as grade school kids in a driveway game of pick-up. Monica so outplays the flabbergasted Quincy that he shoves off the court, giving her a combination battle scar and love memento that she wears with pride.

Their tetchy game of high school rivalry is belied by a hidden friendship. When Quincy flees the shouting of another parental row one night, Monica lets him through her bedroom window and he curls up on her floor. That quiet warmth anchors their relationship even when the script falls into familiar melodrama in the third quarter. Monica’s temper flares up at his naturally flirtatious nature, Quincy sinks into self-pity and petty behavior when he discovers his father’s infidelities, and the high school friends turned college lovers break up. For good? Come on, this is the movies. Sports are unpredictable but romance is certain.

If the romantic complications follow a familiar game plan, the film throws a fascinating spotlight onto the contrast between men’s and women’s basketball. While Quincy plays college ball in huge courts to cheering sold out crowds, we watch Monica’s sweat and tears and sheer physical dedication in front of tiny audiences in small gyms and second-rate auditoriums. Pointedly set in the late 1980s, years before the WNBA, her prospects for pro ball lay exclusively in Europe, while Quincy steps into the pros.

It’s a pleasure to see a character as passionate and fully developed as Monica and Lathan gives a fiery portrayal, taking us through moments of elation and disappointment with convincing pride and vulnerability (she had never played ball before the film, but you’d never tell from her performance). Prince-Bythewood favors her struggle over Quincy’s and opens our eyes to her unique challenges as a woman in a male dominated sport with a sharp, savvy contrast. Alfre Woodard co-stars as Monica’s harping mom (always trying to get her to be more ladylike) and Dennis Haysbert is Quincy’s philandering father. Hoops fan Spike Lee produced.

Prince-Bythewood won a Film Independent Spirit Award for her screenplay among many other awards.

The Blu-ray and DVD releases from New Line feature commentary by writer/director Gina Prince-Bythewood with actor Sanaa Lathan, the original documentary “Breaking the Glass Ceiling: The Rise and Acceptance of Women Competitors,” audition tapes, deleted scenes and outtakes, storyboards, a music video, and the original trailer.