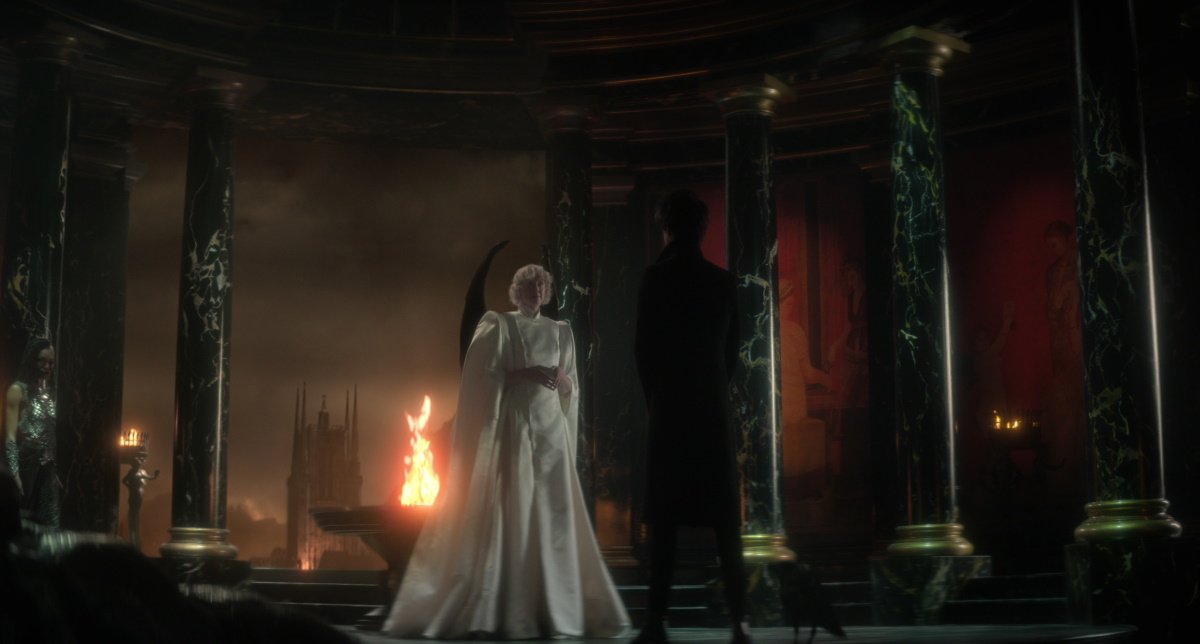 “The Sandman: Season 1” (TV-MA), the long anticipated screen adaptation of the celebrated comic book fantasy created by Neil Gaiman, stars Tom Sturridge as the moody Morpheus, monarch of the Dream realm, who rebuilds his kingdom after years of imprisonment on Earth. It’s an epic tale with a rich mythology built around immortal siblings known as The Endless and the screen adaptation, developed by David S. Goyer (who cowrote Christopher Nolan’s “The Dark Knight” trilogy), embraces the fantastical imagery and epic scope of the award-winning original. Dave McKean, who painted the covers of every issue of the comic book, served as a visual consultant at Gaiman’s request. (Netflix)

Ron Howard directs the real-life survival drama “Thirteen Lives” (2022, PG-13), a global effort to rescue a soccer team trapped in a flooded cave system in Thailand after an unexpected rainstorm in 2018. Viggo Mortensen, Colin Farrell, and Joel Edgerton star as members of the diving team who led the dangerous mission into the flooded cave. It streams after a brief theatrical release. (Prime Video)

Paul Thomas Anderson channels his youth, growing up in the San Fernando Valley in the 1970s, in the Oscar-nominated “Licorice Pizza” (2021, R). Musician Alana Haim stars as a 25-year-old woman looking for direction and Cooper Hoffman (son of the late Seymour Hoffman) is a 15-year-old actor and entrepreneur who falls for her in this playful, offbeat tale of first love. (Prime Video)

Amber Midthunder plays a Comanche warrior who faces a ruthless hunter in “Prey” (2022, R), a new chapter in the “Predator” series set 300 years in the past, pitting the native warrior and her handmade weapons against an alien hunter with a space age arsenal. From “10 Cloverfield Lane” director Dan Trachtenberg. (Hulu)

Director Kenneth Branagh draws on his youth growing up in Belfast in the late 1960s in “Belfast” (2021, PG-13), starring Caitriona Balfe and Jaime Dornan as parents struggling over a decision to leave the violence for London or remain in their home city. It was nominated for seven Academy Awards and won for Branagh’s screenplay. (HBO Max)

The animated comedy “Luck” (2022, G) follows the unluckiest person in the world (voiced by Eva Noblezada) on a quest to turn her luck around. The first feature from the new Skydance Animation comes from veterans of Pixar and DreamWorks Animation and also features the voices of Simon Pegg (as a lucky black cat), Whoopi Goldberg, and Jane Fonda. (Apple TV+)

Chris Evans voices Buzz Lightyear in the “Lightyear” (2022, PG), a quasi-origin story about the heroic Space Ranger before he became a toy. In this animated adventure, he’s stranded in space and attempting to get his crew home while battling the dreaded Zurg. The prequel/sequel/spin-off comes to streaming direct from theaters. (Disney+)

Juliette Binoche is a trucker who goes on the run to protect a young woman being trafficked in “Paradise Highway” (2022, R), a thriller costarring Frank Grillo and Morgan Freeman. It debuts directly to VOD.

“Rise of the Teenage Mutant Ninja Turtles: The Movie“ (2022, TV-Y7), the feature-length spin-off of the animated series, sends the heroes in the half shell to an apocalyptic future.

Daniel Craig is 007 in “Skyfall“ (2012, PG-13), which digs into James Bond’s backstory and features one of the most purely cinematic action scenes of any Bond movie.

True stories: “Clusterf**k: Woodstock ’99“ (2022, TV-MA) looks at how the concert meant to honor the 1969 celebration of peace, love, and music went horribly wrong.

International TV: a reclusive teenager falls in with a group that uses a drug to dream while awake in “Endless Night: Season 1“ (Belgium, TV-MA, with subtitles).

Highlights from “CMA Fest“ (TV-PG), the three-day country music festival that took place in Nashville in June, streams a day after the network showing.

“Source Code“ (2011, PG-13) stars Jake Gyllenhaal as a soldier who keeps reliving the last eight minutes before a bomb goes off, giving him another chance to stop it.

Oscar Isaac plays an ambitious businessman and Jessica Chastain is his fierce, fearless wife in “A Most Violent Year“ (2015, R), a smart, shadowy tribute to the American crime dramas of the seventies.

“Mississippi Grind“ (2015, R) stars Ryan Reynolds and Ben Mendelsohn as oddball buddies who meet over a hand of poker and gamble their way to a poker tournament.

Streaming TV: “Industry“ (TV-MA), the drama of young players in the corporate world in London, returns for a second season.

Classics: Robert Mitchum and Jane Greer star in the film noir masterpiece “Out of the Past“ (1947) from director Jacques Tourneur.

The second season of “The Outlaws“ (2022, TV-MA), a crime comedy from England with Christopher Walken from creator Stephen Merchant, arrives less than year after it the first season.

Adam Sandler gives one his finest performances as a New York jeweler and gambling addict in “Uncut Gems“ (2019, R), an indie drama and character piece driven by adrenaline and nervous energy.

Streaming TV: Scott Bakula plays a man adrift in time and Dean Stockwell is his only anchor to his present in “Quantum Leap: Complete Series“ (1989-1993, TV-PG), a mix of science fiction drama and guardian angel fantasy with a historical twist.

“Beavis and Butt-Head: Season 1“ (TV-14) revives the cult animated comedy about a pair of doofus high school best friends (both voiced by creator Mike Judge) with new episodes. You can also see a selection of episodes from the original animated series that ran from 1997 to 2011.

Two horror movies make their respecting streaming debuts: a teenage boy takes on an ancient with posing as the woman next door in “The Wretched“ (2020, not rated) (AMC+ and IFC) and Robert Patrick, Nick Stahl, and Kelli Garner star in the offbeat “What Josiah Saw“ (2022, not rated), a mix of horror and crime thriller AMC+ and Shudder).

Ricky Gervais created the comedy “Extras: Complete Series“ (2005-2007, TV-MA) with Stephen Merchant, his creative partner on the original “The Office.”

Two allegorical war dramas from Ukraine, made before the Russian attack, make their respective streaming debuts: “Donbass“ (Ukraine, 2018, not rated, with subtitles) is a scathing satire set in a war-torn region on the border with Russia and “The Earth Is Blue as an Orange“ (Ukraine, 2020, not rated, with subtitles) follows a family who deals with life during wartime by creating a film about their experiences.

“Starring Myrna Loy” presents 14 films with the elegant actress, from Rouben Mamoulian’s sexy “Love Me Tonight“ (1932) to the John Steinbeck adaptation “The Red Pony“ (1949) with Robert Mitchum. Her star rose even higher when she was paired with William Powell and the collection features some of their best, including the sparkling mystery “The Thin Man“ (1934) and the romantic comedies “Libeled Lady“ (1936) and “Love Crazy“ (1941).

“Under the Magnifying Glass: Three Documentaries by Jessica Oreck” includes “Beetle Queen Conquers Tokyo“ (2009, not rated), her portrait of Japan’s fascination with insects.

“Dona Flor and Her Two Husbands“ (Brazil, 1976, not rated, with subtitles), a sexy romantic comedy with a twist of magic realism, made Sonia Braga a national superstar and international sex symbol.

Takashi Miike’s “Ichi the Killer“ (Japan, 2001, not rated, with subtitles) is one of the most extreme gangster movies to come out of Japan.