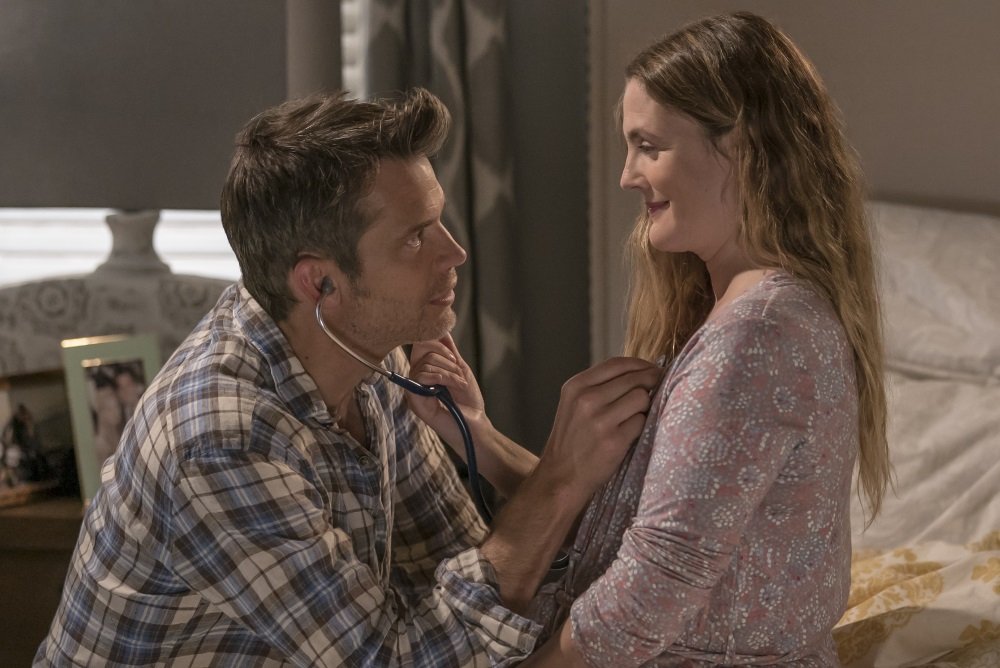 Suburban sitcom meets zombie comedy in the new Netflix original series Santa Clarita Diet, created by Victor Fresco (Better Off Ted). Drew Barrymore stars as a suburban wife and mother who wakes from a fatal fit with a sudden craving for human flesh and Timothy Olyphant as her resigned husband who is roused from apathy by his wife’s sudden rejuvenation. All he has to do is help her secure a steady diet of neighbors and cover up the corpses.

“Think of it as ‘Ozzie and Harriet and Zombies,'” writes Mike Hale for The New York Times. “Ms. Barrymore and Mr. Olyphant work well together — despite the archness of the humor, their marriage seems more real than most television unions. She reprises the intelligent ditz she has played frequently in films, and he plays against his Deadwood and Justified tough-guy type, reminding us that he first got noticed as a malleable young stud in an episode of Sex and the City.”

It’s gory and gooey and played for dark humor.

Queen of Katwe dramatizes the true story of an unschooled girl (Madina Nalwanga) from an impoverished village in Uganda whose nurtures a talent for chess to become a world class chess champion. David Oyelowo and Lupita Nyong’o star in the uplifting and colorful Disney drama (PG). Reviewed on Stream On Demand here.

Tom Cruise is back in the action thriller Jack Reacher: Never Go Back to save a friend (Cobie Smulders) framed for treason (PG-13).

Finding Dory (2016) reunites the aquatic pals of “Finding Nemo” for an animated odyssey across the sea to reunite the memory-challenged Dory (voice of Ellen DeGeneres) with her long lost parents. Sweet, funny, gorgeous, and family friendly (PG). Reviewed on Stream On Demand here.

Helen Mirren plays a Holocaust survivor who battles the Austrian government to retrieve a family treasure looted by the Nazis in Woman in Gold (2015), a drama based on a true story (PG-13).

The Pioneers of African-American Cinema collection presents over 20 feature films and short films produced for African-American audiences in the first half of the 20th Century, newly preserved for home video.

More for kids and families: the new batch of family movies include Tim Burton’s animated holiday mash-up musical The Nightmare Before Christmas (1993, PG) and playfully macabre Corpse Bride (2005, PG), farmyard storybook fantasy Babe (1995, G) and sequel Babe: Pig in the City (1998, PG), and action fantasy The Chronicles of Narnia: The Lion, the Witch & the Wardrobe (2005, PG).

Long Way North (2016) is a gorgeous animated adventure about a young woman from 19th century Saint Petersburg who undertakes an expedition to the North Pole (PG). Reviewed on Stream On Demand.

Swiss Army Man (2016) is a buddy movie with Paul Dano as a lonely shipwreck survivor and Daniel Radcliffe as a flatulent corpse that becomes his best friend (R).

New episodes of the Civil War drama Mercy Street: Season 2 are available a week after they show on PBS.

More movies new to Amazon Prime this month: Sean Penn’s Oscar-nominated Into the Wild (2007, R), Frankie & Johnny (1991) with Al Pacino and Michelle Pfeiffer (R), French drama My King (2015) with Emmanuelle Bercot and Vincent Cassel (not rated, with subtitles), the documentary Nuts! (2016) about the 1920s answer to Viagra, and another batch of James Bond films including Goldfinger (1965, PG).

The high school basketball drama Hoosiers (1986) with Gene Hackman is still considered one of the greatest sports films ever made (PG) (Amazon Prime and Hulu).

The documentary The Dog (2013) tells the story of the real-life inspiration for Dog Day Afternoon, a story even stranger than the Oscar-winning movie (not rated).

The Nice Guys (2016) is a throwback to action comedies of the seventies with tough guy Russell Crowe and soused private detective Ryan Gosling teaming up to find a kidnapped girl (R). Reviewed on Stream On Demand here.

Older films returning to HBO include a collection of Spike Lee films, including Do The Right Thing (1989, R) and Clockers (1995, R) and the crime dramas Mystic River (2003) with Sean Penn and Tim Robbins (R) and Road to Perdition (2002) with Tom Hanks and Paul Newman (R).

The new BBC TV version of Agatha Christie’s The Witness for the Prosecution (2016), with Toby Jones and Kim Cattrall in the roles played by Charles Laughton and Marlene Dietrich in the 1957 film, makes its stateside debut on the streaming service.