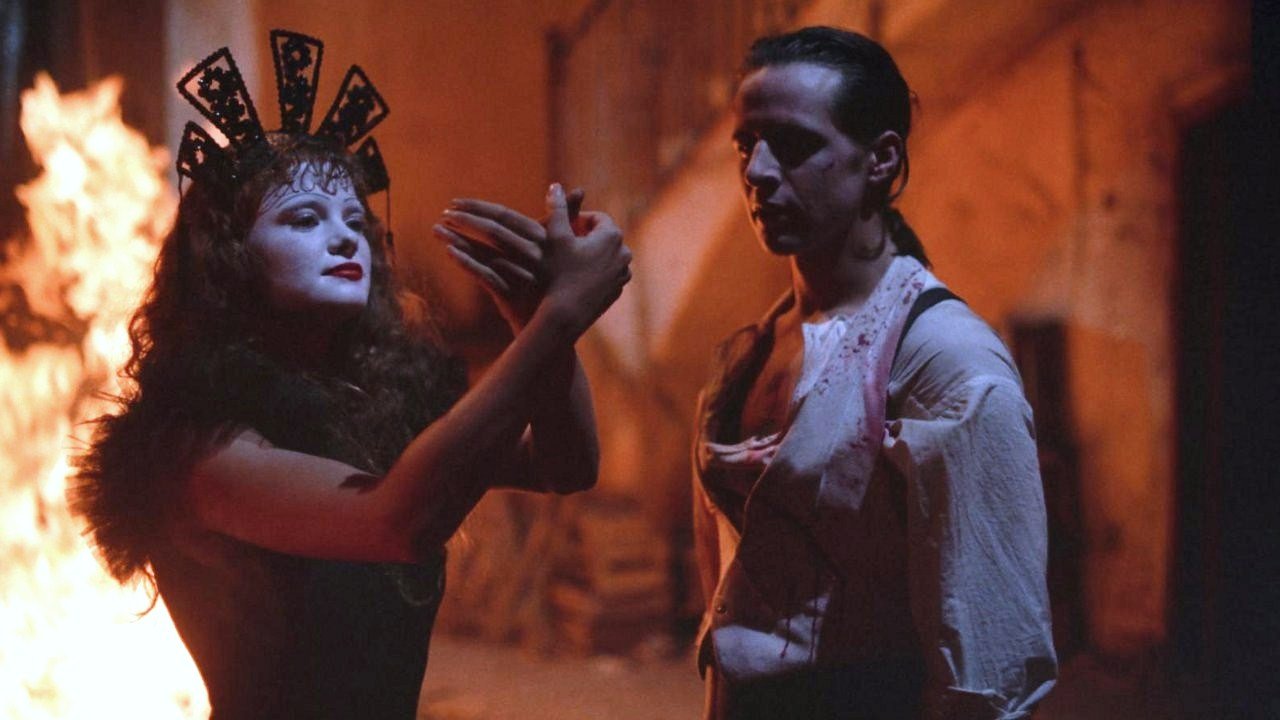 Santa Sangre (Mexico, 1989) – A student of Marcel Marceau in Paris, a founder of the surrealist theater Panic Movement in Mexico City, a Zen Buddhist, playwright and comic strip author, the Chilean-born Alejandro Jodorowsky made his fame as a cult film director with his sprawling, symbolic, surreal films El Topo and The Holy Mountain, brutal and strange allegorical odysseys written and directed by and starring Jodorowsky that became staples on the midnight movie circuit and artifacts of the head film culture. They are also crude and grotesque productions that revel in the metaphysical mix of the sacred and the profane.

Santa Sangre was made more than fifteen years after The Holy Mountain (and after the collapse of his attempt to bring Dune to the screen”) and his skills as a filmmaker and storyteller have improved with time. Whether or not this is the most accessible of Jodorowsky’s films (he also dabbled in more mainstream filmmaking), it is certainly the most accessible “Jodorowksy film,” a vision filled with circus imagery, surreal scenes, grotesque violence and psycho-sexual trauma.

The director casts two of his sons as Fenix, his mad protagonist—Axel Jodorowsky as the grown man (introduced as an inmate in an asylum, regressed to savage behavior and pre-verbal existence) and Adan Jodorowsky as the young boy (a junior circus magician in tux and fake mustache watching the grotesque conduct of adults around him)—and then sends us into the psychodrama that sent him to the asylum. In flashback we watch his alcoholic brute of father (Guy Stockwell in slobbering degenerate mode) take time out of his knife-throwing act to seduce the voluptuous tattooed lady and his tempestuous trapeze artist mother (Blanca Guerra, all burning eyes and hissing fury) take her vengeance in a particularly personal way. In the present, he is drawn into the urban world for a field trip and wanders off to his waiting mother, who has plans to use his arms as the instruments of her continued revenge. Think of it as Jodorowsky’s Psycho by way of Fellini on shrooms.

An English language film made by a Chilean-born/Paris based-writer/director and an Italian producer (Claudio Argento) in Mexico (where Jodorowsky made his most famous films), Santa Sangre mixes culturally-specific art and mythic and religious archetypes with carnivalesque color and primal drives to offer a vision that defies national identity. This exists in its own world of cloistered social units—a circus troupe, an asylum, a blood cult that prays to a murdered rape victim as their saint—and rituals. An elephant’s funeral marching through the streets that ends with an offering to the earth that becomes a free-for-all of a starving peasant mob scavenging the corpse for meat. A father tattoos his young son’s back with a dagger as a rite of manhood (sans anesthetic, of course). An armless tango dancer performs with a partner who provides the arms like a puppeteer with a life-size model. (Axel Jodorowsky, who offers his arms—complete with painted and manicured nails—followed his father’s footsteps and trained under Marcel Marceau and his mime talents are well used here.) And is that a python in his pants or is he just overcome with desire? (It’s both). The symbolism isn’t subtle. It’s earthy, primal, hallucinatory, not always graceful but certainly bold and provocative.

This is the same cruel, unforgiving world of his older films—one woman sells her mute daughter (who dresses in clown white face-makeup and a tutu) as a pliant sex doll to her clients—and just as brutal, though for all the violence the film is less visually explicit than expressionistically suggestive. There is also more compassion and grace, and perhaps a little hope. Jodorowsky found inspiration from the true story of a serial killer who was cured of his madness and the theme of redemption is at the heart of this odyssey. Less overreaching and more compassionate (and at times wickedly, darkly funny) than his first features, Santa Sangre is Jodorowsky’s most accomplished and evocative film, at least until his recent autobiographical productions.

stream free on Kanopy on Shudder or Add to My List, which is available through most public and college library systems.

, iTunes, GooglePlay and/or other services. Availability may vary by service.
Santa Sangre [Blu-ray]

The DVD and Blu-ray release from Severin offers a well-mastered edition on both formats, with the colors bright and the image sharp, and lavishes the release with very good supplements.

The feature-length documentary “Forget Everything You Have Ever Seen: The World of Santa Sangre” is as comprehensive as you could hope for, featuring original interviews with Jodorowsky, his two sons Axel and Adan, co-stars Blanca Guerra, Thelma Tixou, Faviola Elenka Tapia, and Sabrina Dennison (who is mute in real life and communicates via sign language), composer Simon Boswell (a longtime collaborator of producer Claudio Argento), and designer Alejandro Luna. Jodorowsky is joined by journalist Alan Jones on the commentary track and provides solo commentary in a collection of deleted scenes, and there are new and archival interviews with the director (one of them conducted by composer Boswell) as well as more featurettes. “For One Night Only: Alejandro Jodorowsky” is a 1990 documentary made for British TV and “Goyo Cárdenas Spree Killer” is a documentary on the real-life serial killer that inspired the film. There are also shorts, trailers and a music video.