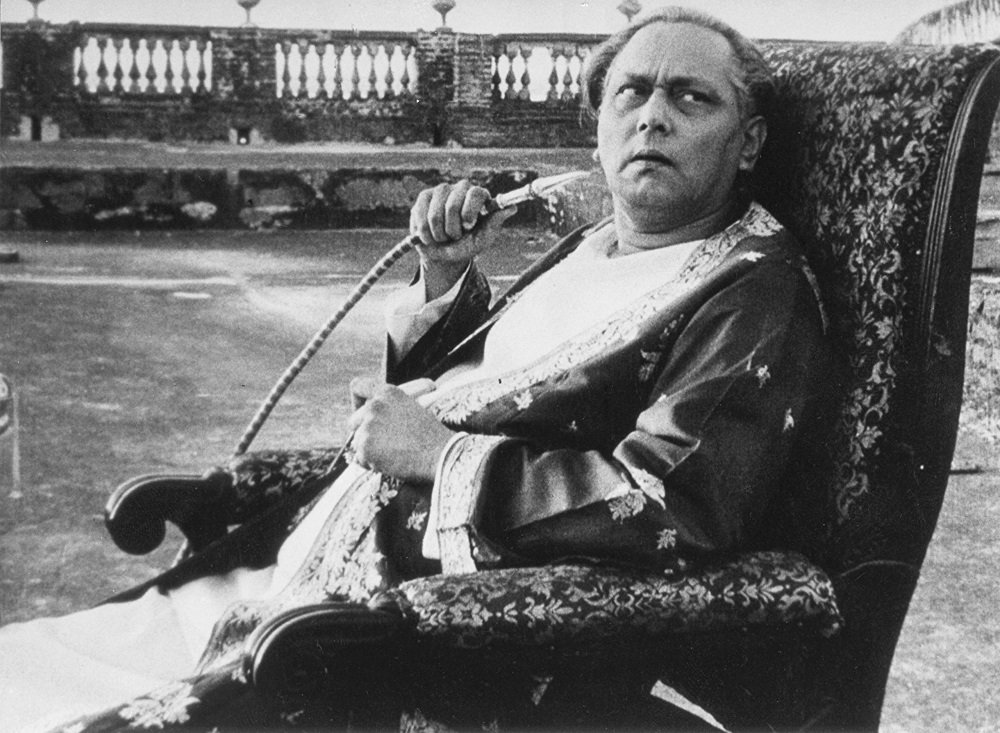 In his first films, the acclaimed Pather Panchali and Aparajito, the great East Indian filmmaker Satyajit Ray eschewed the song and dance interludes that were part of the conventions of domestic Indian cinema. The Music Room (1959) features both song and dance but not in the way of popular cinema. They are integral parts of the film, both as spectacle and as defining illustration of the threadbare aristocrat Biswambhar Roy (Chhabi Biswas), once a powerful feudal lord, or zamindar, now a threadbare remnant of the old world, alone in his crumbling palace as the modern world passes him by.

His great love is music and he considers himself a connoisseur and a patron of the arts, indulging in his hobby to the neglect of his fortune and his lands, which are slowly being swallowed up by the river. It’s a matter of social currency and vanity as much as aesthetics and his obsession becomes his downfall. Vain and impotent, he’s a remnant of a culture of refinement and respect in a world of commerce and modernity, as exemplified in the film by the merchant Ganguly (Gangapada Basu), a garish nouveau riche who gracelessly flaunts his fortune while courting the approval of Roy, still the symbolic elder of the social world.

If Ray is unimpressed with the crude manner of Ganguly, he’s far more critical of Roy, the once mighty lord who has slipped into isolation and irrelevance by his own doing. Yet the film has is a grudging affection for Roy, who though foolish is a loving husband and father, which gives his fall a tinge of tragedy.

And then there are the three performances showcased here as recitals presented by Roy in his lavish music room. Both part of the drama and apart from it, they are presented as a calculated show of Roy’s rarified taste and refinement, and at the same time become a preservation of the classical arts, a far cry from the pop entertainments of Bollywood filmmaking. These performances are as lovely and elegant as the film surrounding them.

Graceful, melancholy, directed with a reserved elegance, The Music Room observes the old-world feudal life of the 1920s fading into irrelevance with both sympathy and disparagement. That balance, as well as Ray’s more confident mastery of cinematic expression, makes this one of his masterpieces

Presented on The Criterion Channel with bonus supplements from the Criterion special edition disc release, including interviews and featurettes.

, iTunes, GooglePlay and/or other services. Availability may vary by service.
The Music Room [Blu-ray]

Criterion DVD and Blu-ray special edition releases are remastered from a 35mm print restored in 1995 and feature a terrific collection of supplements. Shyam Bengal’s 1984 feature-length documentary “Satyajit Ray,” a generous career retrospective highlighted by lengthy interview sequences with Ray, film clips and footage of Ray on the set of The Home and The World, is the highlight of the extras. In addition there is ten-minute 1981 roundtable discussion from French television with director Claude Sautet and film critic Michel Ciment and new video interviews with Ray biographer Andrew Robinson (running 17 minutes) and filmmaker Mira Nair (15 minutes). Also features a booklet with an original essay by critic Philip Kemp and reprints of a 1963 essay by Ray and a 1986 interview with the director about the film’s music. You can read Philip Kemp’s essay on the Criterion website here.