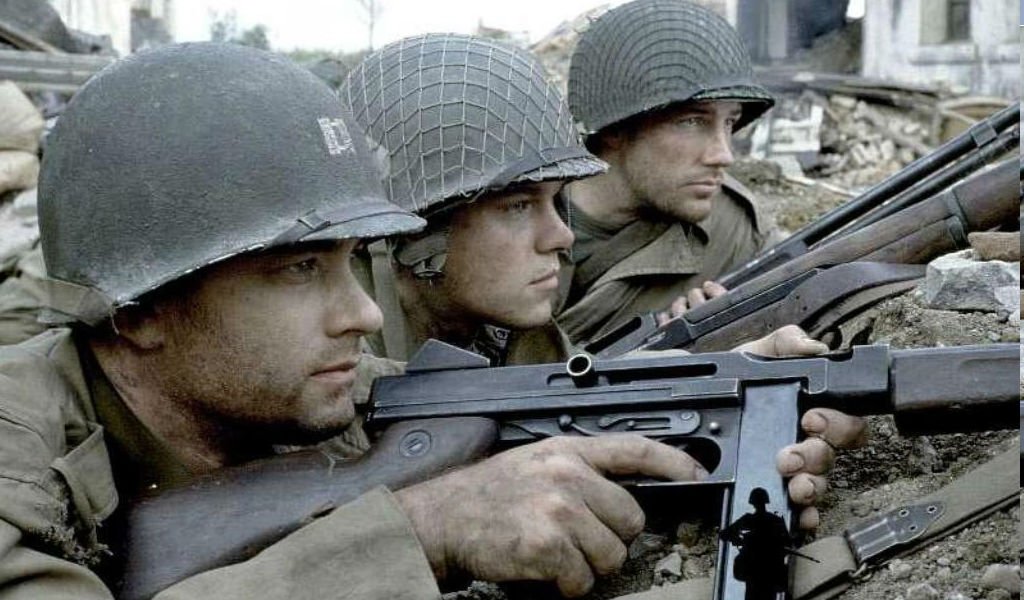 Saving Private Ryan (1998) was the first major World War II film made by Hollywood in decades and the timing was right. The 50th Anniversary of D-Day in 1994 brought the cultural conversation back to the sacrifice of American soldiers. After a generation of films revisiting Vietnam, Steven Spielberg steered Hollywood back to the pride and accomplishment of “the greatest generation.”

In many ways it’s a classic platoon drama with a new mission. Tom Hanks stars as the quietly authoritative as Captain John Miller, whose unit—Sgt. Horvath (Tom Sizemore), Privates Reiben (Edward Burns), Jackson (Barry Pepper), Mellish (Adam Goldberg) and Caparzo (Vin Diesel), and Medic Wade (Giovanni Ribisi)—survives the harrowing D-Day landing on Omaha Beach and is given a new, unconventional mission: head behind enemy lines to find and retrieve Private James Ryan (Matt Damon), a young soldier whose three brothers have been killed in combat. Spielberg builds his odyssey of the experience of American soldier in combat on that simple premise.

The script was inspired by a true story: the Niland family had lost three of their four sons to the war and the War Department, still remembering the five Sullivan brothers who died while serving on the same battleship, sent a platoon to pull the fourth Niland son, a young soldier who had parachuted in with the 101st on D-Day, out of harm’s way. Robert Rodat’s script fictionalizes the particulars but draws upon real history to tell the story of the soldiers who land on Omaha Beach on June 6, 1944. The real-life landing was a slaughter. The pre-invasion barrage had failed to knock out the dug-in German guns and heavily-entrenched soldiers on the hills above the beach and the Germans slaughtered the first wave of American soldiers.

Spielberg transformed the Allied landing into the film’s most visceral and memorable accomplishment: the shell-shock of the brutal, bloody, in-your-face chaos of American soldiers hitting the beach on D-Day. The unrelenting barrage of exploding shells and pelting gunfire on a beach littered with the bodies and limbs of American soldiers hits the audience like an assault on the senses. Bullets tear through air, water, flesh; men stagger about, lost and limbless; explosions shatter the dull scream of war; soldiers bleed, fall, and die, just so many bodies in the detritus of battle. Spielberg’s razor-sharp images are charged with panic. His camera is almost too alert as it takes in the shocking information overload. The skip-frame effects, created in post-production, added a stuttery visual quality and added to the sense of adrenaline-charged immediacy. War had never been portrayed as so intimidating, so terrifying, so arbitrarily destructive.

It earned five Academy Awards, including Spielberg’s second Oscar for Best Director and Janusz Kaminski’s second award for Best Cinematography, and was nominated for eleven awards in all, including Best Picture, Best Screenplay and Best Actor (Tom Hanks). And it was the beginning a long collaboration between Spielberg and Hanks. They produced the HBO series Band of Brothers together (a project that grew directly out of this film) and Spielberg directed Hanks in Catch Me If You Can (2002), The Terminal (2004), and Bridge of Spies (2015).

The two-disc DVD and special edition Blu-ray releases from Paramount Home Video feature 90 minutes of featurettes (directed by the ever reliable Laurent Bouzeraeu) that follow the production from inception to release (“Looking In To The Past: The Research, the Screenplay and the Vision,” “The Making of the Platoon,” “Boot Camp for the Cast,” “Re-creating D-Day: Omaha Beach,” “Music And Sound,” and “Parting Words”) and an introduction by Steven Spielberg.