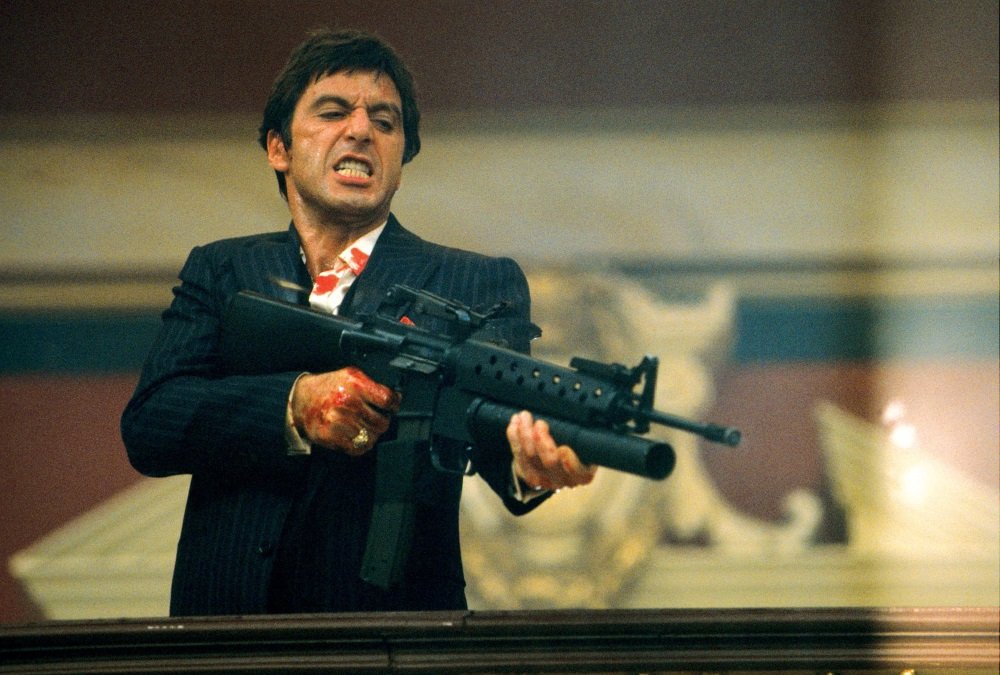 Brian De Palma’s Scarface (1983), ostensibly a remake of the Howard Hawks gangster classic, moves the iconic rise and fall crime opera from the tommy-gun gangster street battles of prohibition era Chicago to the cocaine wars of Florida in the eighties. In the process, De Palma, screenwriter Oliver Stone, and star Al Pacino carved out a film that redefined a generation of gangster cinema.

Pacino’s Tony Montana, a Cuban criminal fresh from Castro’s prisons looking for his piece of the pie in Miami, is a predator from the moment he hits the shore and Pacino is pure drive for success: get the money, get the power, and then you get the girl, is his mantra, and he pulls along his loyal immigrant comrade Manny (Steven Bauer) for the ride to the top.

Oliver Stone’s screenplay keeps the general shape of the original story—Tony’s friendship with Manny, his fierce over protectiveness of his kid sister (Mary Elizabeth Mastrantonio) who isn’t a virginal as he imagines, and his obsession with the boss’s ice-queen mistress (Michelle Pfeiffer), the trophy for the winner—while rethinking it in terms of the Miami cocaine boom of the early eighties. It’s a whole new spin on the immigrant story and the American Dream as an underworld nightmare and a fitting bookend to the Godfather films. The façade of family loyalty, underworld authority, and the mob code is trampled in the feral battle to get to the top of the cocaine mountain as Tony robs and murders his way to riches and power, and then numbs himself into a fantasy of invulnerability with his own product.

De Palma directs it as a blood-drenched thug opera, a mix of the graceful and the garish with Pacino’s guttural thug-in-a-suit spitting out dialogue like broken glass in a harsh Cuban accent. He gets to the point, whether he’s talking or shooting, and has neither the time nor the inclination for niceties. It was a hit in its day and became a pop culture icon and a touchstone in gangsta rap for the way it embraced its excess.

Leaves Netflix at the end of June. Add to My list

Scarface has been a staple in the Universal catalog since the days of VHS, constantly rereleased in new editions and promotions. New to the Blu-ray is the 38-minute retrospective “The Scarface Phenomenon,” a decent featurette that surveys the film’s cultural resonance and influence without offering any new insights, and the 11-minute “The World of Tony Montana,” plus an optional picture-in-picture track that repurposes interview clips from the featurettes and drops them in at appropriate times, as well as clips from the original 1931 film to contrast the way key scenes are played, then and now. Also features the supplements from earlier editions, including a three-part documentary with De Palma, Stone, Pacino and others, and comparisons between the theatrical and TV cuts of the film.

Die-hard fans can even get a super deluxe edition with an exclusive, handcrafted, genuine humidor with the promise “The World is Yours” painted into the finish, at the not quite so reasonable price of $1000 retail. Cigars optional, cocaine not recommended. Rule number two: Don’t get high off your own supply.