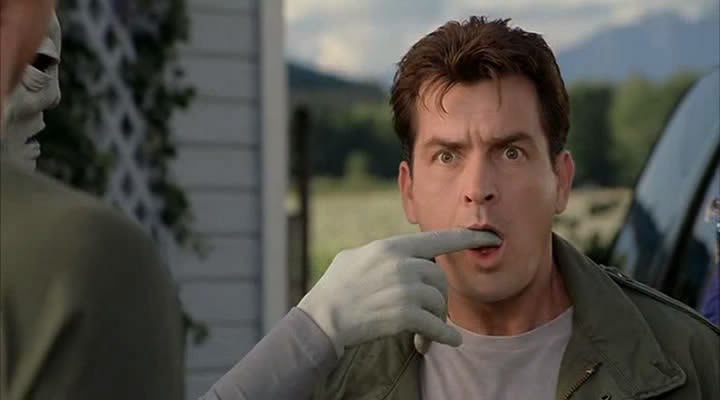 In Scary Movie 3 (2003), David Zucker (co-creator of the Airplane!, the godfather of all movie spoofs) took over the horror movie lampoon franchise previously under the control of the Wayan Brothers and rejuvenated it. Where the Wayans had a mean-spirited edge to their rude and raunchy humor, Zucker plays it in a cartoonish, anything goes spirit.

Anna Faris (the virginal brunette who goes blonde in this chapter) is the ditzy, self-involved TV newswoman who runs through the paces of The Ring while ostensibly looking after her creepy killjoy nephew (who survives the film’s slapstick mayhem with the resilience of a Wile E. Coyote). Charlie Sheen is the tortured single father with a cornfield full of alien graffiti in the Signs parody portion of the film, and brother Simon Rex takes a trip to 8 Mile to deliver Midwest rap on white bread with mayo.

Between Faris’ wrinkled nose and big-eyed, breathless gasps and Sheen’s sleepy intensity and deadpan blankness, Zucker find just the right bewildered tone and he never lets his rapid-fire delivery flag. Not everything hits the target and the pop-culture spoofing is over a decade out of date (other targets include The Matrix and American Idol), but he tosses so many of them off with a wink and a grin that they catch you by surprise. It’s amazing what crack timing will do for a doo doo gag, a ringing sock to the head, and a swift kick to the privates.

and other services and on disc:
Scary Movie 3 [DVD]