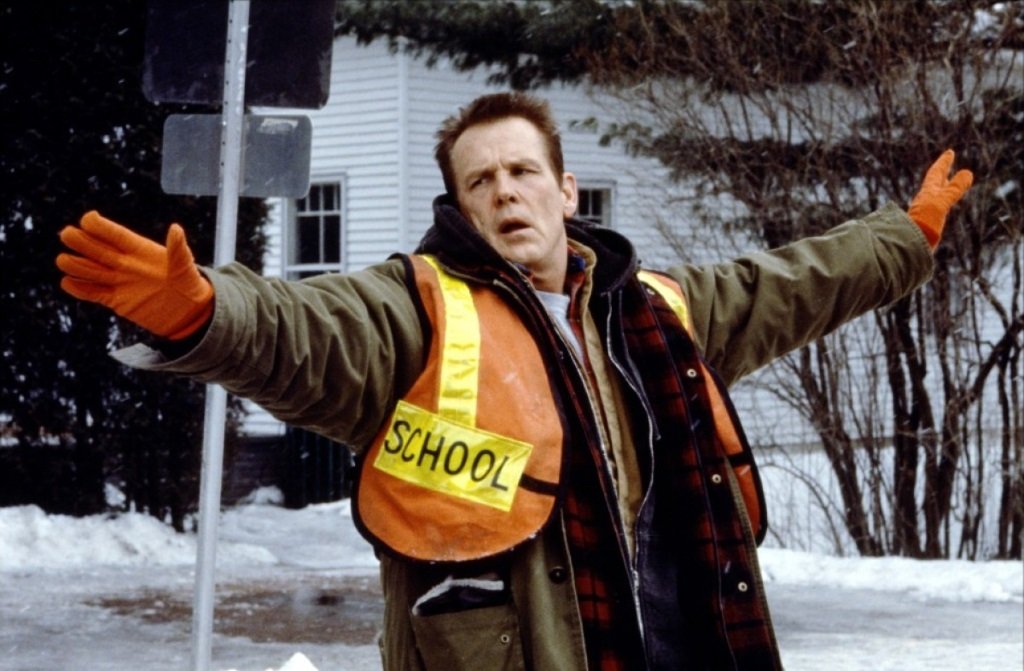 Paul Schrader made his mark on American cinema revealing the scarred psyches of American men trying to reconcile the contradictions of masculine fantasy and social reality, from his screenplays for Taxi Driver and Raging Bull to his own movies, beginning with Blue Collar. Affliction (1998), adapted from the novel by Russell Banks, is his most poignant and powerful work as a filmmaker.

It’s ostensibly the story of Wade Whitehouse (Nick Nolte), an unambitious, jocular small town sheriff and odd job man to a small time entrepreneur. Wade and his brother Rolfe (Willem Dafoe) grew up under a constant barrage of insults, taunts, and outbursts of violence from their father Glen (James Coburn), a bitter alcoholic who still hasn’t stopped tormenting them.

“I was a careful child,” confesses Rolfe. “I became a careful adult. At least I was never afflicted by that man’s violence.” Wade responds with a brittle laugh. “That’s what you think.”

Stuck in the rural New Hampshire home town that Rolfe escaped, Wade shuffles through menial jobs (crossing guard at the school, driving the road grader during the snows) with a numb resignation until he becomes suspicious of a hunting accident that took the life of a wealthy union organizer. Talking with his brother on the phone he spins out a couple of conspiracy theories, which Rolfe encourages in his own, non-committal way, and Wade is soon obsessed with the case the state police have already closed.

In the meantime their aging mother passes away and Wade moves in to care for his mopey, alcoholic father, foisting his unsuspecting girlfriend Margie (Sissy Spacek) onto the old man as an unwanted baby-sitter. Soon the men fall back into familiar patterns and the cycle of vicious taunts and emotional humiliation begins all over again. Coburn delivers his best performance in years as the spiteful old man rising back to abusive life with a grin hardened to a mocking, venomous sneer. “I feel like a whipped dog, Rolfe,” Wade confides in his brother. “Someday I’m going to bite back.”

Nolte uses his stocky physicality, raspy voice, and rough masculinity to explore the tensions of Wade. He peels back the facade of swagger and gruffness to get at the internalized demons he’s bottled up for years in privileged moments of intimacy: the pain behind the smile, the hardened, faraway looks he quickly covers over with a joke and a laugh. When he looks in the mirror, his face almost recoils in recognition; the legacy of his father is working its way out and it terrifies him.

Paul Schrader, a master of cinematic remove, sheers away the directorial distance of his previous work to draw us into the soul of Wade. His camera hangs back at the edges of the scenes while the soundtrack drones and throbs like an ominous rumble, but through the course of the film he develops uncomfortable intimacy and punctuates the drama with startling close-ups all the more effective for their rarity. It’s like watching the disintegration of a psyche under a microscope as cracks in Wade’s facade erupt into tremors of violence.

Meanwhile the cold, objective narration of college professor Rolfe, who holds the story at arm’s length with his writerly diction and disconnected voice, refracts the tale through his own perspective. As he puts into words his clinical take on Wade’s affliction, he unwittingly reveals his own.

As the film comes to its final devastating images Rolfe’s voice chimes in to “interpret” the drama once again, but by now his own affliction has become as apparent as Wade’s. The corrupt love of a violent alcoholic has taken its toll on two lives with wounds that will never heal. For Wade the legacy has erupted in his own uncontrollable violence; as the eldest brother he took the brunt of his father’s fury, and as an adult he never developed the physical or emotional remove of his brother.

But Rolfe’s affliction is equally as harrowing; he’s an adult so careful he’s disconnected himself from his own childhood to the point of editing himself out of his memories of the Whitehouse family crises. “In telling Wade’s story I tell my own,” he remarks in his opening narration, and by the end those words are truer than Rolfe is willing to recognize.

Leaves Amazon and Hulu at the end of April. Add to Amazon Prime Watchlist or to My Stuff on Hulu

, iTunes, GooglePlay and other services. Availability may vary by service.
Affliction [DVD]