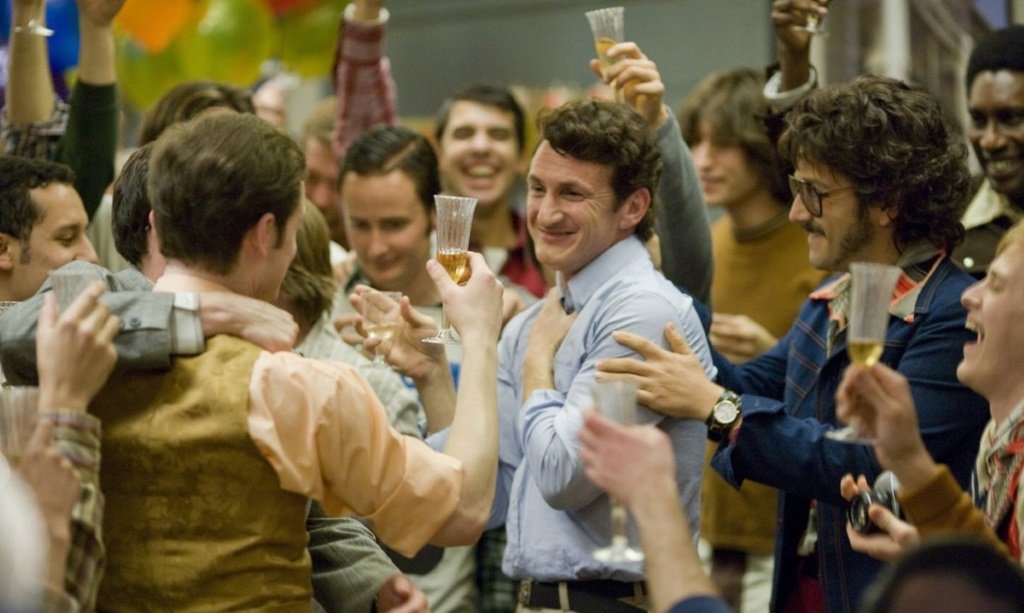 Milk (2008) – The story of San Francisco activist and politician Harvey Milk, the first openly gay man elected to public office in the U.S., was first brought to the screen in the Oscar-winning 1985 documentary The Times of Harvey Milk

. It took more than twenty years for Hollywood to finally tackle the story, with Gus Van Sant directing and Sean Penn in the lead delivering an Oscar-winning performance.

Penn’s performance is inspiring, a transformation that finds the heart and soul of a historical figure and sends blood pumping through a man who has become practically deified over the decades. His Harvey Milk is not a crucified messiah but a human being who rediscovers himself and his potential when he moves to San Francisco and embraces who he is behind his suppressed front of conformity, not just as an out-and-proud gay man but a man who is no longer embarrassed at being himself, bad jokes and all. His greatest revelation: the way this goofy gay nerd won the people of his district (gay and straight both) over with his sincerity, his passion, and his complete lack of self-consciousness. He was “the Mayor of Castro Street” and he inspired a generation to stand up for themselves.

Josh Brolin is Dan White, a tightly-wound fellow councilman and ex-cop who plays to all-American values and Catholic morality. He finds an unexpected ally in Milk on the city council but never masters the art of negotiation the way Milk does. Then came Proposition 6, the hateful initiative to remove gay teachers from public schools. White’s “family values” position collides with a statewide coalition of activists—one of the first major victories in the campaign against discrimination of gay and lesbian citizens—and he unravels. Milk doesn’t present White as a villain so much as a different kind of victim, trapped by his own sense of white male identity, and Milk’s success threatens (and perhaps even challenges) his increasingly fragile sense of self.

Dustin Lance Black also won an Oscar for his screenplay, which focuses less on Milk’s triumphs than on his activism: how he shaped a movement and showed gay men and lesbian women all over the country that they could stand up for their rights as a political force. Milk’s murder (and it was a murder, Twinkie defense aside) was tragic but this film is more concerned with celebrating Milk’s life and the reverberations of his example.

Also on Blu-ray and DVD and on SVOD through Amazon Video, iTunes, GooglePlay, Fandango, Vudu and/or other services. Availability may vary by service.
Milk [DVD[

The Blu-ray and DVD feature three conventional featurettes, each under 15 minutes, none of them featuring director Gus Van Sant (outside of a couple of behind-the-scenes shots). The most interesting are “Remembering Harvey,” featuring the friends and colleagues Harvey Milk (including some of the people portrayed in the film) and “Marching For Equality,” where extras in the recreations reflect back on the real events. Also features “Hollywood Comes to San Francisco” with the cast and the screenwriter discussing the legacy of Harvey Milk. The Blu-ray disc features BD-Live extras.