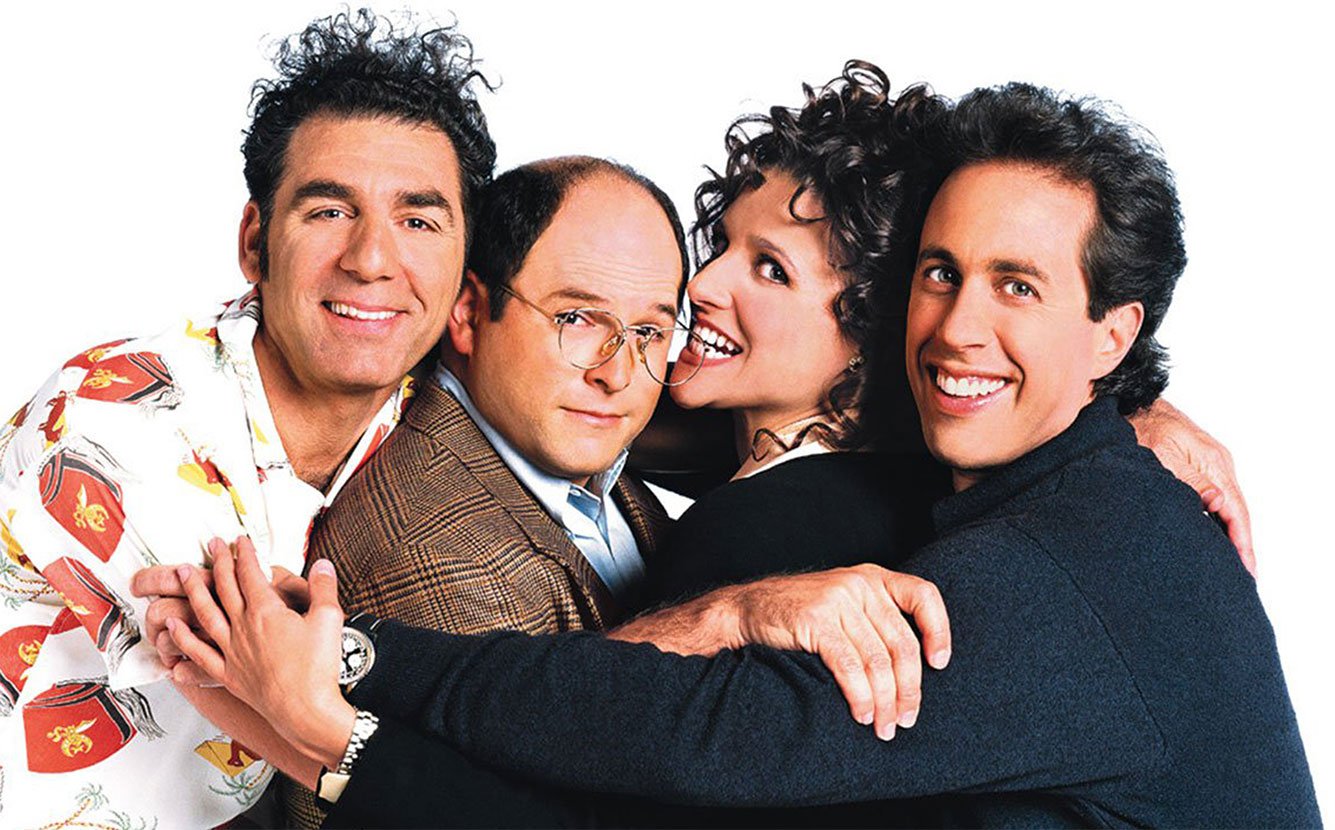 Voted the #1 TV series of all time by TV Guide, winner of ten Emmy Awards, a veritable pop culture phenomenon, yada, yada, yada, Seinfeld (1989-1998) is the legendary sitcom about nothing… not that there’s anything wrong with that.

The show started slow with a brief four-episode tryout. Elaine is nowhere to be seen in the pilot and the show struggled to find its footing in the initial episodes. It found its center in the second season, expanded to 13 episodes, as exemplified by the legendary, series defining “The Chinese Restaurant,” where the entire episode plays out with the quartet waiting in line for a table (that episode had network executives scratching their heads—”Nothing happens!” was their response. Bingo!).

By Season 3 the show graduated to a full 23-episode run, including “The Library” (with Philip Baker Hall as the obsessive and humorless “library detective” Bookman), the brilliant, anecdotal “The Subway,” and the two-part “The Boyfriend” with the hilarious “second spitter” JFK parody, and memorably ends with “The Keys,” where Kramer heads to LA to follow his acting dream and actor Michael Richards’ guest shot on Murphy Brown becomes character Kramer’s TV debut.

Something actually starts to happen in Season 4: Jerry and George pitch a sitcom to network executives, a show about… nothing. Highlights of the season include the legendary “The Contest” (and its now classic line “master of your domain”), “Bubble Boy” (“The Moops”), “The Outing” (Jerry and George try to dispel the rumor that they are gay… “not that there’s anything wrong with that”), “The Implant” (with guest star Teri Hatcher), and the season’s hour-long climax where Jerry finally shoots “The Pilot” and the President of NBC falls in love with Elaine.

What had been a critic’s favorite with an outsized impact on pop culture was finally became a bonafide hit series with Season 5, with such episodes as “The Puffy Shirt” (Jerry gets decked out like a pirate… or perhaps Austin Powers), “The Lip Reader”, “The Stand-In,” and “The Hamptons” (introducing the concept of “shrinkage” into the public lexicon) helped make the series the third most popular show in TV. In Season Six, it hit number one and remained at the top of the Nielson Top Ten (in either the first second spot) through its ninth and final season, concluding with an hour-long finale where the self-involved quartet is put on trial for their blatant disregard for the rest of the world. Among the highlights of the final seasons are “The Switch” (which reveals Kramer’s first name), “The Cadillac” (with guest star Marisa Tomei), and “The Soup Nazi.”

It won a mere ten Emmy Awards in its nine-season run, including three for Michael Richards, one for Julia Louis-Dreyfus, two for writing, and only one for outstanding comedy series. Its legacy, however, far outstrips its Emmy haul. TV Guide named it the greatest TV show of all time in 2002 (it dropped to number two in a 2013 piece) and it remains one of the most popular shows in TV syndication, forever playing reruns in late-night comedy blocks.