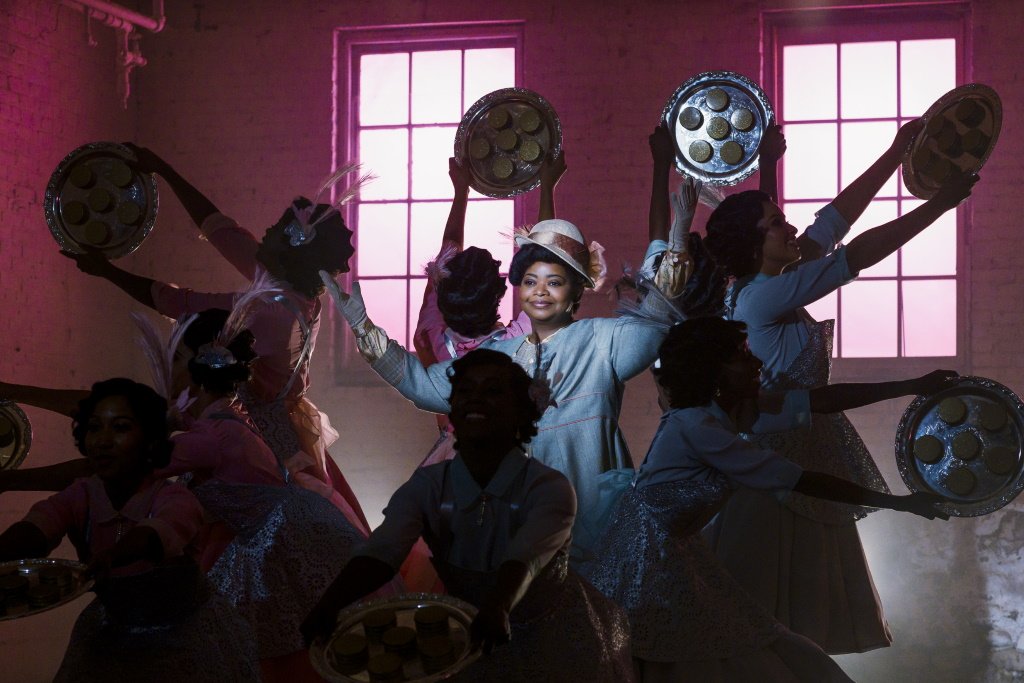 Octavia Spencer plays C.J. Walker, the African-American businesswoman who built a business empire pioneering hair care products for black women at the turn of the 20th century, in “Self Made: Inspired by the Life of Madam C.J. Walker” (2020, not rated), a biographical drama and a look at Black life in 19th century. Carmen Ejogo and Tiffany Hadish costar in three-hour, four-part limited series now streaming on Netflix.

“The Plot Against America” (2020, TV-MA), based on Phillip Roth’s alternate history novel of America under President Charles Lindberg, presents a 1940s America where intolerance and anti-Semitism takes hold. The American aviation hero was also virulently anti-Semitic and objected to America’s involvement in World War II and the series dramatizes a terrifying turn to nationalism, bigotry, and anti-Jewish violence in 1940s New York. David Simon, the creator of “The Wire” and “The Deuce,” adapts and produces and Zoe Kazan, Morgan Spector, Winona Ryder, and John Turturro star. On all HBO platforms, with new episodes Monday nights.

Canadian comedian Mae Martin plays a version of herself embarking on a new relationship in London in “Feel Good: Season 1” (not rated), a comedy that takes on LGBTQ relationships, gender identity, and addiction. Six episodes on Netflix.

To ease our travel into the unknown in the real world, Disney+ makes “Frozen II” (2019, PG) available to subscribers months ahead of schedule. The animated musical fantasy brings Elsa, Anna, and friends back for a new quest with a more dramatic story and greater stakes, and a fine score that doesn’t quite match the musical heights of the original. It was an Oscar nominee for its centerpiece original song. Features the voices of Kristen Bell, Idina Menzel, Jonathan Groff, and Josh Gad, with newcomers Sterling K. Brown and Evan Rachel Wood.

Essie Davis returns as TV’s most glamorous high society detective in “Miss Fisher and the Crypt of Tears” (2020, not rated), the feature film spin-off of the hit Australian mystery series. The globetrotting adventure revolves around a curse and takes her to Jerusalem, London, and Egypt, where she is never less than perfectly decked out in high fashion. It debuts on Acorn TV after a limited theatrical run.

With movie theaters closing across the country, Universal is making three new releases available on Cable On Demand and VOD: the witty Jane Austen adaptation “Emma.” (2020, PG), the modern reworking of “The Invisible Man” (2020, R) with Elisabeth Moss, and the divisive satirical thriller “The Hunt” (2020, R). Expect premium prices for these offerings. I anticipate other studios will follow suit with select movies, but don’t expect to see major big budget releases, which are currently being rescheduled for release later in the year.

“Richard Jewell” (2019, R), Clint Eastwood’s drama about the security guard who was crucified in the media on unfounded charges, got lost in the winter movie season but earned an Oscar nomination for actor Kathy Bates. Paul Walter Hauser stars with Sam Rockwell, Jon Hamm, and Olivia Wilde. Also on DVD and at Redbox. Also new:

The seven-episode limited series “Tiger King” (2020, not rated) is a stranger-than-fiction true crime documentary about a murder in the world of wild cat breeders.

The new fantasy adventure “The Letter for the King: Season 1” (2020, TV-PG), adapted from a beloved Dutch young adult novel, is being called “Game of Thrones” for kids.

“The English Game” dramatizes the transformation of English football from an elite sport of gentlemen to one dominated by working class players. “Downton Abbey” creator Julian Fellowes scripts the six-part limited series.

“Altered Carbon: Resleeved” (2020, not rated) is an animated feature spin-off of the live-action series.

More true stories: “A Life of Speed: The Juan Manuel Fangio Story” (2020, not rated) looks at the five-time Formula One champion of the early 1950s.

Kid stuff: “Shaun the Sheep – Adventures from Mossy Bottom: Season 1” (2020) is a new animated comedy series from Aardman Animation. For the very young, there’s “Buddi: Season 1” and for teens and tweens there’s the feature film adolescent fantasy “Lu Over the Wall” (Japan, 2017, PG) and high school mystery “Greenhouse Academy: Season 4.” There are also new seasons of the animated shows “The Boss Baby: Back in Business,” “Archibald’s Next Big Thing,” and “Dino Girl Gauko.”

And if you really need to indulge in an end-of-the-world film, the epic disaster spectacle “2012” (2009, PG-13) with John Cusack and Amanda Peet is new to Netflix.

Jim Henson combines fairy tale and medieval legend in “The Storyteller” (1989), narrated by John Hurt, and reaches back even further for “The Storyteller: Greek Myths” (1991) with Michael Gambon. Anthony Minghella (who went on to write and direct “The English Patient”) scripts the first series and both shows feature a mix of human actors and sophisticated puppetry and celebrate stories and the art of storytelling with grace and imagination. Both are family friendly.

The Freeform series “Motherland: Fort Salem” (2020, not rated), set in an alternate reality where the descendants of Salem witches are trained to become weapons, rolls out on Hulu with new episodes each Thursday.

Mackenzie Davis and Caitlin FitzGerald play actresses trying to reconnect after falling out in the psychological drama “Always Shine” (2016, unrated).

The third season of the science fiction thriller “Westworld” (TV-MA) moves out of the high tech theme park and into the material world as Dolores (Evan Rachel Wood), the sophisticated robot that developed sentience and a survival instinct, takes on humanity. Jeffrey Wright, Thandie Newton, and Tessa Thompson return to the heady, high concept series, which takes on a sleek new style for its final season.

Also returning is “My Brilliant Friend: Season 2” (Italy, TV-MA, with subtitles), based on the novels by Elena Ferrante.

True stories: the subject of “After Truth: Disinformation and the Cost of Fake News” (2020, TV-MA) is all in the title.

The second season of “Black Monday” (TV-MA), a comedy set in the Wall Street crash of the 1980s, begins with two episodes now streaming and new episodes on Sundays.

The new season of the Irish crime drama “Blood“(2020, not rated) with Adrian Dunbar and two more seasons of the 1980s series “Lovejoy” with Ian McShane as a charming rogue of an antique hunter are now available.

Anthony Mackie and Samuel L. Jackson star as African-American businessmen who hatch a business plan to fight for housing integration in the 1960s in “The Banker” (2020, PG-13), a drama based on a true story. It comes to Apple TV+ a few weeks after debuting in theaters.

Criterion Channel presents seven films “Starring Rita Hayworth,” who was dubbed “The Love Goddess” of 1940s Hollywood, including the Howard Hawks adventure drama “Only Angels Have Wings” (1939) with Cary Grant and Jean Arthur, the musical “Cover Girl” (1944) with Gene Kelly, and her great film noirs “Gilda” (1946) and “The Lady from Shanghai” (1947), directed by and starring Orson Welles. Also new to this month: