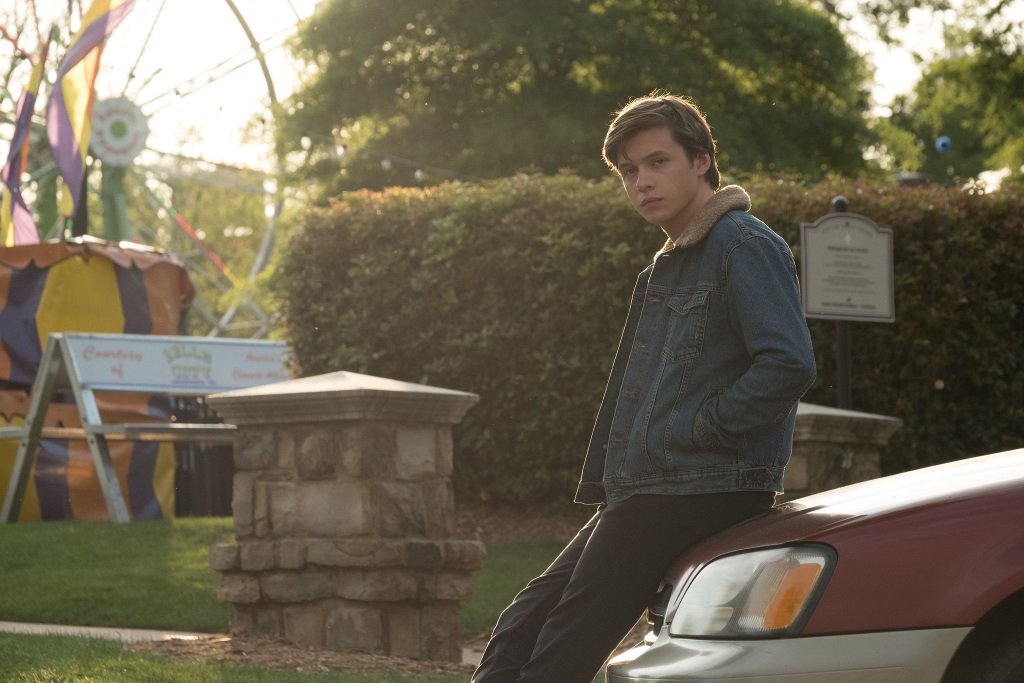 Love, Simon (2018, PG-13) uses the familiar conventions of the coming-of-age teenage romantic comedy for the story of a gay high school boy (Nick Robinson) coming out to his friends and family. Jennifer Garner and Josh Duhamel play his parent and Greg Berlanti (creator of the CW superhero shows) directs. Check the reviews on Rotten Tomatoes, where it’s over 90% fresh. On Cable On Demand and VOD as well as DVD.

Bid farewell to Portlandia the sketch comedy series by Fred Armisen and Carrie Brownstein that defined the Oregon city as a counterculture haven, by streaming the eighth and final season, now on Netflix. Kyle MacKachlan returns as the Mayor in the series finale.

BroadwayHD, the service that allows theater lovers to see recordings of live Broadway shows at home, expanded its scope just a bit with ten programs from the acrobatic circus theater company Cirque du Soleil, including their Avatar-themed production Toruk (2016).

Zoey Deutch and Glen Powell play frustrated interns who set up their bosses (Taye Diggs and Lucy Liu) in Set It Up (2018, not rated), a romantic comedy debuting exclusively on Netflix.

True stories: the Oscar-nominated documentary Cutie and the Boxer (2013, R) profiles eccentric artist Ushio Shinohara and his wife Noriko, who embarks on her own artistic career after a life of assisting his dreams.

And you can celebrate the legacy of Anthony Bourdain, the celebrity chef who used food and cooking as a way to explore other cultures in his TV foodie travel shows, with his CNN series Parts Unknown. Netflix has all eight seasons of the Emmy-winning show.

Jason Momoa stars in Braven (2018, R) as a logger in rural Canada who goes up against drug runners threatening his family.

Billy Bob Thornton is back in the second season of the Prime Original legal drama Goliath from creator David E. Kelley.

The Autobiography of Miss Jane Pittman (1974, not rated), the powerful TV movie starring Cicely Tyson as a woman born into slavery who lives through the civil rights movement of the 1960s, won nine Emmy awards. Also newly available:

Cult movies: Rock ‘n’ Roll High School (1979, PG), produced by Roger Corman and starring the Ramones, is one of the greatest rock and rebellion movies ever made. It arrives on Prime Video along with a handful of other Corman drive-in classics, including:

Precious (2009, R), directed by Lee Daniel from the novel “Push” by Sapphire, stars Gabourey Sidibe as an overweight, illiterate, pregnant teenager in 1987 Harlem who finds hope in an oppressive life. It won Academy Awards for its screenplay and supporting actress Mo’Nique (Prime Video and Hulu).

Available on Saturday is Transformers: The Last Knight (2017, PG-13), the sixth film in the action franchise of giant robot wars. Anthony Hopkins joins Mark Wahlberg, Josh Duhamel, and the CGI army of giant mechanical monsters that fold themselves like origami (Prime Video and Hulu).

Inspired by a true story, American Made (2017, R) stars Tom Cruise as a pilot who makes a small fortune flying weapons and drugs between the U.S. and South America for the CIA in the 1980s.

Dax Shepard and Michael Pena cruise the highways in CHIPS (2017, R), a comedy reboot of the 1970s cop drama.

Arriving Saturday night is The Mountain Between Us (2017, PG-13), starring Kate Winslet and Idris Elba as strangers who must work together to survive a plane crash.

Pork Pie (2017, not rated), a road movie action comedy about three accidental outlaws driving the length of New Zealand, is a remake of the 1980 cult film “Goodbye Pork Pie” directed by the son of the original director. It makes its US debut on Showtime.

TCM Select Pick of the Week is Baby Doll (1956), starring Karl Malden as a lascivious mill owner on the skids who is counting the days before he makes his child bride (Carroll Baker) his wife in fact as well as in title and Eli Wallach is rival businessman who takes revenge by seducing the girl. Directed by Elia Kazan from an original screenplay by Tennessee Williams, the film was condemned by the Legion of Decency and called “just possibly the dirtiest American-made motion picture that has ever been legally exhibited” by Time magazine. Streaming through December 7.

It’s part of a seven-film collection of features “Written by Tennessee Williams,” which includes the FilmStruck debuts of The Roman Spring of Mrs. Stone (1961) Vivien Leigh and Warren Beatty and Sweet Bird of Youth (1962) with Geraldine Page and Paul Newman.

The quintessential Rat Pack movie, the original Ocean’s 11 (1960) drops Frank Sinatra, Dean Martin, Sammy Davis Jr., Peter Lawford, and Joey Bishop in Las Vegas for an epic casino heist. Let’s face it, this film just sort of clumps along—veteran Lewis Milestone was more babysitter than director, trying to corral the carousing bunch and stuck filming their improvised antics—but it delivers zingy moments of Rat Pack zeitgeist, the over-the-top cigar chomping fun of Akin Tamiroff, and a terrific cast that includes Richard Conte, Cesar Romero, Henry Silva, and a (mostly wasted) Angie Dickinson, with cameos by Shirley MacLaine, Red Skelton, and George Raft. It arrives on FilmStruck as the all-woman sequel “Ocean’s 8” plays in theaters and is part of the “Director of the week: Lewis Milestone” collection of eleven features, from his early gangster drama The Racket (1928, silent with score) through his classic Of Mice and Men (1939) with Burgess Meredith and Lon Chaney Jr. and film noir The Strange Love of Martha Ivers (1946) with Barbara Stanwyck and Kirk Douglas to his remake of Mutiny on the Bounty (1962) with Marlon Brando.

Also new: five films with “Star of the Week: Liza Minnelli,” including her film debut The Sterile Cuckoo (1969, PG) and the Oscar-winning Cabaret (1972, PG), and “The Cinema of Straub and Huillet,” a collection of five features and two shorts from the intellectual art-house filmmaking team of Jean-Marie Straub and Danièle Huillet.

Two miniseries now available: the original PBS production Tales of the City (1994), based on the stories by Armistead Maupin, and the BBC version of The Diary of Anne Frank (2009) with Iain Glen and Felicity Jones.