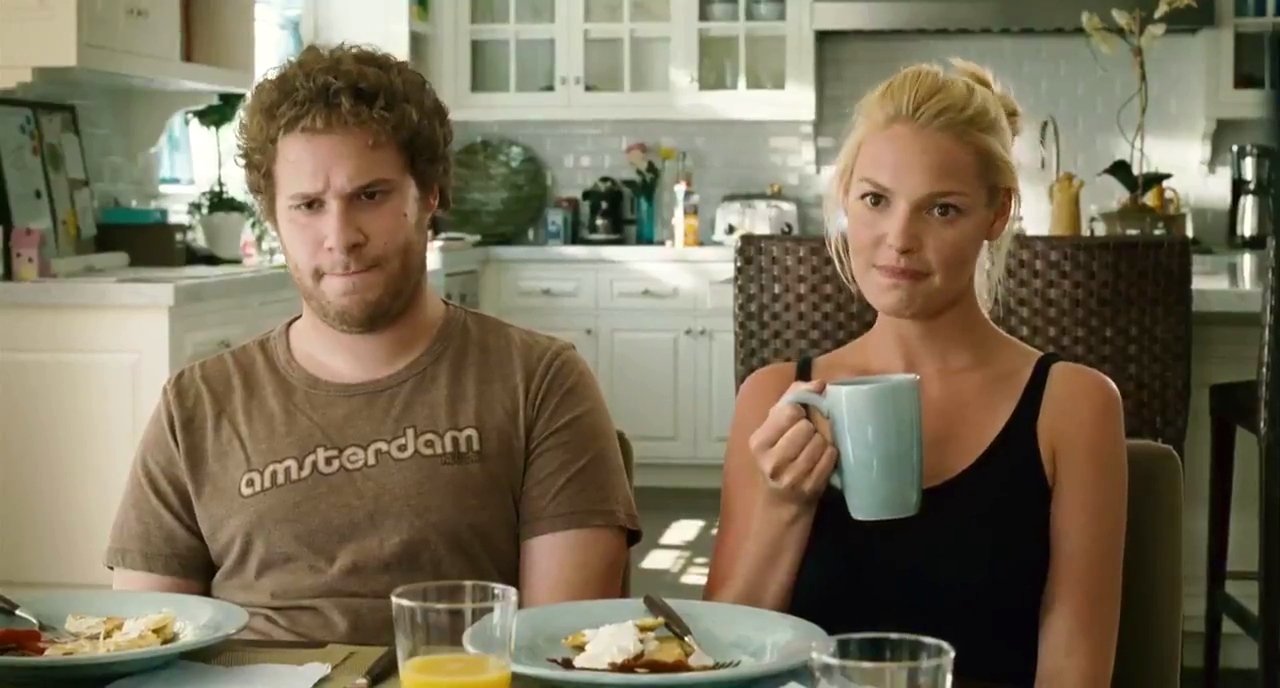 Knocked Up (2007), Judd Apatow’s follow-up to The 40-Year-Old Virgin, finds few virgins on hand. Seth Rogen is likable, laid-back slacker schlub Ben (an early version of what has become his stock in trade role), whose one night stand with the gorgeous Alison (Katherine Heigl), a TV production assistant on the road to an on-air career, leaves her with a bun in the oven. She decides to keep it (against all logic) and he kinda, sorta commits to being involved, which throws stoner Ben into the headlights of responsibility.

Apatow’s gags are strewn with crude language and extreme behavior but his humor is all grounded in character and relationships and prickly moments of self-realization and guilt, and his cast mixes it up wonderfully. Real-life buddies Jay Baruchel, Jonah Hill, Jason Segel, and Martin Starr play Ben’s roomies and inertia enablers with perfect chemistry. But it’s not all a boy’s club and the women get almost as much time to kibbitz, to goof, and to complain about what’s getting them down.

Leslie Mann (Apatow’s wife) is Alison’s sister, a party girl turned wife and mother of two in denial of her own maturity and responsibility (her kibitzing with Alison are some of the film’s sharpest moments) and Paul Rudd is marvelous as her husband, who faces his own sense of compromise as a father of two rambunctious daughters.

For a film about a single young woman with a fledgling career who chooses to follow through with her pregnancy rather than terminate it, it at least confronts the alternatives before embracing the emotionally (and perhaps hormonally) weighted choice. Apatow allows his laughs to sting a bit, and that makes the film linger after the laughter has died down.

, iTunes, GooglePlay, Fandango, Vudu and/or other services. Availability may vary by service.
Knocked Up (Unrated and Unprotected) [Blu-ray]

Blu-ray and DVD in separate R and unrated editions, plus an unrated 2-Disc Collector’s Edition with exclusive supplements, from Universal Pictures Home Entertainment, all featuring commentary. “We’re actually going to try to do a real [commentary track]. We’re not going to screw off. We’re going to really tell you stuff,” promises Judd Apatow in the opening moments. “What’s in a real commentary?” asks star Seth Rogen. Lots of stories from the set and oddball details about the stars, according to this example, which is one of the most entertaining you’ll find all year. It’s even a little informative. Co-star Bill Hader chimes in with various impressions for “guest comments,” but the most revelatory moments show you just how many comic bits were inspired by the real life experiences of Apatow and Rogen and friends.

All DVD editions also feature deleted and extended scenes (which gives you good idea of the improvisational process) and an inspired featurette starring Bennett Miller (director of “Capote”) as a gun-for-hire trying to wrestle control of the film from Judd Apatow, among the supplements. The Unrated edition features even more deleted and extended scenes and a “topless” gag scene (don’t get too excited, it’s Seth Rogen topless). The 2-Disc Collector’s Edition is highlighted by the half-hour featurette “Finding Ben Stone,” a mockumentary featuring a revolving door of ego-driven leading men blowing through the role (Michael Cera, James Franco, Justin Long, Bill Hader, and pretty much every Apatow pal on Earth). It’s the best of a fun batch of tongue-in-cheek featurettes, video diaries, and behind-the-scenes footage. Plus Katherine Heigl’s audition and even more deleted/extended/alternate scenes and gag reels.