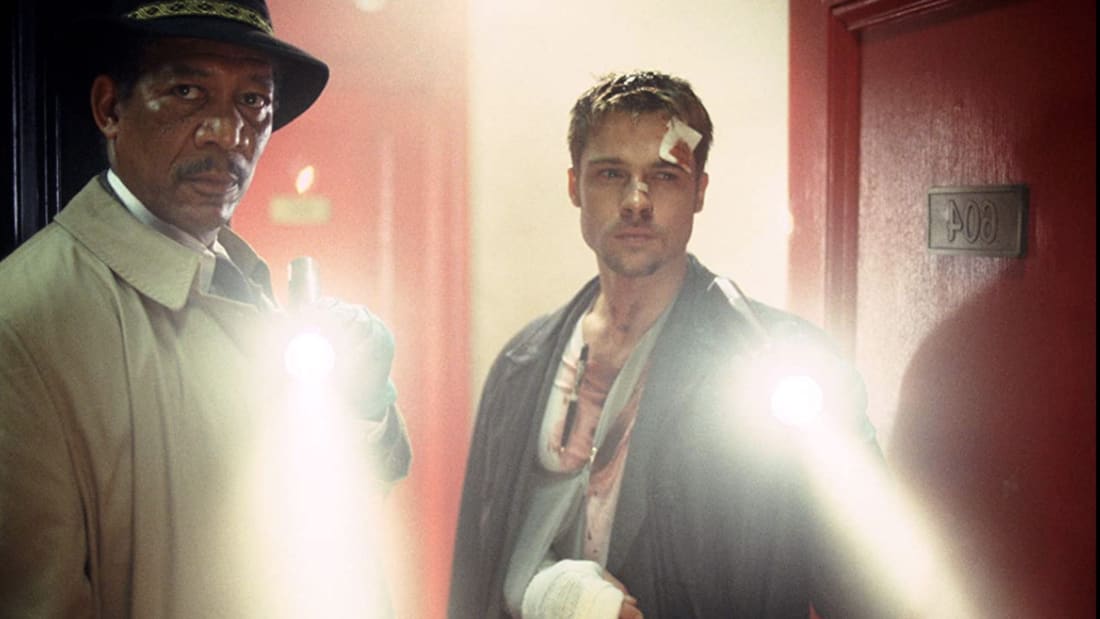 David Fincher’s Seven (1995), also spelled out as Se7en, is a meticulously crafted film about the most meticulous serial killer since Hannibal Lecter, an insane genius who draws him inspiration from the classics: Dante, Milton, Chaucer, Shakespeare.

The alienated tone is established in the jagged, jittery opening credits, set to music by Trent Reznor. The title refers, of course, to the deadly sins—lust, greed, sloth, envy, etc.—but it’s also the seven-day countdown of veteran Detective Lieutenant William Somerset (Morgan Freeman) before his retirement. He’s a reluctant mentor to the ambitious young detective David Mills (Brad Pitt), who has transferred from his upstate beat to the city, but what could have been another story of a burned-out veteran schooling the impulsive young guy gets derailed when they visit their first corpse: death by gluttony.

The killer, who appropriates the name John Doe, treats his sadistic assault on society’s “guilty” sinners like a calling, a modern campaign from a man reviving the work of an Old Testament God, passing judgment and executing the sinners of the soiled, corrupt world in excruciating. But Fincher is careful to never let us see the murders, only the crime scenes, and even the victims are discreetly (if grotesquely) shown. Fincher even keeps the identity of the actor playing the killer out of the opening credits. Not to surprise the audience with some shocking revelation, merely to keep the audience as off-balance as the characters.

The unbilled star is the gloom and doom of the setting created by Fincher and cinematographer Darius Khondji: an unidentified blight of a modern city. It’s perpetually gray and overcast, pelted with constant rain and drizzle, with interiors of drab urban decay lit with what appears to be a 10-watt bulb, accompanied by the unending urban ambience of industrial noise and never-ending traffic. It is the darkest film, literally and figuratively, to crawl out of a major studio in the 1990.

Gwyneth Paltrow is David’s young wife, miserable in the city but putting on a good face, and R. Lee Ermey, John C. McGinley, Richard Roundtree, and Kevin Spacey costar. The original screenplay is by Andrew Kevin Walker and the film earned an Oscar nomination for editing.

The deluxe Blu-ray and DVD special editions walk you through every step of the production with four thoughtful and illuminating commentary tracks, especially the production tracks hosted by film historian Richard Dyer, which are shaped into audio essays. Check out the commentary on the sound design and marvel at the periodic “illustrations” as a scene plays out sans dialogue, carried only by the score, the sound effects, and the astounding mood they set. On the second disc, dissect the opening credits, dig into storyboards of unshot alternate versions, or see just what it took to master the film to Fincher’s exacting standards for DVD.