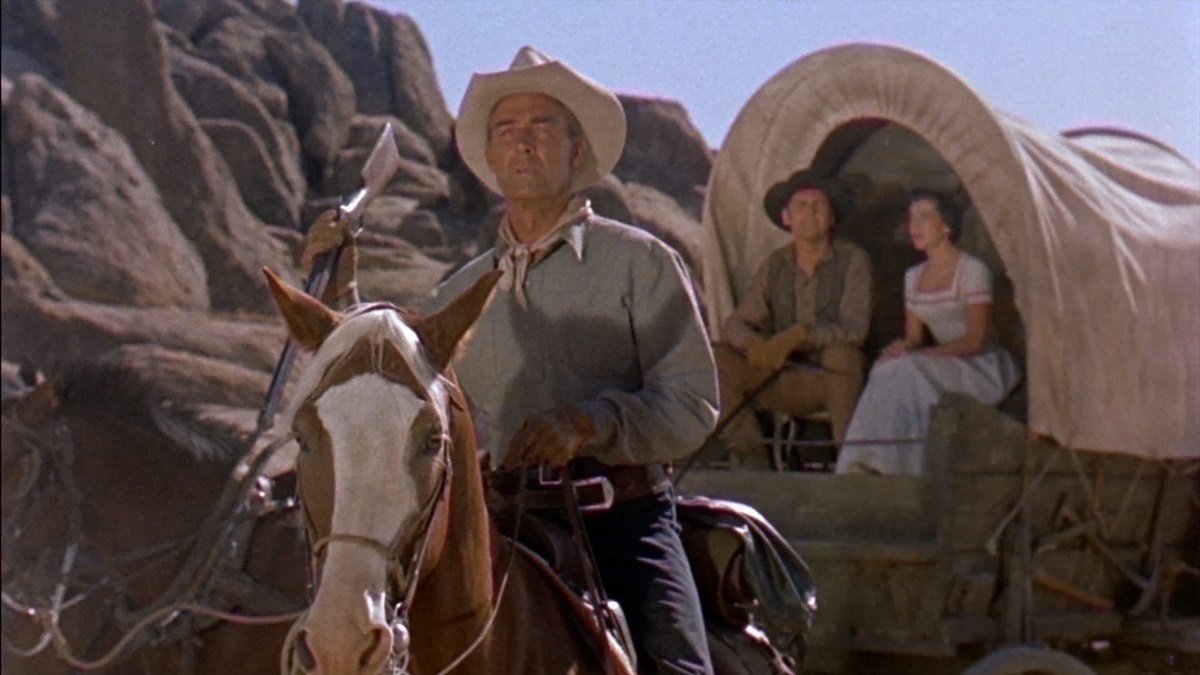 Seven Men from Now (1956) was the beginning of a beautiful partnership, the first collaboration between western movie star Randolph Scott with director Budd Boetticher and screenwriter Burt Kennedy, a creative team that made the most beautiful cycle of lean, tough, smart westerns in the fifties.

Scott stars as Ben Stride, a former sheriff tracking the men who killed his wife in a hold-up. Along the way, he becomes the unwitting guide to an ill-equipped homesteading couple (Gail Russell and Walter Reed) and an uneasy trail companion to a pair of gunslingers (a charmingly dangerous Lee Marvin and his sidekick Red Barry) on the trail of the robbery payday. It’s a simple but potent situation with a skeleton cast of characters. Kennedy’s script is at its best when tossing these characters together in isolated moments, most notably a scene where the cramped quarters of the wagon during a rainy night offers Marvin’s garrulous gunslinger Masters an opportunity to shake up the sexual tension with his lazy insults and brash insinuations in front of the husband he calls “gentle” with a condescending air.

It’s a script where every word counts, whether it’s the garrulous nonsense of husband Reed, the stinging suggestions in all of the lines that Marvin delivers with a cocky smile, or the terse, almost mono-syllabic observations and answers of Randolph Scott (who more often than not answers one question with another, like a challenge).

Boetticher matches the words with an austere style that is watertight but never obvious or ornate in its complications. He pares himself down to the rugged essentials and wrenches up the tension between the central characters, isolated in the empty desert, with remarkable economy. He makes Kennedy’s dialogue sing like lyrics and turns Scott “limitations” as an actor into a defining element of character: inexpressive and inflexible, his flat gravel voice masking his feelings and his lanky body perfectly at ease setting a horse or handling a gun, but less sure in moments of emotional intimacy. And he turns the expressive landscape of Lone Pine into a defining element of the film, a harsh and unforgiving but pure world outside society where Scott’s character is almost sadly at home.

The rather conventional afterward doesn’t really feel all that convincing. Kennedy’s subsequent scripts make no pretense of a social redemption and in later films, Scott becomes (to borrow from another film) a veritable prisoner of the desert. But it is a perfectly satisfying coda to a magnificent western, one that was barely recognized in its own time but has since become prized as one of the great westerns of the 1950s. Or any era, for that matter.

Boetticher reunited with Scott for six more movies, five of them produced by Scott’s own company (The Tall T, 1957, Decision at Sundown, 1957, Buchanan Rides Alone, 1958, Ride Lonesome, 1959, and Comanche Station, 1960), three of them from scripts by Kennedy. The series has been dubbed “The Ranown Cycle,” named after the production company created by Scott and partner Harry Joe Brown.

All are currently featured on Criterion Channel in the series “The Ranown Westerns.”

For more, read Terence Rafferty on Seven Men From Now and the Ranown Cycle

Also on DVD and on SVOD through Amazon Video, iTunes, GooglePlay, Fandango, Vudu and/or other services. Availability may vary by service.
7 Men from Now [DVD]