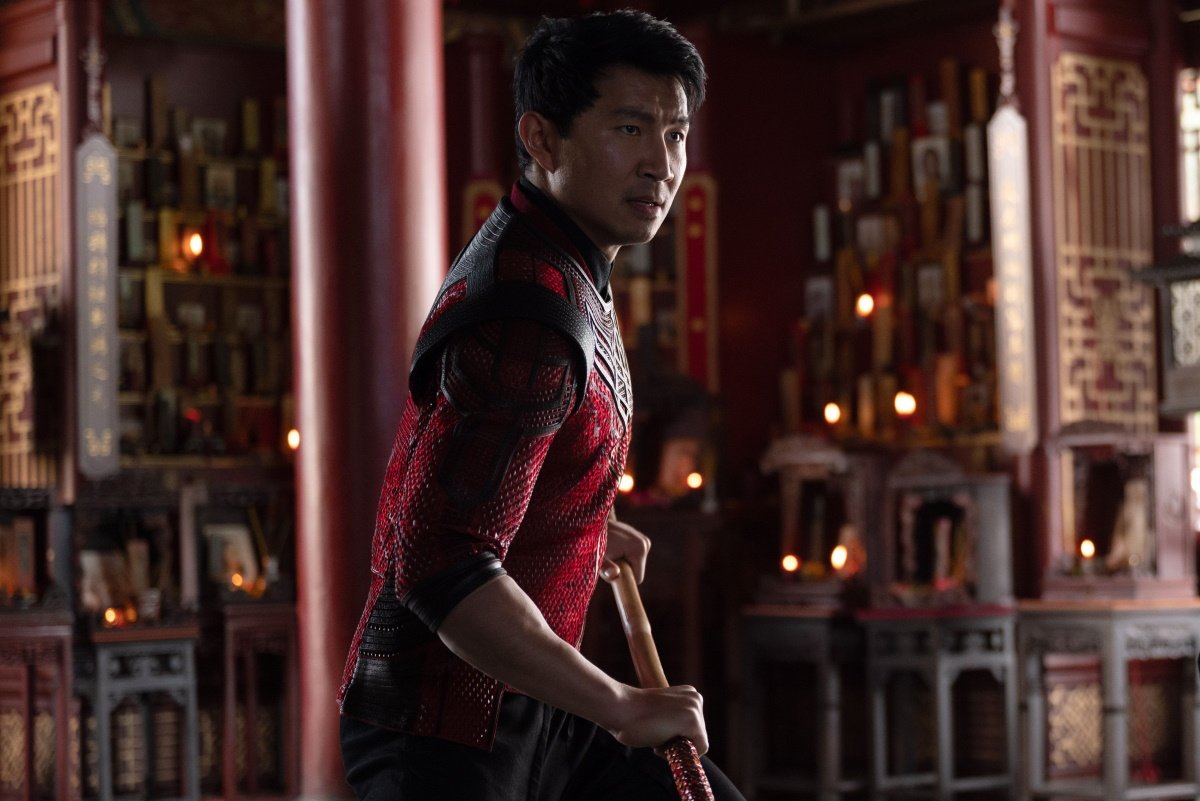 November 12 is Disney+ Day, featuring the launch of numerous new shows, originals features and shorts, and the streaming debut of the big screen Marvel movie “Shang-Chi and the Legend of the Ten Rings“ (2021, PG-13). Simu Liu stars as the martial arts fighter from the cult comic book “Master of Kung Fu” in an action fantasy involving a criminal cabal, a runaway scion, and a family destiny that sets him against his immortal villain of a father (Tony Leung). Directed by Destin Daniel Cretton, it features Awkwafina, Michelle Yeoh, and Chinese pop star  Meng’er Zhang. (Disney+)

In “Passing“ (2021, PG-13), Tessa Thompson and Ruth Negga play African American women in 1929 New York who can pass for white but choose to live on opposite sides of the color line. The directorial debut of Rebecca Hall also stars André Holland and Alexander Skarsgård. (Netflix)

Paul Rudd is “The Shrink Next Door“ (TV-MA), an insidiously manipulative psychiatrist who insinuates himself so deeply into the life of his patient (Will Ferrell) that he gains control of his personal finances. The limited series is based on a true story, which makes it all the more fascinating. Kathryn Hahn and Casey Wilson costar. New episodes on Fridays. (Apple TV+)

The murder mystery “Ragdoll: Season 1“ (not rated) stars Henry Lloyd-Hughes, Thalissa Teixeira, and Lucy Hale as London police detectives on the trail of a serial killer who sews the dismembered parts of its victims into grotesque body to taunt the cops. New episodes on Thursdays. (AMC+)

Michael C. Hall returns as the serial killer who targets other serial killers in “Dexter: New Blood“ (TV-MA), a revival of the crime thriller with a darkly comic dimension that ended in 2013. New episodes on Sundays. (Showtime)

Based on true events, “Beans“ (2021, not rated) dramatizes the 78-day standoff between two Mohawk communities and government forces in 1990 in Quebec.

Danny Glover produces and stars in “The Drummer“ (2021, not rated), a drama that explores the traumatic effects of war on military veterans through three interwoven stories.

The paths of a gang of street kids and scientists dabbling in forbidden magic cross in “Arcane: Season 1“ (TV-14), an animated science fiction fantasy based on the hit video game. Features the Voices of Hailee Steinfeld, Latie Leung, and Kevin Alejandro. Three episodes available, new episodes each Saturday.

A working class teenager from rural Brazil becomes a virtual slave when takes a job in São Paolo in the drama “7 Prisoners“ (Brazil, 2021, R, with subtitles). Directed by Alexandre Moratto and starring Rodrigo Santoro.

Rose Reid is a classical music student and Jedidiah Goodacre an action star in “Finding You“ (2021, PG), a romantic comedy about two young Americans falling in love in Ireland.

The documentary “The Meaning of Hitler“ (2021, not rated) delves into the continuing fascination with Adolph Hitler and Nazism.

Robin Wright directs and stars in “Land“ (2021, PG-13) as a grieving woman who moves off the grid to a cabin in the Rockies.

An elite commando team goes deep into the jungle to take out to leader of a rogue squad in “A Thousand Fangs: Season 1“ (Columbia, not rated, with subtitles). New episodes on Thursdays.

Additional Disney+ Day offerings include the original holiday comedy “Home Sweet Home Alone“ (2021, PG) with Ellie Kemper, Rob Delaney, and Archie Yates and the musical drama “Intertwined: Season 1“ (TV-G) , about an aspiring musical comedy star (Carolina Domenech) who travels back in time and meets her mother at her age. All episodes streaming.

Also new is the animated series “Olaf Presents: Season 1“ (TV-PG) for young kids, a slate of animated shorts, and 13 Marvel movies presented in the IMAX format.

“Harriet the Spy: Season 1“ (TV-G), an animated adaptation of Louise Fitzhugh’s classic children’s novel set in 1960s New York, features the voices of Beanie Feldstein as the adventurous 11-year-old and Jane Lynch as her no-nonsense nanny. New episodes on Fridays.

Bruce Willis plays a hunted man in the action thriller “Apex“ (2021, not rated), which streams the same day it arrives in theaters.

“Between Us Girls: Bonds Between Women” is a collection of 20 films centered on female relationships, from the playfully satirical “Daisies“ (Czechoslovakia, 1966) and fantastical mystery “Céline and Julie Go Boating“ (France, 1974) to the modern anxieties and stresses of “Girlhood“ (France, 2014) “Mustang“ (Turkey, 2015) (all not rated, with subtitles). It includes special edition presentations of Sofia Coppola’s “The Virgin Suicides“ (1999, R) with interviews and featurettes and “Ghost World“ (2001, R) with commentary, interviews, and deleted scenes.