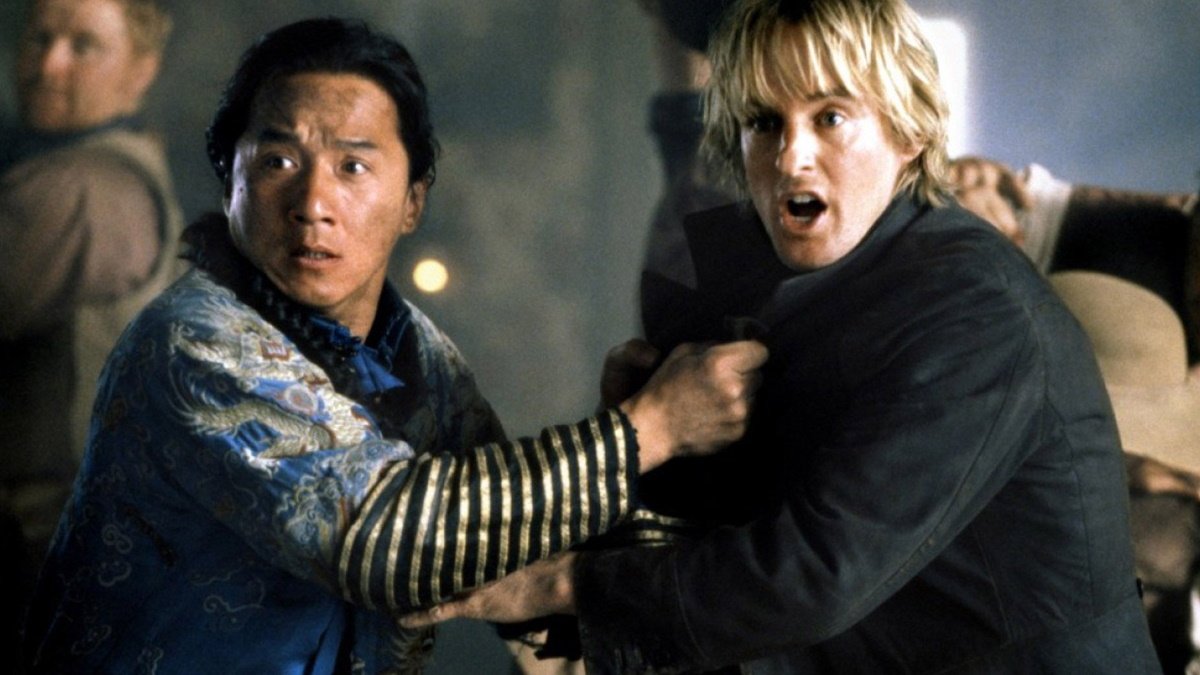 Jackie Chan became an international action star without the help of Hollywood when he brought blockbuster movie values to his brand of martial arts action and comedy in a series of Hong Kong hit action spectacles in the 1980s and 1990s. By the time Hollywood made a second attempt to launch him in American movies, starting with the buddy cop film Rush Hour, he was aging past his fighting prime but still a joy to see in action.

Shanghai Noon (2000) sends him back to the old west as Chon Wang, a boyishly sincere Forbidden City Palace Guard in love with unattainable Princess Pei Pei (Lucy Liu in an unusually docile performance). Seduced by romantic English fairy tales, she “escapes” to America, but her benefactors are not as altruistic as they seem: a ransom note is left in her wake. Lovesick Chon accompanies the official retinue bearing the ransom to Nevada where he foils a train robbery, marries into a wry Sioux tribe after sucking too long on a peace pipe (“It could be worse,” muses a tribal elder, “it could be a white guy”), inherits a horse smarter than Trigger, and adopts both a guardian angel and an unlikely sidekick.

Owen Wilson is laidback outlaw Roy O’Bannon, a gentle philosopher-train robber who couldn’t hit the side of the Rockies with a rifle. Left for dead by his cutthroat gang, Roy and Chon keep crossing paths, trading blows and banter, until Roy hitches onto Chon’s quest with hopes of pocketing a little royal gold for himself. Meanwhile there’s a bounty on their heads and a steely-eyed marshal on their trail (Xander Berkeley, cutting a sharp figure as a corrupt lawman in black). It’s going to take more than one death-defying escape to get this gang who couldn’t shoot straight to their princess.

Director Tom Dey strikes the right balance between white hat/black hat showdowns, spirited action scenes, and anachronistic tongue-in-cheek punchlines (“My name is Chon Wang.” “John Wayne? That’s a terrible cowboy name!”). Jackie’s furious moves are more often comic displays of acrobatic slapstick than deadly showdowns, but he tenses for the climactic fight to the finish with a determined seriousness, his grin turning grim and his eyes narrowing in concentration. The rest of the time, he turns this silly little action comedy into a high-spirited, butt-kicking good time.

Of course it spawned a sequel: Shanghai Knights, which takes Chon and Roy to London.