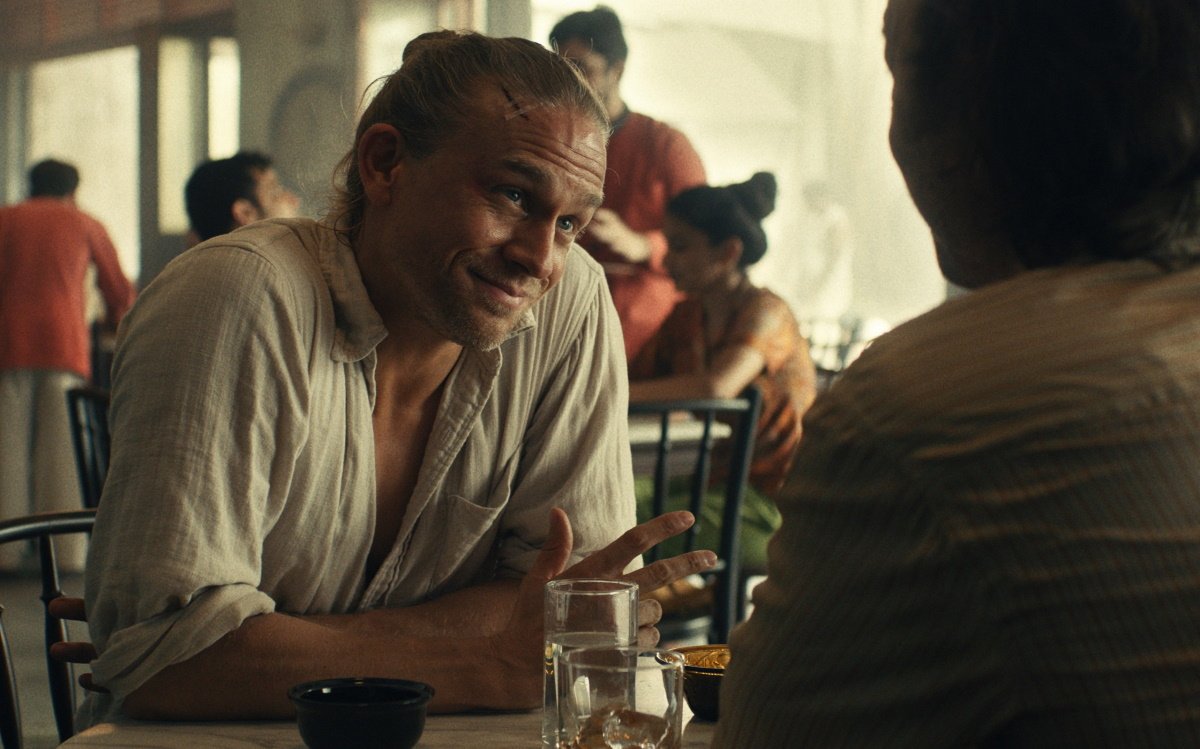 Based on the international best-seller by Gregory David Roberts, “Shantaram: Season 1” (TV-MA) follows the journey of Lin Ford (played by Charlie Hunnam), an Australian fugitive and former heroin addict who flees to India. As he tries to lose himself in the chaos of 1980s Bombay, he becomes involved in the slum community of his new home and begins a journey of redemption. It’s developed for streaming TV by Steve Lightfoot (“The Punisher”) and costars Antonia Desplat, Elektra Kilbey, Alexander Siddig, and Sujaya Dasgupta. Three episodes available, new episodes on Fridays. (Apple TV+)

Railey Gilliland and Seazynn Gilliland plays twins and future pop stars Tegan and Sara Quin in “High School: Season 1” (2022, TV-14), a teen dramedy based on their autobiographical book. The coming-of-age story, set in 1990s Calgary, follows the siblings as they enter a new school, discover a new world of music, and struggle to define their identities and their tastes. Clea Duvall cowrites and directs the show and Cobie Smulders costars as their divorced mother. Four episodes available, new episodes on Fridays. (Amazon Freevee)

The romantic comedy “Rosaline” (2022, PG-13) retells Shakespeare’s “Romeo and Juliet” from the perspective of Juliet’s cousin Rosaline (Kaitlyn Dever), who tries to break up the fledgling romance and win back Romeo. Adapted from the novel “When You Were Mine” by Rebecca Serle, it costars Minnie Driver and Bradley Whitford. (Hulu)

Idris Elba is a father of two teenage girls who is thrust in a fight for survival in “Beast” (2022, R), a thriller set at a game reserve in South Africa where an abused, angry lion hunts humans. Directed by Baltasar Kormákur, it costars Iyana Halley, Leah Jeffries, and Sharlto Copley. Also on DVD and at Redbox. (Peacock)

The violent and surreal Viking adventure “The Northman” (2022, R) stars Alexander Skarsgård as the Viking prince on a mission of revenge against the man (Claes Bang) who murdered his father and usurped the throne. Filmmaker Robert Eggers draws from the ancient Danish tale that inspired Shakespeare’s “Hamlet.” Nicole Kidman, Ethan Hawke, and Anya Taylor-Joy costar. (Prime Video)

B.J. Novak writes, directs, and stars in the dark comedy “Vengeance” (2022, R), a witty satire about an aspiring New York podcaster who finds a story in a remote, impoverished Texas town filled with eccentric characters. Also streaming on Peacock.

The indie drama “To Leslie” (2022, R) stars Andrea Riseborough as a struggling single mother who wins the lottery and loses everything—including her friends—and Marc Maron as a lonely motel clerk who helps when no one else will.

Available same day as select theaters nationwide is “Piggy” (Spain, 2022, not rated, with subtitles), a violent horror/thriller about a bullied teenage girl who sees her tormenters abducted by a killer.

The thriller “Blackout” (2022, TV-MA) stars Josh Duhamel as a man who wakes up in a hospital and finds himself hunted by the cartel.

International TV: the limited series “The Playlist“ (Sweden) dramatizes the true story of a Swedish tech entrepreneur and his partners who challenged the status quo by offering free and legal streamed music around the world. Also new:

A blind athlete (Skyler Davenport) takes on a group of brutal home invaders with the help of an army veteran connected with a video call app in the thriller “See For Me“ (2021). More newly-arrive horror films:

Streaming TV: the second season of the comedy “Avenue 5“ (TV-MA) takes us back to the luxury space ship stranded far from Earth.

Russell Crowe in “Noah“ (2014, PG-13) in Darren Aronofsky’s film of the Old Testament story of the flood and the ark. (Prime Video and Paramount+)

The limited series documentary “I Love You, You Hate Me“ (not rated) presents the untold story of the children’s show icon Barney the Dinosaur.

In “Dark Glasses“ (Italy, 2022, not rated, with subtitles), the first feature from horror movie legend Dario Argento in a decade, a blind woman and a young boy flee a serial killer. (AMC+ and Shudder)

A woman (Alice Krige) discovers the power to exact revenge in her dreams in “She Will“ (2022, not rated), costarring Malcolm McDowell. (AMC+ and Shudder)

Lucy Lawless returns in the playful mystery series “My Life is Murder: Season 3“ (not rated).

“Horror Noire: Season 1“ (not rated) takes a deep dive into Black Americans in Hollywood through their connection to the horror genre,

The 18 films featuring “Vampires” in Criterion Channel’s October line-up span almost a century, from the landmark “Dracula“ (1931) with Bela Lugosi to Ana Lily Amirpour’s indie horror “A Girl Walks Home Alone at Night“ (2014). In between are such cult oddities as the Spanish-language version of “Dracula“ (1931) shot on the same sets as the Lugosi classic and “Blacula“ (1972, PG) with William Marshall, Kathryn Bigelow’s feral southwestern thriller “Near Dark“ (1987, R) and the offbeat black comedy “Vampire’s Kiss“ (1988, R) with Nicolas Cage, Werner Herzog’s loving remake “Nosferatu the Vampyre“ (Germany, 1979, PG, with subtitles), and the adolescent vampire thriller “Let the Right One In“ (Sweden, 2008, R, with subtitles). There’s a whole world of undead bloodsuckers in this collection.

Sam Fuller’s “Forty Guns“ (1957), starring Barbara Stanwyck as a cattle baron with a small army of armed riders, is one of the wildest westerns to explode out of the 1950s. It’s presented with supplements from the special edition disc release, including the feature-length documentary “A Fuller Life” and bonus interviews.

The documentary “Invisible Essence: The Little Prince“ (2018, not rated) looks at the origins of the beloved novel and the life of its author.

The documentary “Free Chol Soo Lee“ (2022, not rated) revisits the case of a Korean immigrant who was convicted of a murder he didn’t commit and the years it took to reveal the truth.

International horror: twin brothers suspect that their mother, who returns home with her head bandaged like a mummy, is an imposter in “Goodnight Mommy“ (Austria, 2014, not rated, with subtitles) and Kiyoshi Kurosawa’s “Pulse“ (Japan, 2001, with subtitles) is still one of the most unsettling horror films ever made.