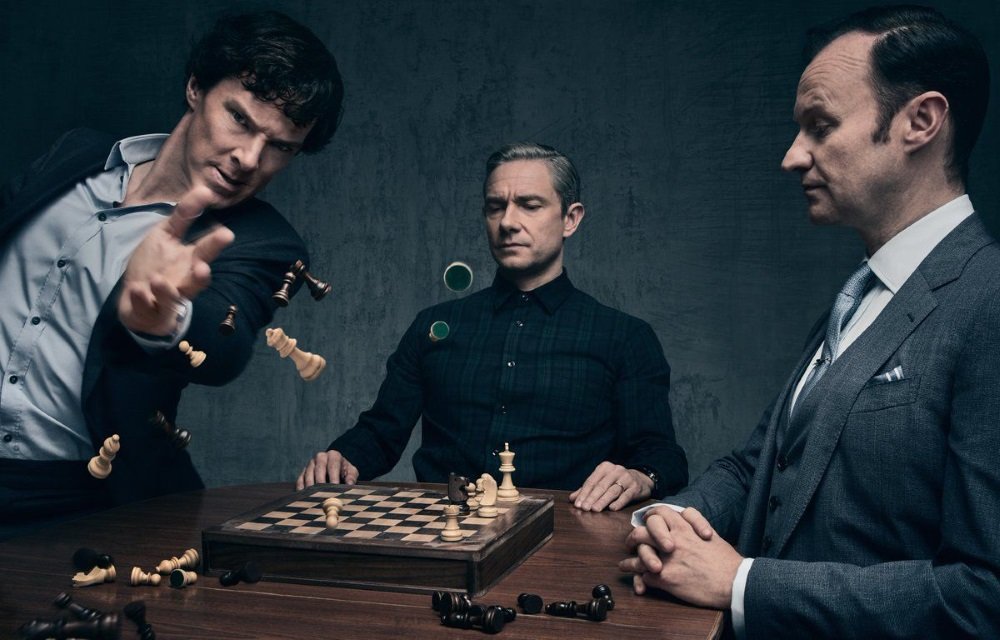 While there has been no official announcement, it sure feels like Sherlock: Series 4 (2016) brings the BBC’s 21st century reworking of Sherlock Holmes, with Benedict Cumberbatch as the world’s greatest consulting detective and Martin Freeman as the loyal Dr. John Watson, to a close. And perhaps it’s about time.

The series, developed and created by Doctor Who showrunner Steven Moffat and actor/writer Mark Gattis (who also plays Mycroft), began in 2010 as a fresh, energetic, inventive updating of the characters created by Arthur Conan Doyle. Cumberbatch plays the flamboyant misanthrope genius as a performance artist who holds his audience in contempt and Freeman makes Watson, the veteran military doctor returning from Afghanistan (in both Doyle’s original stories and the modern update), the warm, humanizing influence as his witty and highly observant roommate, sidekick, sounding board, and soldier. The feature-length episodes riffed on Doyle’s original stories with new plots (which became increasingly byzantine and bizarre) while the Holmes universe played with a dotty but devoted Mrs. Hudson (Una Stubbs), a professional and protective Lestrade (Rupert Graves), sinister criminal genius Jim Moriarty (Andrew Scott), and Watson’s bride Mary (Amanda Abbington), in this incarnation a former government agent with a very eventful history.

At its best it is ferociously watchable, wittily written and produced with a visual invention that engages 21st century technology as yet another tool in Holmes’s hands. Yet it also holds a complicated place among fans for its mix of ingenuity and excess and its wildly uneven track record, culminating in a frustrating final season. It took four seasons to turn “high-functioning sociopath” Sherlock Holmes into a human being, not just a great man but a good one, but in the process Moffat and Gattis turned Doyle’s well-ordered world of logic and deduction into a surreal universe of comic book supervillains and absurdly complex schemes in the realm of scriptwriter fantasy. The fourth season dives into wild invention, shameless misrepresentation, and logical deduction that pushes the limits of Doyle’s motto: “When you have eliminated the impossible, whatever remains, however improbable, must be the truth.”

It all comes to its apex in the fourth season finale “The Final Problem,” a maniacal mind game that plays like a remake of Saw as directed by The Joker. And yet brief moments between Sherlock and Watson drawing strength from one another to carry on, and even a moment of fraternal love between Sherlock and Mycroft, capture the depth of their relationships with an unexpected resonance. It’s touches like this that kept me going even as the show seemed determined to turn Holmes into another Doctor Who. That and the undeniably entertaining performance by Cumberbatch. It’s no coincidence that he’s in such demand that he’s simply unavailable for more stories.

Three feature-length episodes in the fourth and (probably) final series.