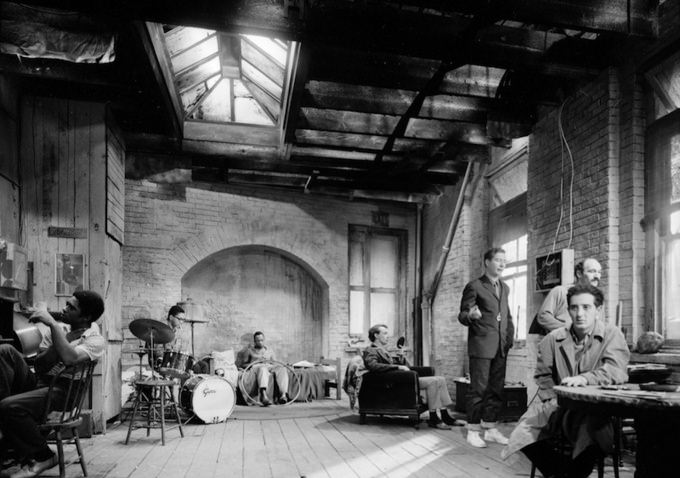 The Connection (1962), the debut feature from Shirley Clarke, turns a stage play originally produced by New York’s revolutionary Living Theater as a play within a play into an innovative work of cinema.

Clarke was a pioneering American independent filmmaker before that label was even invented and her work was unpreserved and largely unavailable until Milestone Films undertook Project Shirley, their program to restore and rerelease (in theaters and on home video) the work. This was actually their third release—the documentaries Portrait of Jason (1967), a landmark of queer cinema, and Ornette: Made in America (1985), were ready before The Connection—but it really is ground zero for the project and her career.

In this adaptation, a filmmaker and his cameraman (William Redfield and a largely off-screen but present Roscoe Lee Brown in his film debut) film a group of junkies in a New York loft as they await to score heroine (paid for by the filmmakers) from their drug dealer, a flamboyant character named Cowboy (Carl Lee). While they wait, the men trade-off delivering soliloquies to the camera, a jazz quartet (which includes composer Freddie Redd on piano and brilliant sax solos by Jackie McLean, both reprising their roles from the stage play) periodically launches into impromptu jams, and the director spouts off about film theory and authenticity without having any idea about the world he’s trying to capture. They alternately provoke the filmmaker, who has never so much as a taken a puff of marijuana, and perform for the prowling handheld cameras, and then slip off to the bathroom to discretely shoot up.

Experimental theater meets cinéma verité with a self-aware sensibility: drama in documentary form. The cameras never leave the derelict loft yet the film is constantly in motion, whether it’s the restless movements of the actors or the handheld camerawork, constantly picking out characters and details, and Clarke’s editing gives the film a rhythm that rises and falls like a sustained piece of music. It wasn’t the first American film to take a serious look at drug use but it was the rawest to date and it faced censorship battles due to language that today is tame. Most of the cast member reprise their stage roles and bring a theatricality to their performances, which Clarke emphasizes. The film is as much about performance (as actors, as characters, as junkies doing what they need to do for a fix) as it is about addiction and the culture of these down-and-out men. Like her later film Portrait of Jason, it collapses the space between personality and performance. It’s also a pioneering “found footage” film, presented as if it’s simply a rough assembly of raw footage shot by the filmmakers on 16mm, though the strong images are very much sculpted in light and preserved on 35mm. The film is actually quite handsome.

, iTunes, GooglePlay and other services. Availability may vary by service.
The Connection [Blu-ray]

Milestone Films restored the film to near pristine condition (a few minutes show minor wear) and includes illuminating supplements on Blu-ray and DVD. There’s a slideshow gallery of behind the scenes still set to music from the film, home movies shot on the set during the last day of filming, interviews with art director Albert Brenner and actor / musician Freddie Redd. Note that the 1959 radio interview listed on the case was left off the disc, apparently due to poor audio quality.