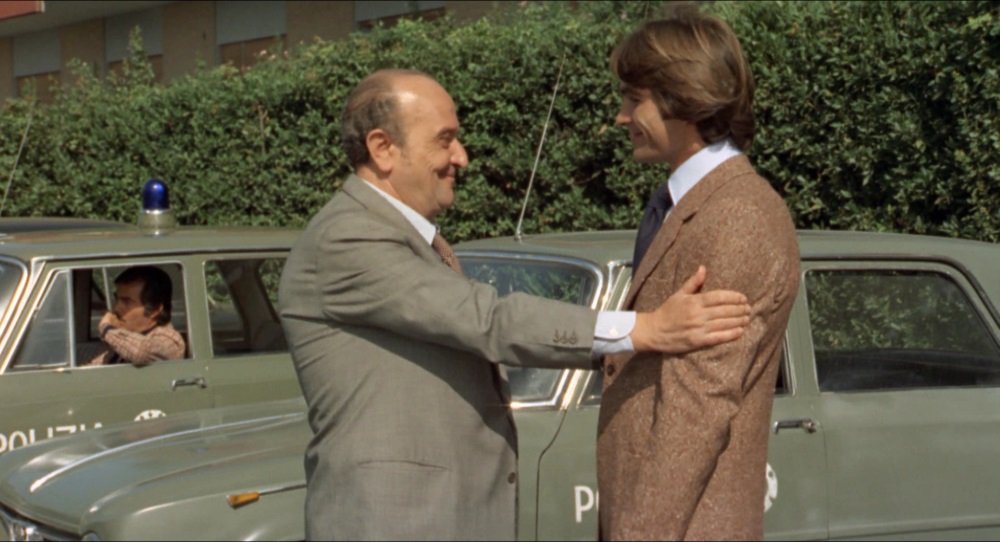 Shoot First, Die Later (Italy, 1974), directed by Italian gangster specialist Fernando di Leo, stars Luc Merenda as Domenico Malacarne, a hotshot cop on the Milan strike force. Young, good looking, and always at the center of big, splashy cases, Domenico is the department poster boy for police heroism and he kicks off the film with a ferocious car chase that rivals The French Connection. (It’s the first of two riveting sequences coordinated by French stunt driver Remy Julienne, both among most impressive car chases I’ve seen in seventies cinema.)

Little does the media or his own father, a modest and idealistic career cop in a sleepy station in a Milan suburb, know that he’s on the take. Not until a request from the mob puts him in a compromising position and his father in the cross-hairs of the mob.

This is another of di Leo’s gritty, violent dives into the underworld but this time the conflicts are more personal. Domenico of course gets pulled farther into the tentacles of mob demands, and he’s tainted enough to know there are some things he can’t refuse. But when his old man is killed by a local lieutenant cleaning up loose ends of a minor conflict, Merenda goes on a mission of revenge against the mob and its business-like boss (Richard Conte), who negotiates the crisis with ruthless aplomb after his underlings botch the job. The brutal business of mob enforcement is executed with unflinching directness. They don’t simply take care of an inconvenient witness, they complete the job by taking out the man’s beloved cat with the same weapon.

In a di Leo film, it’s the collision of the unpredictable nature of character with the impersonal code of mafia business that complicates things, and revenge is always big, bloody, and violent. Domenico doesn’t have much dimension as a character – he’s just a guy who thrives on the adrenaline of a dangerous assignment and lives beyond his salary on the payoffs from the mob as if he’s earned it – but he takes the condemnation of his father, who disavows him even as he compromises his own code to help his son, like a slap. It’s drippy melodrama, soaked in a weepy, sentimental guitar theme, but it shows us that Domenico actually cares about something or someone. The combination of guilt and fury that fuels his rampage in palpable.

American cop heroes of the seventies, especially those played by Clint Eastwood and Charles Bronson, were mavericks, outcasts, idealists, and obsessives, but they were always focused on justice, however they defined it. Domenico has no such moral line. This compromised cop stops justifying his corruption only when he’s crossed by his paymasters. It’s not justice, it’s revenge, but since he’s avenging an innocent and taking out the bad guys, he’ll do as the hero in this equation.

Not rated, in Italian with English subtitles

Raro’s Blu-ray and DVD release is mastered from the original 35mm negative. It looks a little rough but that’s just the nature of the film. Also includes a 25-minutes interview featurette with director Fernando di Leo and a 21-minute interview featurette with actor Luc Merenda, assistant director Franc Lo Cascio, and editor Amedeo Giomini, which discuss the genre in general rather than the film specifically, and a booklet with notes that appear to be translated from Italian with some awkwardness. The disc is also included in Raro’s second DVD box set of Fernando di Leo gangster movies.