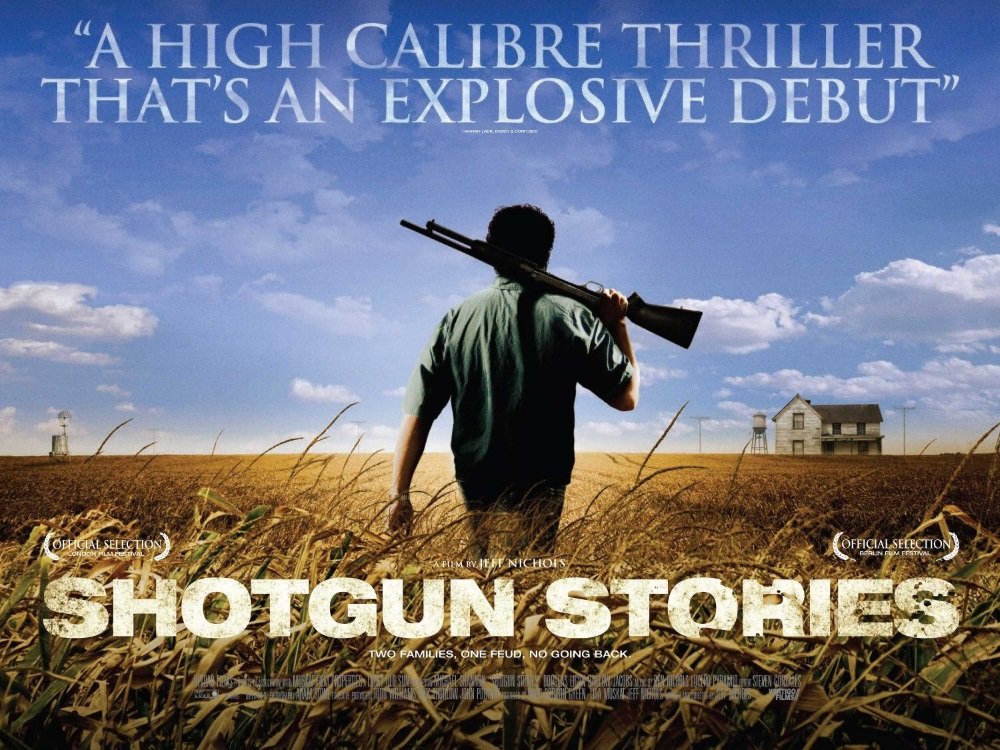 Arkansas-born director Jeff Nichols has carved out a terrific career making distinctive films with a personal commitment and a personal take on American Southern culture: Take Shelter (2011), Mud (2012), Midnight Special (2016), and the Oscar-nominated Loving (2016). It all begins with his debut feature Shotgun Stories (2007)

The story revolves around three adult brothers—Son, Kid and Boy—in a rural Arkansas “dead-ass town” (in the words of the characters) who hold on to each other because they have no other family to speak of. Their abusive, alcoholic father walked on them decades before and then, after getting religion and getting straight, started from scratch with a new family. Their mother, an angry, bitter woman, raised them to hate their father and their estranged half-brothers, the boys who received his love. The film opens in the wake of the father’s death, which brings the old resentments to the surface and prompts the eldest brother, Son (Michael Shannon), to speak his mind at the family funeral. His public display of contempt stirs the resentments to action and the grudge becomes a family feud that, inevitably, leads to violence.

It could all play out as classic tragedy by way of Hatfield and McCoy’s clan war but the film remains modestly focused on the people and their lives. This is not about righteous vengeance (despite the Bible-belt backdrop), but long-simmering anger and resentment spilling out with fatal consequences. Nichols keeps almost all of the violence off screen, suggesting the escalation in discreet shots and loaded images. He’s more interested in the people as they push the conflict to greater levels and then face the physical and emotional consequences of the escalating war.

Nichols’ original take on classic themes of vengeance and retribution is dropped into a world of real people struggling with the real problems of making a living, taking responsibility for families and dealing with the betrayals of the past. Nichols and cinematographer Adam Stone create simple, spare, evocative imagery that captures both the gentle landscapes and the desolation of the hard existence in this depressed town in handsome widescreen.

It was nominated for the John Cassavetes Award at the 2008 Independent Spirit Awards and Roger Ebert championed the film, giving it a spot in Ebertfest, a film festival he created to celebrate overlooked and underappreciated films.