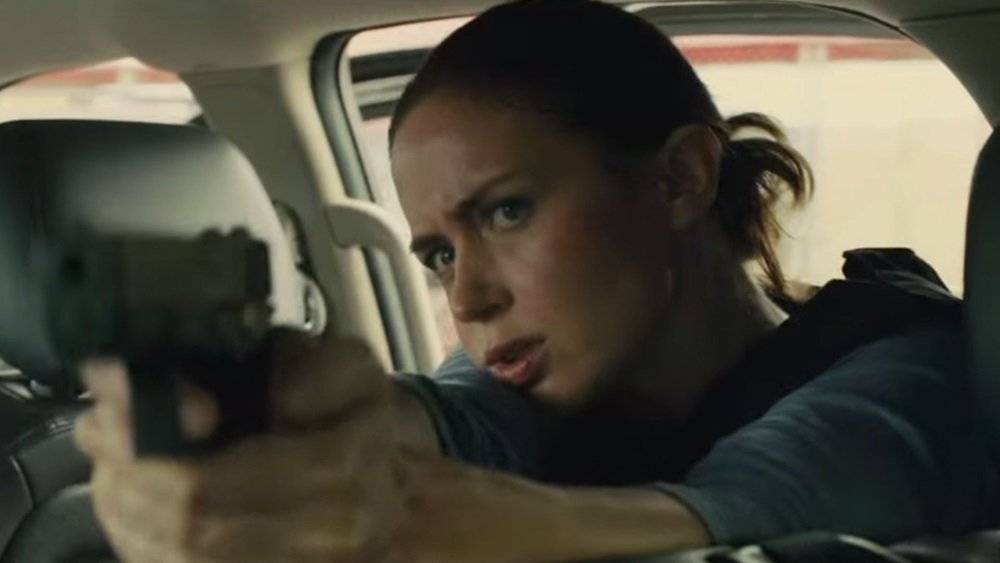 Sicario (2016), a violent, chaotic, adrenaline-fueled thriller set in the brutal violence of the drug war on the American border with Mexico, is a film that constantly seems to be spinning out of control. That’s not entirely by design, I fear, but it is purposeful. From the opening scene, where a missing persons rescue operation headed by FBI Agent Kate Macer (Emily Blunt) sends the team into a Mexican drug cartel safehouse, a sinister mausoleum hidden behind the chalkboard the walls, and a booby trap that takes the life of one of her men, we are thrown into a world where the rules no longer apply.

We are suddenly tossed along with Macer, a driven but idealistic veteran of an FBI strike force, into what appears to be a black ops campaign driven by the CIA. She is requested by a cagey company man named Matt (Josh Brolin, who tosses off his evasions with an amiable grin that hides his endgame), ostensibly an “advisor from the DOD,” and like her we are racing to keep up with the events. Borders are crossed (both physical and moral), information is withheld, and she suspects something bigger (and likely illegal) under the official cover of the operation. The American team has apparently chosen to fight the Mexican cartels with their own tactics, acting on information and advice from a former cartel man with a score to settle with the Mexican mob. Benicio Del Toro plays the advisor, Alejandro, holding his cards close to his chest but never lying to Macer.

This is a world of sudden violence and brutal retaliation, yet apart from the opening scene, Macer is a frustratingly passive character in the midst of the action. She’s a proven warrior yet mostly serves as witness to the events, a point of view character and the moral high ground in a war where the rules of engagement are at best ambiguous.

Director Denis Villeneuve, a Québécois filmmaker who came stateside to direct Prisoners and Enemy in 2013, tends to ignore the holes and inconsistencies in Taylor Sheridan’s screenplay and focuses on the combustible atmosphere. This is a film built on a foundation soaked in nitroglycerin; every situation seems pitched on the verge of combustion. Early in the film, as they drive a recently captured suspect back over the border to the American side, the caravan gets blocked in the traffic crunch at the checkpoint. Every car around them carries a potential cartel soldier and Villeneuve brilliantly orchestrates the tension as all eyes rake the freeway for threats.

It’s that tension, enhanced by Villeneuve’s constant surveillance of every space these characters inhabit, as if viewing the world through their military vigilance, that keeps the film walking the knife’s edge and keeps the audience riveted to every scene. You never know when things will explode. You just know they will.

, iTunes, GooglePlay and/or other services. Availability may vary by service.
Sicario [DVD]

The Blu-ray and DVD releases from Lionsgate include four production featurettes (running just over 50 minutes together) and Ultraviolet Digital copies of the film.