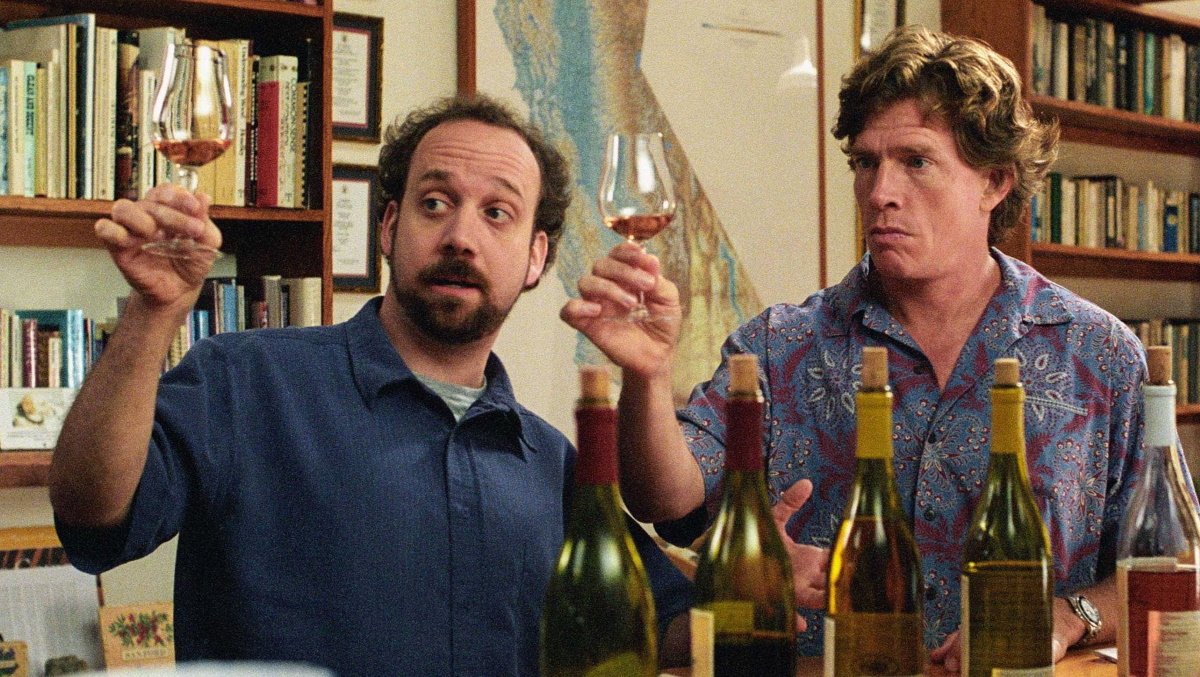 “A bottle of wine is actually alive; it’s constantly evolving and gaining complexity. That is, until it peaks – like your ’61 – and begins its stead, inevitable decline. And it tastes so f***ing good.”

Sideways (2004), Alexander Payne’s road movie about best friends taking a bachelor party on the road through California vineyard country, is a modern buddy film with a seventies sensibility. Its richness radiates out from its seeming simplicity and the resonance of complex relationships with comic edges, and is lubricated by the wine that flows through the film.

The tasting tour is a wedding present from best man and wine aficionado Miles (beautifully played by Paul Giamatti under his trademark black cloud of anxiety and depression), an English teacher and unpublished novelist bumping up against frustration and regret, to randy groom Jack (Thomas Hayden Church), a second rate actor on the downside of his career peak.

When Miles makes an unexpected connection with Maya (Virginia Madsen in a lovely career-reviving performance), regret turns to hope and possibility. Meanwhile Jack sees the trip as less a time to bond with Miles than to squeeze in last minute pre-marital sex. He’s practically pathological with his reckless affairs, leaping into the maw of self-destruction until he really sabotages his upcoming nuptials.

The film swept the Film Independent Spirit Awards, wining six top awards including best feature and acting awards for Giamatti, Madsen, and Church, and Payne and screenwriting partner Jim Taylor took home the Best Adapted Screenplay Academy Awards for their deliciously scripted dialogue. Giamatti was robbed when the Academy didn’t even nominate his performance, but he took home well deserved awards from over a dozen film critics organizations, as did Oscar-nominated co-stars Church and Madsen and director Payne.

Leaves Hulu at the end of July. Add to My Stuff on Hulu