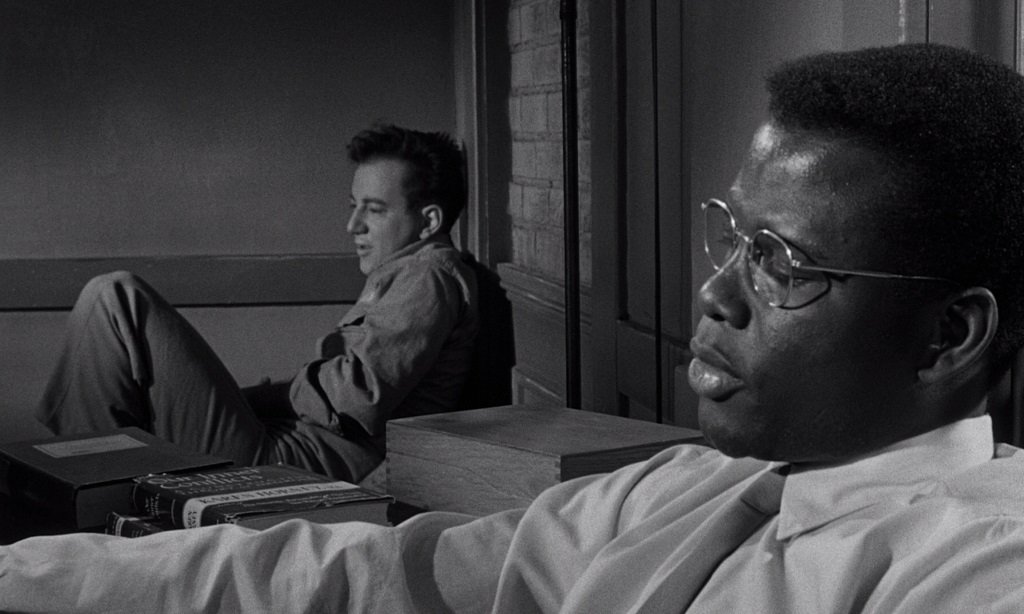 Pressure Point (1962) stars Sidney Poitier is a veteran psychiatrist who talks a frustrated younger colleague (played with animated gusto by Peter Falk) through a difficult patient by sharing a story from his past.

As a young psychiatrist working in a federal penitentiary in 1942, he’s assigned the case of an angry young white supremacist (played by Bobby Darin) convicted of sedition for his hate speech and pro-Hitler leanings. The young man (unnamed in the film) can’t sleep and is haunted by nightmares and he takes his anger out on Poitier with jibes and insults. With the encouragement of his boss, Poitier perseveres and helps the inmate through his problems. Well, some of them, anyway.

A genuine psychological drama, this is a film that takes place almost entirely in therapy sessions. It takes a Freudian approach to psychological trauma and filmmaker Hubert Cornfield takes a stylized approach to dramatizing Darin’s memories. These aren’t flashbacks so much as experiences etched into his mind and Cornfield uses an expressionist style with minimalist sets and theatrical lighting to emphasize the power they hold over him. It’s a little strained as a cinematic effect but the theatricality of those stark images holds its own visual power.

Sure, it’s heavy-handed and somewhat simplistic, especially viewed from our perspective, but racism and bigotry were hot button issues in the early 1960s and this film takes them on with seriousness and integrity. Poitier brings a strength and dignity to the role and Barry Gordon (the young star of A Thousand Clowns) plays Darin’s character in his memories. Cornfield tries to bring it to life with an interesting directorial approach.

On Blu-ray and DVD and on SVOD through Amazon Video, iTunes, Vudu, GooglePlay and/or other services. Availability may vary by service.
Pressure Point [Blu-ray]