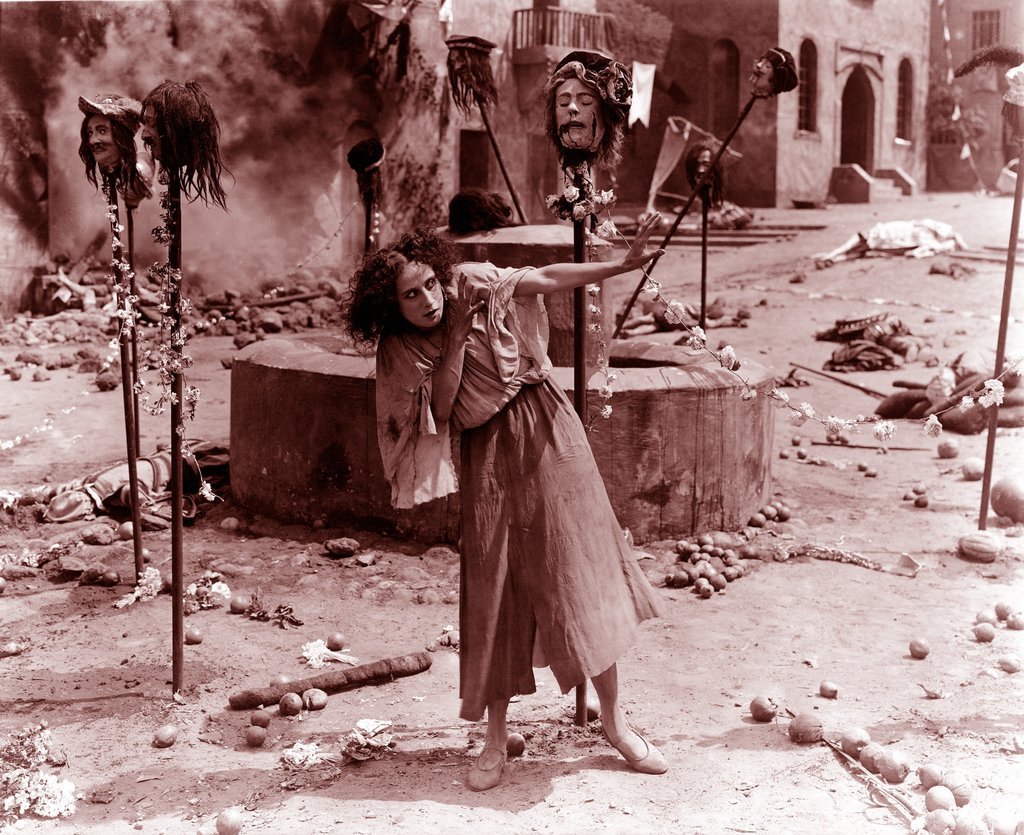 Lois Weber holds a place in film history as the first major woman film director in Hollywood. What’s often forgotten in that honor is the talent that gave her a successful 25 year making films for the major studios. She took on serious issues through her dramas, putting a face to the social problems she addressed, and brought nuance and complexity to her stories of struggle and hardship in modern American life in the 1910s. She brought a sophistication to movies in the era when movies grew up and though she shares screen credit with her husband, Phillips Smalley, film historians agree that Weber was the defining creative force. Weber has been overlooked in film histories in part because so many of her films have been lost and her surviving films have not been widely available. The Milestone Films release of the restoration of Shoes (1916) and The Dumb Girl of Portici (1916) should help restore her place as one of the most important and influential filmmakers—male or female—of her day.

Shoes (1916) is one of her best films, a social drama that humanizes the plight of poverty through the story of an underpaid shopgirl supporting her entire family on her wages and too poor to replace the ratty shoes that are literally falling apart on her feet. The plot is simple when reduced to its essentials—she gives into the advances of a cad in exchange for a new pair of shoes—but the meticulous presentation of her life and the nuanced performance of actress Mary MacLaren give the film a tremendous power, and Weber frames the shoes as vivid metaphors for the poverty of working class women.

Milestone presents the recent restoration from Netherland’s EYE Filmmuseum on Blu-ray and DVD. It is reconstructed from incomplete archival nitrate prints with some footage sourced from the 1932 comedy spoof The Unshod Maiden. There is visible nitrate decay in throughout the film and a couple of scenes show extreme chemical damage, all but blotting out the image. These moments are brief and the luminous nitrate image shines through most of the decay and print damage.

Presented with a lovely musical score by Donald Sosin (piano) and Mimi Rabson (violin) plus commentary by film historian and Weber expert Shelley Stamp, an archival audio interview with actress Mary MacLaren (recorded in 1971 by silent film historian Richard Kozarski), and the archival oddity The Unshod Maiden, a 1932 lampoon that condenses the film to 10 minutes and ridicules the 1916 film conventions with a rollicking comic score and wisecracking narration. I’m sure the producers didn’t even take context into account and simply thought it was funny to laugh at all those “naïve” silent movie conventions but I found the flippant attitude the project takes to themes of poverty and sexual degradation to be downright offensive. At best, it is disrespectful and ignorant, and thankfully the practice did not continue as planned. There’s a 7-minute interview featurette with Kozarski that provides background on Unshod and two straightforward but illuminating featurettes on the restoration of the film.
Shoes [Blu-ray]

The first blockbuster helmed by a woman director in Hollywood, The Dumb Girl of Portici (1916), based on the opera by Daniel Auber, presents the legendary ballerina Anna Pavlova in her only feature film performance. It was not uncommon to cast luminaries of stage, opera, and other performing arts in movies as they evolved from sideshow distractions and simplistic pageants to feature films tackling complex stories and weighty themes, for publicity value if nothing else. Pavlova proved to be natural onscreen in the role of the innocent, mute peasant girl in an Italian fishing village in 17th century Naples, when the country was occupied by Spain and taxed by a corrupt aristocracy into a state of starvation and poverty. Pavlova moves with a grace and impulsive energy that sets her apart from all the silent movie veterans in the cast, who deliver conventional performances. They wear their character like a costume with familiar theatrical movements and emotional expressions.. The personality of Pavlova’s peasant girl Fenella radiates from within and powers her character. Future filmmaker Rupert Julian (who directed Lon Chaney in the original Phantom of the Opera) plays her brother, a fisherman who leads the peasant revolt against the oppressive rule, but it is Pavlova’s spark that sets off the rebellion.

Weber’s strengths, or at least her interests, were in serious drama with a social message that she brought home by humanizing the issues in intimate scenes. In Portici she delivers an epic production with vast sets, lavish portraits of aristocratic decadence, and fiery mobs roused into revolt, yet still keeps the story centered on Pavlova’s innocent free spirit under threat from the lust and greed of the rich who treat the poor like playthings. Her evocative imagery and the mix of intimate moments within the visual spectacle is an interesting contrast to the historical epics of D.W. Griffith and the reveals a talent that has been too long overlooked in the histories of American cinema.

Long unavailable in any form, this silent movie landmark makes its home video debut on a 2-disc edition on DVD and Blu-ray in a new restoration from Milestone Films. As is the case with the overwhelming majority of silent films, there are no known original materials in existence so the restoration was reconstructed by Library of Congress from a 35mm nitrate reissue print at the British Film Institute and a 16mm print at the New York Public Library’s Performing Arts Library.

It is presented with tints and a dynamic musical score composed by John Sweeney and performed by a quartet that he anchors on piano. The second disc features the 52-minute ballet documentary The Immortal Swan (1935), an historical curiosity that pays tribute to Anna Pavlova with a little archival footage surrounded by ballet performances and personal remembrances, and archival newsreel and home movie footage featuring Pavlova.
The Dumb Girl of Portici [Blu-ray]

The Dumb Girl of Portici [DVD]

The original western epic, The Covered Wagon (1923) is a wagon train drama about a caravan that sets off from Westport Landing (soon to become Kansas City) to Oregon in 1948. J. Warren Kerrigan is our hero, the handsome and experienced Will Banion, who joins the massive Wingate wagon train and falls for the expedition leader’s daughter, Molly (Lois Wilson). There’s a romantic triangle—she’s engaged to Sam Woodhull (Alan Hale), who immediately senses the competition and has him ejected from the wagon train—that plays out in the episodic odyssey across the unsettled west. The settlers endure a dangerous river crossing, an Indian attack, near-starvation, a buffalo hunt, a funeral, a birth, and the temptation of the California Gold Rush along the journey. The film also calls out to real-life historical figure: a message carved in a bison skull from Brigham Young, a reference to a lawyer named Abraham Lincoln, and appearances by frontier trader Jim Bridger and scout Kit Carson.

Shot in location in Utah, it is a grandly mounted production featuring scores of authentic wagons and hundreds of horses stretching out into the distance and it strove for an accurate portrayal of life on the trail. Director James Cruze and cinematographer Karl Brown, the pioneering cameraman who photographed some D.W. Griffith’s greatest films, give the story an epic visual scope. The two romantic leads are not well known but fans of silent cinema and classic movies will recognize characters actors Alan Hale (Little John in both the 1922 and 1938 versions of Robin Hood) and Ernest Torrence (Keaton’s father in Steamboat Bill Jr.), who play’s Will loyal friend and protector. It was one of the biggest hits of 1923 and the top grossing western of the decade and it paved the way for John Ford’s even more ambitious and sophisticated frontier epic The Iron Horse the next year.

It makes its DVD and Blu-ray debut in a new HD master of the preserved print. It has scuffs and scratches but little chemical damage and the Blu-ray shows off the clarity of the image beneath the surface scuffs. Presented with an archival score by Gaylord Carter playing the Mighty Wurlitzer pipe organ, giving it a nostalgic quality, and it features commentary by film historian Toby Roan and the 1932 short spoof “The Pie-Covered Wagon” with pre-fame Shirley Temple and a cast of little kids playing adult roles, plus a booklet with an essay by Matt Hauske.
The Covered Wagon [Blu-ray]

Disc provided by Milestone and Kino Lorber for review purposes.