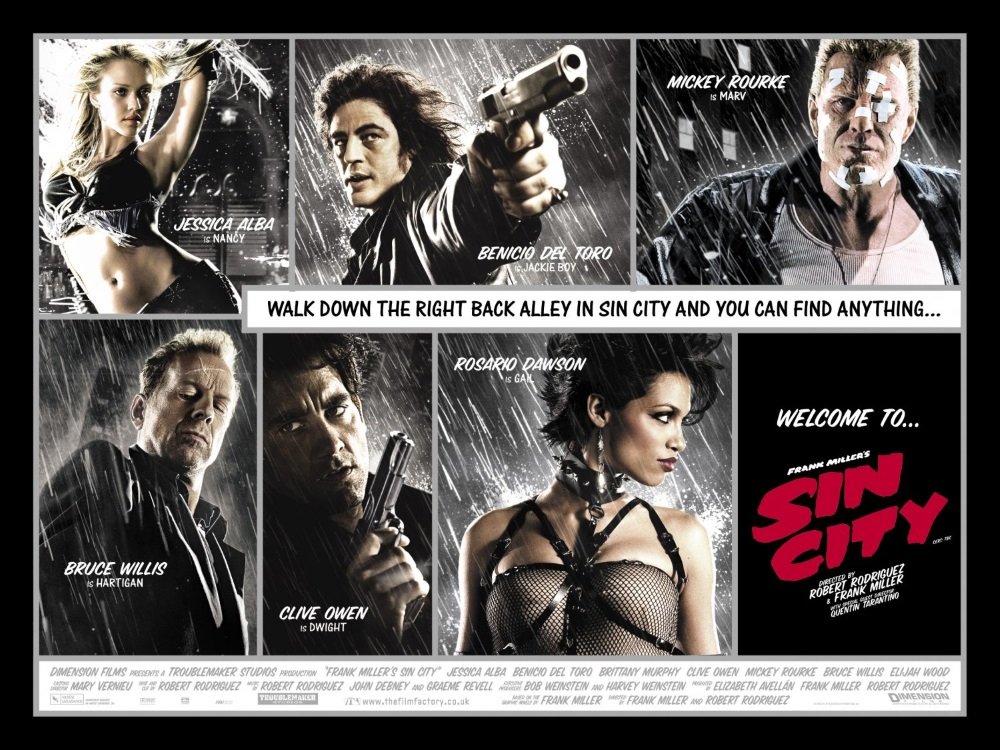 In Sin City (2005), Robert Rodriguez pulls out all stylistic stops to translate the most graphic of graphic novels—Frank Miller’s Sin City tales, all hard-boiled tributes to pulp fiction and film noir—from two-dimensional pages to free-floating big screen action, and he drafted Miller to help master not just the look, but whole hard-boiled extremism. Men are muscle and duty (be it honorable or vile), women are sex, and the world is a cesspool of power and corruption.

Sin City is made up of three of his novels in a cross-pollinating trilogy of tales that share space, time, and a few characters, but are otherwise distinctive, separate stories of three dark knights. Bruce Willis is a soon-to-retire cop who sacrifices his future to stop a sadistic child murderer (Nick Stahl), Mickey Rourke (behind a face of raw meat and scar tissue) is a simple but loyal borderline sociopath on a mission to avenge the murder of an “angel” (Jaime King) who sought protection in his arms, and Clive Owen a knight in black leather whose underworld chivalry lands him between the cops, the mob, and the scrappy gang of leggy hellion hookers (led by Rosario Dawson).

Sin City has all of Rodriguez’s strengths and weakness, pushed to a crazy extreme by the very nature of his noir redux ad absurdium. It becomes a pastiche of the most naively macho extremes of brutal pulp fiction so lovingly rendered as mock anti-hero B-movie crime opera. Neither sincere in its cynicism nor satiric in its exaggerations, it has all the emotional and thematic depth of its flattened graphic images. Maybe this is exactly the film Rodriguez meant to make: hardboiled fiction on steroids, scotch, and bloodlust, stunning to watch but two-dimensional in every aspect.

Add to My List on HBO Max, which also has the unrated version of the film