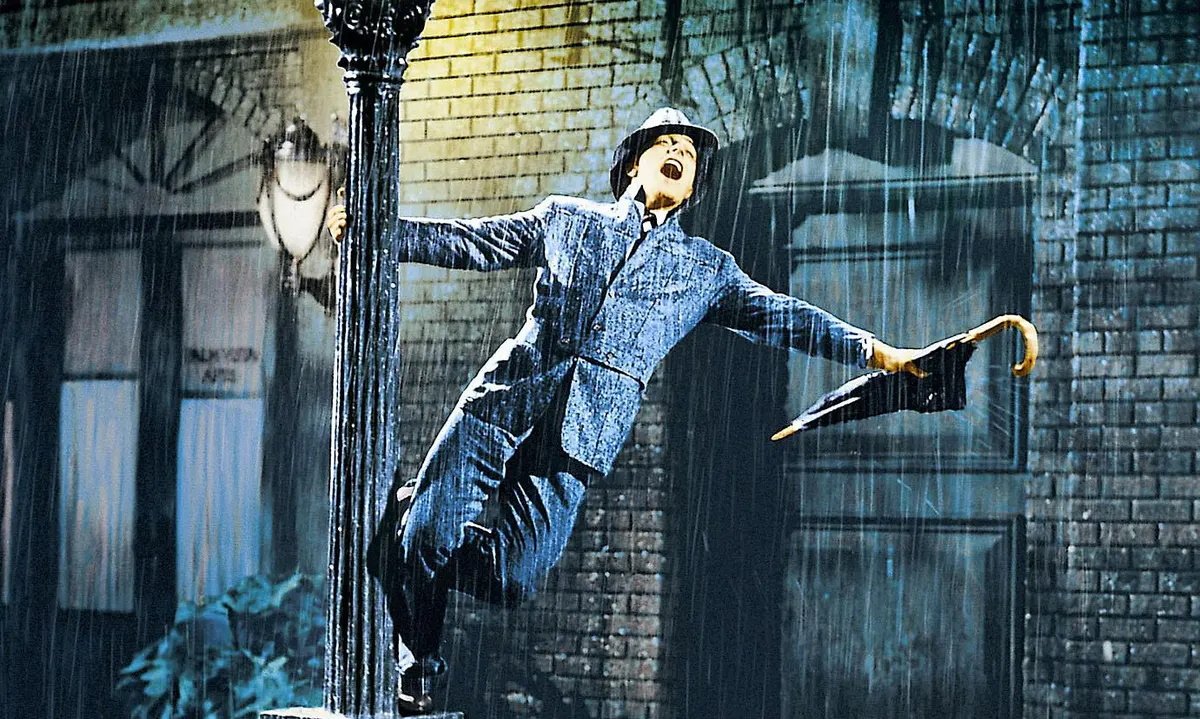 Singin’ in the Rain (1952) has been hailed as the greatest American musical ever made. It’s certainly one of the most fun, a knockabout reimagining of the transition from silent to sound movies: lousy history but a blast of singing, dancing, romance, energy and color.

Gene Kelly is Don Lockwood, the vaudeville schlub turned movie stuntman and finally matinee idol. His introduction is brilliant, greeting crowds as a flashy movie premiere with a practiced smile and a smooth patter. The film goofs on his rise to stardom twice, first in a glib radio address with flashback gag punchlines, then again in a glorious set piece that reworks the story as a dance/ballet.

Lockwood is half of a romantic movie team in the golden days of the silent movie era and Jean Hagen is his glamorous screen partner Lina Lamont, magic onscreen as long as she’s silent. Off-screen she’s dim, brassy, and catty with a nasal Brooklyn screech. And she’s none too happy when Don falls in love with girl-next-door Kathy Selden (Debbie Reynolds), a movie extra who pops out of a cake and into his life.

Ostensibly this is a Hollywood story about the chaos in the transition from the silent screen to sound cinema. And while classic cinema has never been particularly reliable for historical accuracy, this is just as much a movie fantasy as any MGM musical. After the film lampoons the chaos of the studios making their first sound features with the new (and very limited) sound recording technology, our heroes effortlessly overcoming every technical obstacle the moment they decide to turn their silent swashbuckler into a romantic musical and just put on a show. Once you toss all expectations of anything resembling actual history out the window, it’s an irresistible story of nothing less than the birth of talkies and the Hollywood musical.

This was Stanley Donen’s second collaboration with co-director/star Gene Kelly and they bring a sense of joy and energy to the glorious Technicolor spectacle. The original screenplay by Betty Comden and Adolph Green is poor film history but great fun, witty and self-effacing while celebrating the magic of movies. The iconic songs—”Good Morning,” “Make ’Em Laugh,” “You Are My Lucky Star,” and of course the legendary title number, all by Nacio Herb Brown and Arthur Freed—were all repurposed from MGM movies of the early sound era with the blessing of movie music super-producer Freed, the man who made MGM king of the Hollywood musicals in the 1940s and 1950s.

Millard Mitchell costars as studio boss R.F. Simpson, Cyd Charisse shines in as Kelly’s seductive partner in the dream ballet, and Rita Moreno in a small role as Lina’s friend Zelda. You might recognize Kathleen Freeman, a frequent foil for Jerry Lewis, as Lina’s voice coach.

It was nominated for Academy Awards for supporting actress Jean Hagen and Lennie Hayton’s original score and was added to the National Film Registry in 1989.

It placed in the number 10 spot in the 2022 Sight & Sound Greatest Films of All Time poll.

The Blu-ray and DVD special edition releases feature commentary featuring director Stanley Donen, actors Debbie Reynolds, Donald O’Connor, Cyd Charisse, and Kathleen Freeman, screenwriters Betty Comden and Adolph Green, Baz Luhrmann (the director of Moulin Rouge), and film historian Rudy Behlmer, edited together as a kind of audio documentary in its own right running along with the film, plus the feature length documentary “Musicals Great Musicals: The Arthur Freed Unit at MGM” (originally made for the public television showcase “American Masters”), the “making of” documentary featurette “What a Glorious Feeling” hosted by Debbie Reynolds, excerpts of the original MGM musicals movies from which Arthur Freed/Nacio Herb Brown songs originated, outtakes from the musical number “You Are My Lucky Star,” scoring stage sessions, and a stills gallery.

The Blu-ray edition is remastered from a 4k scan of the Technicolor 3-strip negatives and also includes the exclusive documentary “Singin’ in the Rain: Raining on a New Generation.”