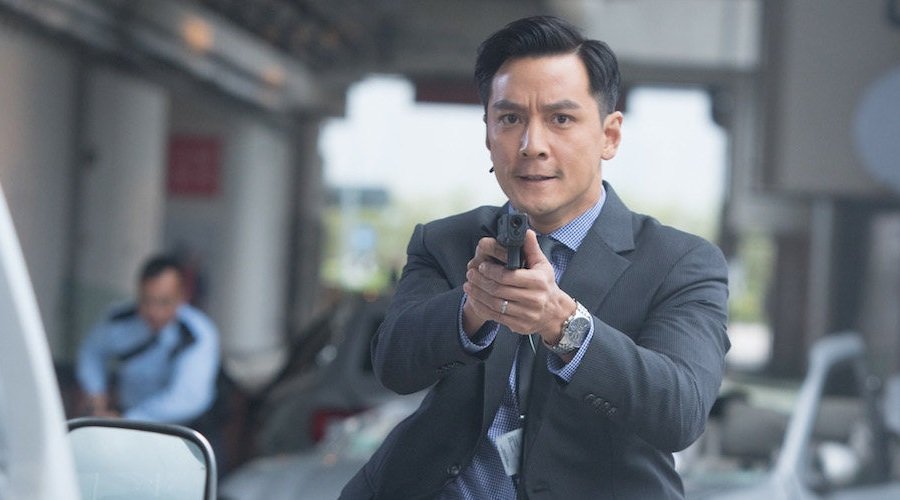 Ringo Lam made his name as Hong Kong cinema’s grittier, leaner alternative to John Woo’s flamboyant action films with Prison on Fire (1987) and City on Fire (1987), the latter most famous as one of the primary inspirations of Quentin Tarantino’s Reservoir Dogs (the heist, the undercover cop, and the image of the multi-gun stand-off came right out of Lam’s film). The title of his new action film Sky on Fire (China, 2016) would seem to suggest a return to that style of action but this is bigger, more lavish, a mix of action movie and conspiracy thriller with CGI expanding his scope, and not always to the benefit of his strengths.

The conspiracy has to do with a life-saving medical breakthrough called “Ex-Stem Cells,” which were developed by a scientist who was killed in a laboratory fire and appropriated by a mogul who owns the massive Sky One skyscraper. The samples are stolen in an elaborate heist and the head of Sky security Tinbo (Daniel Wu) is pressured to do everything it takes to get them back. Stirred into the mix is the family of the dead scientist, who is convinced that Sky murdered the creator, and a hot-headed truck driver whose sister is in the late stages of inoperable cancer. The Ex-Stem Cells (their properties are left purposely vague) are her only hope but the Sky mogul is intent on turning the breakthrough into a billion dollar industry.

If that sounds simplistic, well sure it is. Hong Kong action movies have a tendency to polarizing good and bad and even after reunification it’s remained a part of the DNA of popular genre cinema. This one has the big issues represented in microcosm by the truck driver Jia, whose sister Jane has cancer and is beyond conventional treatment. He is angry and belligerent and not really helping his case, but in his bullheaded determination to help his sister he ends up in the middle of the corporate war. While Jia is driven by devotion family, Tinbo is torn between duty and morality. No points for guessing which side he lands on.

Lam wrote the film himself and clearly was not as concerned with logic as he was with opportunities for action and conflict and big set pieces. It takes a while but the film delivers on the promise of the title; there is a sky on fire and it is epic and so over-the-top it beggars imagination. It’s far from Lam’s best movie and it is slathered in cut-rate CGI that isn’t quite up to the task, but then realism is hardly the yardstick for this piece of pop action cinema. If you can roll with the melodrama driving the characters, you’ll enjoy the rest of the spectacle even if you wince at its simplicity. But I still prefer the leaner, meaner Lam.

, iTunes, GooglePlay and/or other services. Availability may vary by service.
Sky on Fire [Blu-ray]

The DVD and Blu-ray editions from Well Go have no supplements.