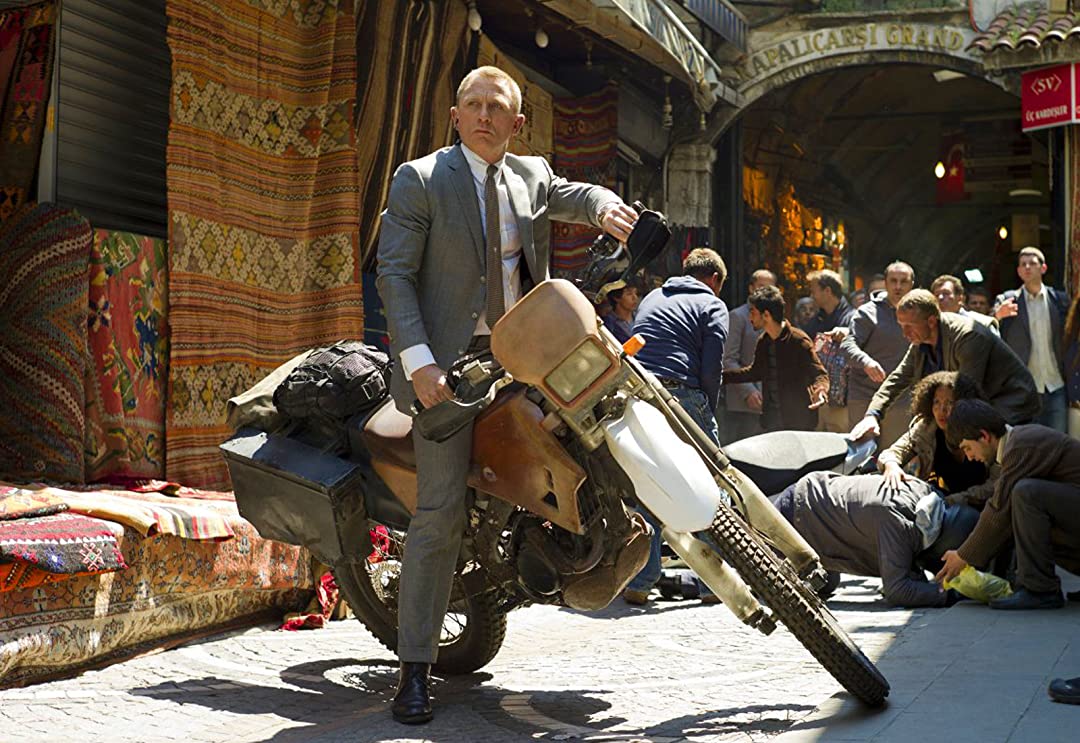 Skyfall (2012), the 23rd official James Bond movie, attempts to make 007 more man than number as it works through some of Bond’s issues (James Bond has issues?) while he grudgingly returns to her majesty’s secret service when a conspiracy targets M and MI-6. It takes itself awfully seriously while doing some pretty crazy things and I don’t find the Bond mythos necessarily enriched by backstory.

But Daniel Craig is a tough, roughed-up Bond with as much working class sand as high society style, a little too cold-blooded this time out (even Connery showed a little pang of responsibility when one of this lovers died on the course of an assignment), and stripping the film of gadgets for the bare-knuckle and booby-trap finale works very nicely. And don’t forget a great Bond theme song by Adele, a flashback to the great sixties bluesy-brassy themes, and credits sequence, a necessary ritual in every cinematic offering.

Javier Bardem is not the most flamboyant villain in the 007 canon but not for lack of effort, and the enjoyment he has playing the part is infectious. And Dame Judi Dench gets her hands dirty as M this time around. Sam Mendes is up to the task of executing the action scenes while upping the actorly intensity. But Bond aside, the star of this film is cinematographer Roger Deakins, at least in the stand-out fight set against the building-sized neon of Tokyo. It’s one of the most beautiful, startling, mesmerizing, purely cinematic action scenes in any Bond, a piece of action ballet that verges on abstract art in motion with bare-knuckle brushes.

It’s been praised as the best Bond ever by a lot of critics. I’m not part of that chorus, but I understand the praise. It’s a terrific Bond by any measure, smart and sinewy, filled with memorable action and inventive set pieces, and a significant improvement over the previous film.

It won Academy Awards for the theme song and for sound editing, the BAFTA awards (the British equivalent of the Oscar) for Best British Picture and Best Score (the first Bond to win a BAFTA since From Russia With Love), and the American Society of Cinematographer’s award for Outstanding Cinematography for Roger Deakins.

The DVD supplements are limited to four brief featurettes: “The Title Sequence,” “DB5,” “Women,” and “Locations.” The Blu-ray is far more tricked out: two commentary tracks (one by director Sam Mendes, the other by producers Michael G. Wilson and Barbara Broccoli and production designer Dennis Gassner), footage from the “Skyfall” premiere, “Shooting Bond,” an hour-long collection of production featurettes (the four on the DVD plus ten more, on the characters, action scenes, and more) that can be viewed as a single documentary or individual pieces. The Blu-ray also features a bonus DVD and a digital copy of the film for portable media players.