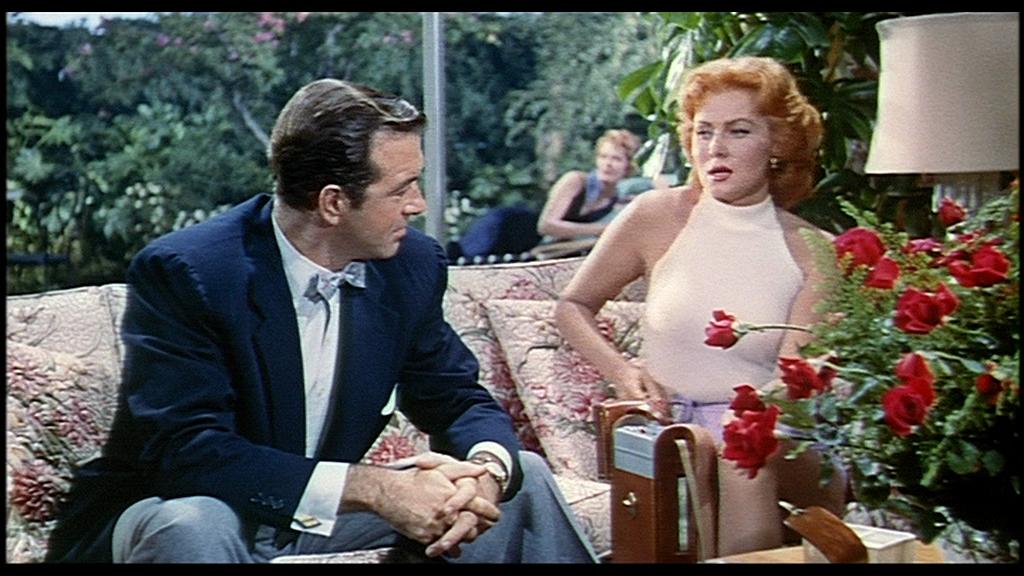 Slightly Scarlet (1956) isn’t well known to even many film buffs but it’s an interesting film noir in lurid Technicolor (call it a film rouge) from veteran director Allan Dwan, who began making films in the early 1910s and directed everything from Douglas Fairbanks action epics to Shirley Temple dramas to comedies to westerns in a career that spanned fifty years.

Based on a novel by James M. Cain, this shadowy color crime film stars the lunky John Payne (doing his heavy-lidded, slow simmer bad guy number) as an ambitious underworld underling who turns on his gangleader boss (Ted de Corsia) to worm his way into the graces of a law and order gubernatoral candidate (Kent Taylor). As Payne romances the candidate’s beautiful secretary (Rhonda Fleming), whose flaming red head hair just about sets fire to the Technicolor, Arlene Dahl sasses her way between them as Fleming’s shameless kleptomaniac sister, sinking her claws into bad boy Payne.

Produced by veteran independent producer Benedict Bogeaus, it’s not quite a B-movie but certainly on the low-budget side. Dwan was a pro with plenty of experience in the trenches and it shows: he slowly turns the day-bright color darker and darker until night all but swallows corrupt player Payne as his betrayals come back to haunt him. Dwan, helped by legendary noir cinematographer John Alton, makes it look effortless.

Slightly Scarlet is in need of a restoration or at least true preservation. The only versions currently available on disc and streaming services are from the pre-HD era, perfectly decent but without the clarity and definition it deserves. Given that, it is still worth a look.