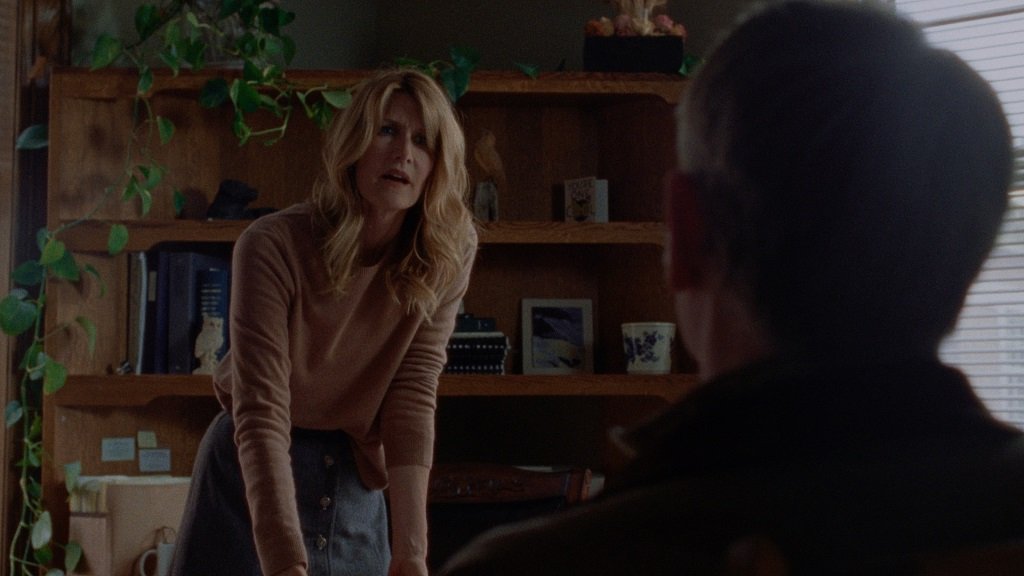 Laura Dern, Michelle Williams, Kristen Stewart, and Lily Gladstone are Certain Women (2016, R) in Kelly Reichardt’s intimate, compassionate portrait of frustrations, isolation, and small victories in three stories of small-town lives in the American Midwest. It’s Reichardt’s first film shot outside of Oregon in over a decade and she creates just as powerful a connection with the Montana landscape as she did with Oregon’s. All of her featured actresses are superb but Lily Gladstone is the revelation here, an unknown whose quietly powerful portrait of a woman in love is tender and devastating. Based on the short stories of Maile Meloy. Streaming on Netflix.

Joseph Gordon-Levitt is disillusioned idealist Edward Snowden in Snowden (2016, R), Oliver Stone’s drama about the NSA whistleblower who leaked thousands of classified documents revealing illegal government surveillance. Framed by the famous meeting in a Hong Kong hotel room where Snowden (played with modest integrity by Joseph Gordon-Levitt) shared top-secret files revealing illegal surveillance programs with journalist Glenn Greenwald (Zachary Quinto) and documentarian Laura Poitras (Melissa Leo), it tells the story of a patriot from a conservative background who decides to serve his country working for American intelligence after an injury in basic training ends his career as an enlisted soldier, and then becomes disillusioned by the abuse of power under cover of the Patriot Act. Now streaming on Amazon Prime Video. Reviewed on Stream On Demand.

A Quiet Place (2018, PG-13) is a horror film with a high-concept premise (alien invaders hunt humans by sound) but behind the jumps and monster-movie spectacle is a drama rooted in guilt and love and the drive to protect family at all costs. On VOD and Cable On Demand, also on DVD and at Redbox.

Lean on Pete (2018, R), shot in Oregon by British filmmaker Andrew Haigh (“45 Years”) and starring Charlie Plummer as a teenager who bonds with the horse he tends, challenges the sentimentality of the “boy and his horse” genre with an emotionally authentic story. It debuts on VOD and disc but Amazon Prime Video subscribers can stream it for free right now.

Jason Clarke is Ted Kennedy in Chappaquiddick (2018, PG-13), which dramatizes the real-life car accident that killed a young woman (Kate Mara) and the scandal that ensued. Also new:

Available same day as select theaters nationwide is Shock and Awe (2018, R), directed by Rob Reiner and starring Woody Harrelson and James Marsden as reporters digging into the lies behind the 2003 Iraq war. Also new:

Ben Affleck made his directorial debut with the modern private eye drama Gone Baby Gone (2007, R), based on the novel by Dennis Lehane and starring his brother, future Oscar-winner Casey Affleck, with Michelle Monaghan, Morgan Freeman, Ed Harris, and Amy Ryan in an Oscar-nominated performance. Reviewed on Stream On Demand here.

Theo James and Forest Whitaker star in the made-for-Netflix apocalyptic thriller How It Ends (2018, TV-MA).

Steven Spielberg’s Jaws (1975, PG) is the original summer blockbuster. It’s on Prime Video along with the increasingly ridiculous sequels. Reviewed on Stream On Demand here.

NYPD Blue: The Complete Series (1993-2005) presents all 12 seasons and 261 episodes of the great modern cop drama that, in retrospect, was always about the redemption of Andy Sipowicz (Dennis Franz).

True stories: Take Me to the River (2014, PG) chronicles the recording of an album uniting classic R&B and blues artists (among them Bobby Blue Bland, Mavis Staples, and Booker T. Williams) with the new generation of rappers.

Lake Bell directs and stars as a voice artist in a male-dominated business in the entertainment industry comedy In a World… (2013, R).

Amy Adams is a reporter confronting the psychological scars of her past while covering a murder in the HBO Original miniseries Sharp Objects, based on the Gillian Flynn novel and directed by Emmy-winner Jean-Marc Vallée.

Justice League (2017, PG-13) stars Ben Affleck and Gal Gadot as Batman and Wonder Woman, the veteran heroes who join forces with The Flash, Aquaman, and Cyborg to save the world after the death of Superman.

TCM Select Pick of the Week is Auntie Mame (1958) starring Rosalind Russell as an eccentric heiress who raises her orphaned nephew in a free-spirited, bohemian lifestyle. Streams through December 27, 2018

“Star of the Week: John Wayne” collects 19 films featuring The Duke, from his breakthrough role in Stagecoach (1939) to seventies cop drama McQ (1974), shot in Seattle. In between are a number of collaborations with John Ford (including The Long Voyage Home, 1940, and biographical drama The Wings of Eagles, 1957, with buddy Ward Bond playing John Ford), Howard Hawks western Rio Bravo (1959) with Dean Martin and Angie Dickinson, and cattle drive drama The Cowboys (1972, PG) with Roscoe Lee Brown and Bruce Dern.

Also new: “Cinematography by Caleb Deschanel” celebrates the work of the great director of photography with four films, including the gorgeous The Black Stallion (1979, R) and Oscar-nominated The Right Stuff (1983, PG), and “Director of the Week: Jean Rouch” spotlights nine films from the nonfiction filmmaker, including his acclaimed Chronicle of a Summer (France, 1961, with subtitles).

A collection of BAFTA-winning British television dramas make their respective American debuts. Murdered by My Boyfriend (2014), Murdered by My Father (2016), and Murdered for Being Different (2017) form a loose trilogy of heart wrenching dramas based on true stories. In a similar vein and also inspired by a true story is Killed by My Debt (2018), also making its U.S. debut.

Also new: Doctor Blake Mysteries: Seasons 4 & 5, the final seasons in the Australian crime drama set in the 1950s and starring Craig McLachlan as a crime-solving surgeon.