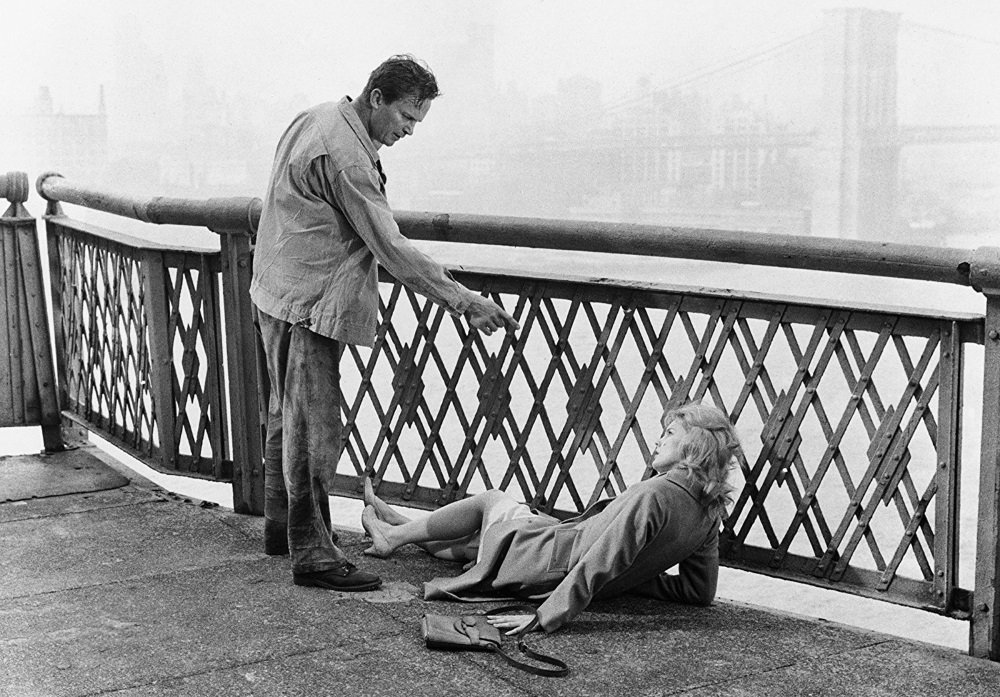 Not to be confused with the Jonathan Demme screwball comedy/thriller by the same name, the 1962 Something Wild is an unusually frank and sensitive drama about a teenage girl recovering from rape.

The film opens on the assault, a non-explicit scene that communicates both the violence of the rape and the terrible sense of violation and helplessness felt by Mary Ann (Carroll Baker), a New York middle-class girl who is attacked on the way home from school. Director Jack Garfein, who adapted the screenplay from the novel “Mary Ann” with author Alex Karmel, presents the ordeal in impressionistic fragments and discomforting close-ups, and the aftermath, as she picks herself off and shuffles home, in a long, wordless scene sensitive to the nuances of her experience. The tactile presentation of the physical details (a skirt shoved up over her thigh, a sharp rock poking into her leg, bending to pick up the modest crucifix ripped from her neck and tossed to the ground) doesn’t just channel the sensory experience, it suggests the fragments of the ordeal that Mary Ann’s mind latches on amidst the horror of violation. More than fifty years later it is still startling and affecting, a simple yet evocative cinematic suggestion of ordeal too terrible to show.

Mary Ann sneaks into her house quietly, wraps herself in a blanket and huddles on the floor, and then tries to scrub the feeling from her skin. She tells now one about the assault, not her nattering, blithely racist mother (Mildred Dunnock), not her distant stepfather, and as she becomes more alienated from her familiar world she drops her schoolbooks on a bench and runs off into the city. She rents a seedy room, barely bigger than a closet and overstuffed with junky furnishings, and gets a job working the counter of a five-and-dime but continues to wall herself off from all human contact. She panics in crowds and shrinks from any physical touch. Her co-workers think she’s stuck up (Doris Roberts leads the hazing).

Ralph Meeker appears almost an hour into the film as Mike, a gruff but lonely mechanic who stops Mary Ann from killing herself. Shifting from tough guy exclamations and protective instincts, he walks her through the city and invites her to rest in his spartan basement apartment while he works. She registers the click of the lock in the door behind him but doesn’t react, and he is all nervous host as he prepares dinner and shares his scrapbook, but he refuses to let her leave. We lose track of the days. You might expect the film to turn into a captive thriller and for a moment—when Mike arrives home blind drunk and starts grabbing at her—it seems to be so, but the scene takes a startling turn and so does the film. He’s more like a blue collar Lenny (a la Of Mice and Men) than a psychotic loner and the film becomes a character drama about two damaged people unable to articulate or communicate their feelings to others, which puts the focus on the physical performance: gestures, expressions, body language, the unexpected reaction to situations.

Jack Garfein is a veteran of the Actor’s Studio, a theater director making his second (and, as it turned out, final) feature film, and he draws superb and unexpected performances from his stars. Baker is sunny blond innocence as New York schoolgirl Mary Ann Robinson whose light goes out with the assault, a middle class girl who plunges herself into the anonymous crowds of the city. When she rebuffs the pleasantries and invitations of co-workers and neighbors (Jean Stapleton is memorable as the boozy hooker next door who lounges her days away in lingerie and curlers), it’s not in revulsion or fear, she simply shuts off and turns away. Meeker is slow and stolid as a working class guy who would be the villain in any other film, a jailer who doesn’t prey on his captive and surely imagines that he’s somehow protecting her. When Mike confesses “You’re my last chance” with a naked desperation (Meeker is superb), Garfein’s compassion opens up to embrace him as well.

Garfein made the film outside the studio system yet he gathered an all-star team of collaborators. Cinematographer Eugen Shüfftan, who created the visual effects of Fritz Lang’s silent masterpieces and won an Oscar for The Hustler (which came out the same year as Something Wild), shoots New York with both an understanding intimacy and the eyes of an outsider seeing the busy anonymity and the crushed poverty. Aaron Copland’s score is rich and tender and appropriately sparse, and the opening credits by Saul Bass set the tone of alienated dislocation in the crowds. Along with the central performances by Baker and Meeker, they help communicate Mary Anne’s angst and disconnection and Mike’s lost man in the city. The ambiguity of the film is troubling to be sure—maybe he is protecting her in his way—and is that ending supposed to be triumphant or a kind of resignation? It’s both frustrating and impressive and Garfein himself finds some hope in it. Or is it just a resignation?

, iTunes, GooglePlay, Vudu, and/or other services. Availability may vary by service.
Something Wild (The Criterion Collection) [Blu-ray]

Something Wild (The Criterion Collection) [DVD]

Criterion’s Blu-ray and DVD release features a new interview with Jack Garfein conducted by critic Kim Morgan, who has championed the film for years. The conversation encompasses Garfein’s life (he’s a Holocaust survivor who arrived in America alone as a teenager) and career before and after Something Wild and as well as delving into the film. There are also new interviews with star Carroll Baker and with film historian Foster Hirsch on the Actors Studio, and excerpts from “Master Class with Jack Garfein,” a 2014 lecture on acting technique from the director. The fold-out insert features an essay by Sheila O’Malley.