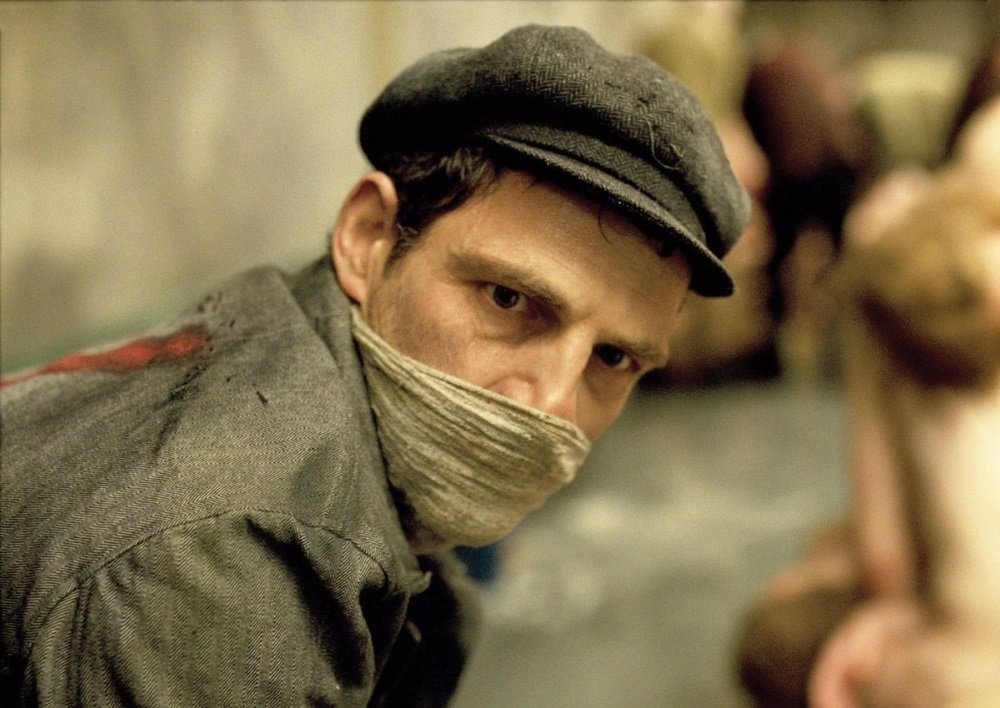 Son of Saul drops the viewer into the horror of the Holocaust with its first images. Saul (Géza Röhrig) is a Sonderkommando, chosen from the prisoners of a concentration camp to work in the gas chambers, and we are plunged into his crushing routine: moving the prisoners through the dressing rooms, sifting and sorting the belongings after they are locked in the gas chamber, then dragging the bodies out and clearing way for the next group. Serving as a Sonderkommando didn’t save the men from death, it only postponed it, and Saul knows he hasn’t long.

But Son of Saul doesn’t linger on the horror. Rather Hungarian filmmaker László Nemes shoots it entirely in close-up, with a handheld camera uncomfortably close and constantly in motion as it follows Saul through the grind of his routine. We remain locked on Saul throughout the film. Nemes shoots in a squarish format, similar to the pre-widescreen era of movies, with a short lens that keeps only Saul’s face and his immediate orbit in focus. Everything else is blurred and indistinct if not completely out of frame, suggested more than seen. It’s not just to keep us from seeing it clearly, but it suggests his own state of mind: detached out necessity, numb and exhausted, going through the motions of living, focused only on the activity.

When Saul sees a young boy—perhaps his son, perhaps a boy the same age—who somehow survived the gas chamber. Barely alive, he is smothered by a doctor. Saul’s detachment is broken. It’s the first stranger he has let into his consciousness, that he even really sees, and it becomes his entire world. He is driven to give this boy a proper burial.

Röhrig is not an actor by training—he’s a poet, a filmmaker, and a theologian—and he carries an almost impenetrable expression throughout the film. We can’t know what’s going through his mind, we can only observe his actions, and this new quest changes his bearing. He now moves with purpose, his momentum focused on a goal that risks the success of a planned revolt within the camp. There’s no logic to it, but then reason has no place in such a nightmare.

Son of Saul is an overwhelming, numbing, confusing experience by design. The unmeasurable evil of the Holocaust is beyond explication so Nemes (with screenwriting partner Clara Royer and cinematographer Mátyás Erdély) tries to express a sense of uncertainty and disconnection, an existence where the horrors are a silent scream driven to the margins of consciousness out of pure will (the dense, layered soundtrack hints at what he can’t see) and time dissolves. It is a haunting and devastating attempt to confront an ordeal beyond our ability to truly comprehend.

It won the Academy Award for Foreign Language Feature, Grand Prize of the Jury at Cannes, and numerous critics’ awards for Best Foreign Film and Best First Feature.

, iTunes, and other VOD services.

Also on DVD and Blu-ray, with commentary by director László Nemes, cinematographer Mátyás Erdély, and actor Géza Röhrig. Exclusive to the Blu-ray is a Q&A at the Museum of Tolerance with Nemes, Erdély, and Röhrig, and an Ultraviolet Digital HD copy of the film.
Son of Saul [DVD]

Pingback: What to watch: 'Begin Again' on Netflix, 'Learning to Drive on Amazon Prime, and more - Stream On Demand
Comments are closed.