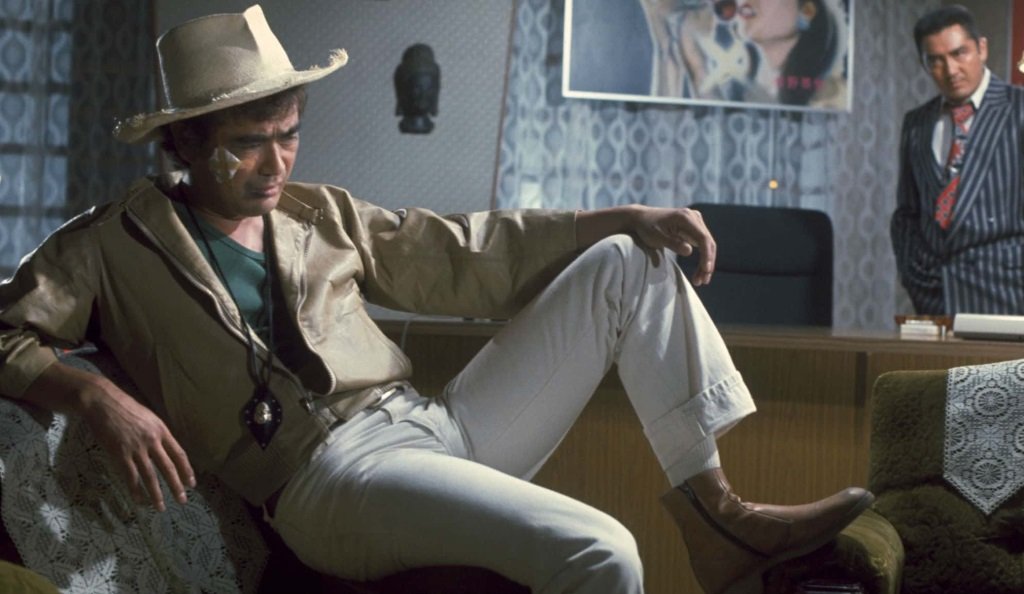 Martial arts movie icon Sonny Chiba plays the tough Okinawa cop who arrives in the neon lights of Tokyo in a straw hat and a pig in his arms in Doberman Cop (Japan, 1977), the crime thriller based on the popular manga and styled on violent American crime movies of the seventies. He looks like a hick and leans on superstitions and mysticism, and somehow he ends up bunking in a brothel, where the girls dote on his squealing piglet, but when he’s goes into action he’s a badass. I mean, he’s Sony Chiba. Of course he’s a badass.

The film opens on the investigation of an arson murder believed to be the work of a serial killer. Kano (Chiba) has comes from a remote, rural island village to see if the victim is a runaway he’s been looking for. The Tokyo police, backed by state-of-the-art forensics and high-tech analysis, insist she is but Kano has a hunch that Miki, a drug-addicted singer groomed by a former gangster to be a pop superstar, is actually his missing person.

Chiba plays his part for country bumpkin humor but pulls out all stops in a couple of martial arts fights (shot with a handheld camera that swoops and tilts with his movements) and a spectacular stunt scene where he rappels down a skyscraper and crashes through a window to rescue a hostage. The media immediately brand him the Tarzan Cop. The film also tosses show business conspiracy, drug addiction, musical numbers, ancient superstitions, modern forensics, car chases, gun battles, and a squealing pig charging through strip club in to the fast-paced crime drama directed by Japanese gangster movie veteran Kinji Fukasaku. It borders on incoherent and careens from goofy comedy to brutal violence to sleazy sex scenes and back throughout, but it is nothing if not entertaining.