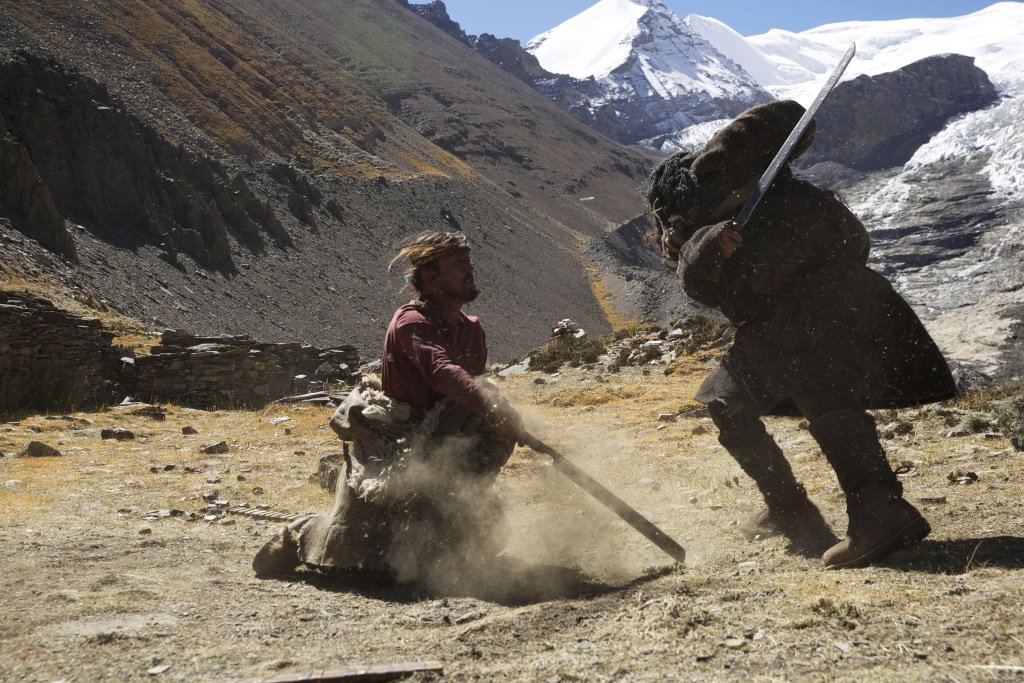 An enigmatic epic set on the vast, empty plains and in the treacherous mountains of Tibet, the meandering but visually enthralling Soul on a String (China, 2016) combines spiritual odyssey, revenge film, and redemption quest.

Reluctant hero Tabei (Kimba), a former convict who turned his back on society as a wandering hunter, is sent by a High Lama on a quest to return a sacred stone to its place of origin in the mountains of Tibet. He’s joined by a woman desperate to escape her lonely desert life and a mute child with psychic powers, and is pursued by vengeance-fueled brothers, thugs after the stone, and a writer who wants to put Tabei’s story to paper.

Chinese filmmaker Zhang Yang directs from a screenplay co-written with Tibetan-Chinese writer Tashi Dawa that addresses Buddhist themes within a familiar quest drama with warrior action and mystical twists. Along the way, the rogue Tabei transforms: “The sins in this life must be redeemed in this life.” It’s also a film about myths and storytelling, presented as a timeless story playing out in a land both ancient and modern, which may be true or a fiction constructed by the author on his own odyssey.

It is overlong at 140 minutes and dissipates between the various stories that wind through the quest but the cinematography is gorgeous, with widescreen images of characters in vast, open plains ringed by mountains and colors pushed to unreal intensities, and the allegorical stories take on mythic dimensions.

In Tibetan with English subtitles, not rated, features stylized violence and sexual situations.

, iTunes, GooglePlay and/or other services. Availability may vary by service.
Soul on a String [DVD]

The DVD from Film Movement features the bonus short The Rifle, the Jackal, the Wolf, and the Boy from Lebanon.