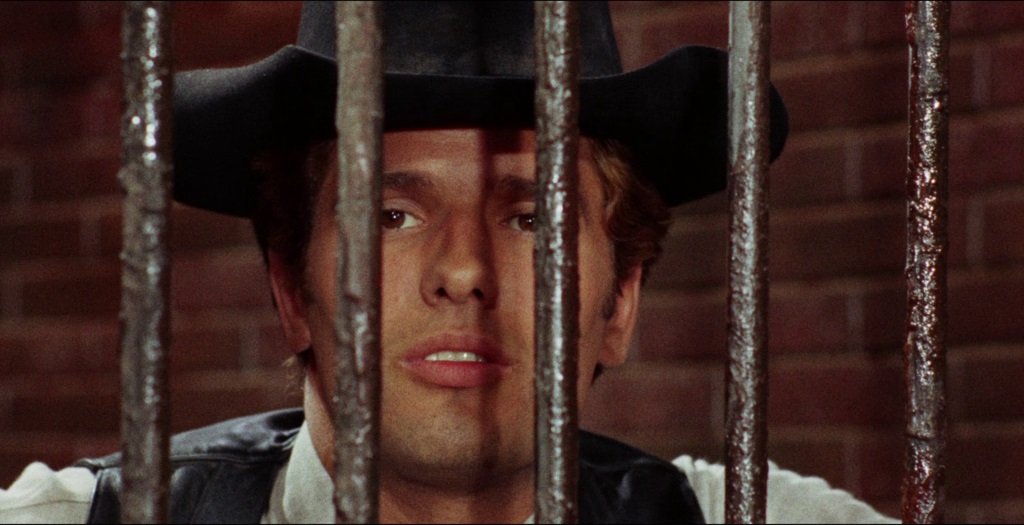 Duccio Tessari is not one of the directors known for spaghetti westerns. In fact, he only directed two in his long and successful career, both with Giuliano Gemma (billed as Montgomery Wood) playing against the mercenary expectations of the defining spaghetti western anti-hero. Both make their American home video debut as Blu-ray double feature.

In A Pistol for Ringo (Italy, 1965), Gemma is a wily gunfighter known to all as Angel Face who is released from jail to infiltrate a gang of Mexican bank robbers holding a rancher’s family hostage in their manor home, which they’ve guarded like fortress. Sancho (Fernando Sancho) plays the jolly bandit king who acts like he’d prefer to let everyone live and then has his men drop anyone who gets out of line, but he isn’t shy about executing his hostages as the stand-off drags on, and he targets the lowly Mexican laborers, hardly the actions of the Robin Hood he pretends to be.

Tessario was an uncredited writer on A Fistful of Dollars and the high body count, ruthless killers, double crosses and calculated ambushes seem to be informed, if not outright inspired, by Leone’s film. But while Ringo appears to be a classic heartless mercenary bidding up his services, he turns out to be more of a lovable rogue with a soft spot for women and kids and a loyalty to the good guys. Gemma is a likable lead, boyish (fitting for the name Angel Face), confident and a little cocky but also convincing when he recites his mantra “It’s a matter of principle,” and George Martin co-stars as the sheriff, who likes Ringo but doesn’t exactly trust him. It also stars Nieves Navarro (who went on to star in producer Luciano Ercoli’s Death Walks films and eventually marry Ercoli) as a cunning gang member who becomes protective of the hostages with the widower father takes a romantic interest and Lorella De Luca (credited as Hally Hammond) as the rancher’s daughter, who Ringo protects from the gangster’s lascivious second in command. Manuel Muñiz takes on the Walter Brennan role as the eccentric deputy whose faith in Ringo never flags.

You can see the limitations in the big fight scene, where fists swing visibly wide and the breakaway walls give way like snap-to pieces popped out of place. Okay, so the brawl is not quite up to even B-movie standards but there’s plenty of energy to it and Tessari has sends it sprawling all over the set. And Pistol makes clever use of a Christmas setting, spiking the atmosphere of the dusty southwestern setting with exchanges of “Merry Christmas,” and one tense moment is diffused by a Christmas carol that rouses even the most hardbitten bandit to join in.

The Return of Ringo (Italy, 1965), released the same year, reunites the cast but is a sequel in name only. Adapted from the final episodes of Homer’s “The Odyssey,” it stars Gemma as Capt. Montgomery Brown, a tormented soldier who returns home from the Civil War to find his father dead and his town overrun by a Mexican gang leader who has stolen his land and his wife. He’s been reported dead himself so he dyes his hair black and goes undercover as a peasant (ostensibly named Ringo) to infiltrate the gang, rescue his family, and avenge his father. Under the cover of delivery man for the town florist (Manuel Muñiz, credited as Pajarito), he is practically unnoticed as he slips into every occasion, overlooked as simply part of the furniture. The florist offers the sole moments of humor with his great Rube Goldberg inventions, little flourishes that Tessari tosses off with delighted relish.

Where Pistol is a clever little battle of wits with a rogue of a hero taking on an entire gang, Return is more of a tragedy with a haunted protagonist who can’t take any chances with the lives of his wife (Lorella De Luca) and young daughter in the hands of the enemy. Ennio Morricone scores both films but he lays it on so thick here it sounds almost like a parody of his most operatic moments, and Tessario turns the occupied desert outpost into the most desolate southwestern town ever seen in a spaghetti western that was still inhabited. The howl of the winds and blinding dust suggest a Sodom and Gomorrah about to be blown off the face of the Earth. It certainly matches the dispirited mood of the townsfolk. The sheriff has become a drunk, unable to move against the overwhelming numbers, and the white citizens cower in a town where the bar flips the usual bigotry with a sign that announces the power shift: “No gringos.” It makes for a weird kind of racial hysteria: America overrun by invading Mexican criminals. Luckily for Ringo, even with an injured gun hand wrapped in a mitt of a bandage, he can still outshoot the bad guys.

George Martin goes villain for this film, playing the son of gangland boss, and Nieves Navarro is the worldly bar girl who becomes fascinated by the lowly peasant with the iron will and switches allegiances when the showdown begins. It’s a small role but a memorable part and she plays it with a touch of melancholy and heartbreak.

These are the only westerns made by Tessari and they are great fun, not quite iconic but clever and engaging and filled with deft touches and interesting twists. He brings a sense of humor, colorful characters, and offbeat touches to the first film and plays the second as tragic drama with melodramatic dimensions. They became big hits in Europe (though not the U.S., where Leone’s westerns set the tone) and spawned a whole series of in-name-only “Ringo” knock-offs. These are the originals and they are finally available to see stateside in this entertaining diptych.

The double feature presents both films mastered from new 2K restorations from original negatives (though some scenes appear to be reconstructed from multiple sources) and offer both Italian and English language soundtracks with optional English subtitles and optional audio commentary by filmmaker C. Courtney Joyner and spaghetti western expert Henry Parke. There are also interviews with film historian Tony Rayns, who discusses Italian genre cinema of the era and filmmaker Duccio Tessario as well as the story behind the two films (it runs 38 minutes), and with stars Giuliano Gemma and Lorella de Luca (26 mins).

A Pistol for Ringo / The Return of Ringo: Two Films by Duccio Tessari (Special Edition) [Blu-ray]

Sergio Leone’s A Fistful of Dynamite (1971), also known as Duck, You Sucker, stars James Coburn as John, an IRA revolutionary with a penchant for dynamite who had fled Ireland for Mexico, and Rod Steiger as Juan, a Mexican bandit who targets the rich and pompous. In the face of the decadence and hypocrisy of the rich and the holy, the peasant Juan is honest about who he is and he doesn’t kill, which makes him someone that Leone can respect. When Juan crosses paths with John, who is tossing explosives from his motorcycle in the desert, the two men start off as adversaries trading tit-for-tat in a game of one-upmanship and become partners and finally friends.

Juan has no illusions about for the Mexican revolution. He’s simply out for gold with a gang formed by his sons (“Each from a different mother”) and his father (“I think”) and his grail is the bank at Mesa Verdi. John, driven by betrayal that has snuffed his idealism and now only believes in dynamite, or so he says. In fact, he’s committed to the revolution and he drags Juan into his mission. Coburn plays the role as a tormented hero under the mask of a smile. Steiger delivers an exaggerated stereotype of a peasant accent but his physical performance is far more expressive as he transforms from shuffling peasant (a performance for the stage drivers and passengers) to bandito patriarch to bank robber to unlikely hero of the revolution.

Ultimately Leone’s epic of the Mexican revolution is a portrait in disillusion grounded in ambiguity and contradictions and the most eccentric and touching friendships in Leone’s cinema. The film was a financial flop and Leone didn’t direct another film (at least officially) until Once Upon a Time in America over a decade later, but while it is not as well known or regarded as his most famous movies, it is interesting and engaging and, most importantly, heartfelt.

Previously released on Blu-ray and DVD by MGM under the title Duck, You Sucker, this new edition looks like it has been mastered from the same digital source and carries over all of the supplements of the earlier edition. There are two commentary tracks, one by filmmaker Alex Cox and the other by spaghetti western historian Sir Christopher Frayling, the featurettes “The Myth of the Revolution,” “Sergio Donati Remembers,” “Once Upon a Time in Italy (The Autry Exhibit),” “Sorting Out the Versions,” “Restoration Italian Style” (on the different versions of the film), and “Location Comparisons,” plus galleries, radio spots, and trailers. New to this release is the “Trailers from Hell” spot with Brian Trenchard-Smith.

A Fistful of Dynamite [Blu-ray]

A Fistful of Dynamite [DVD]

Discs provided by Arrow and Kino Lorber for review purposes.