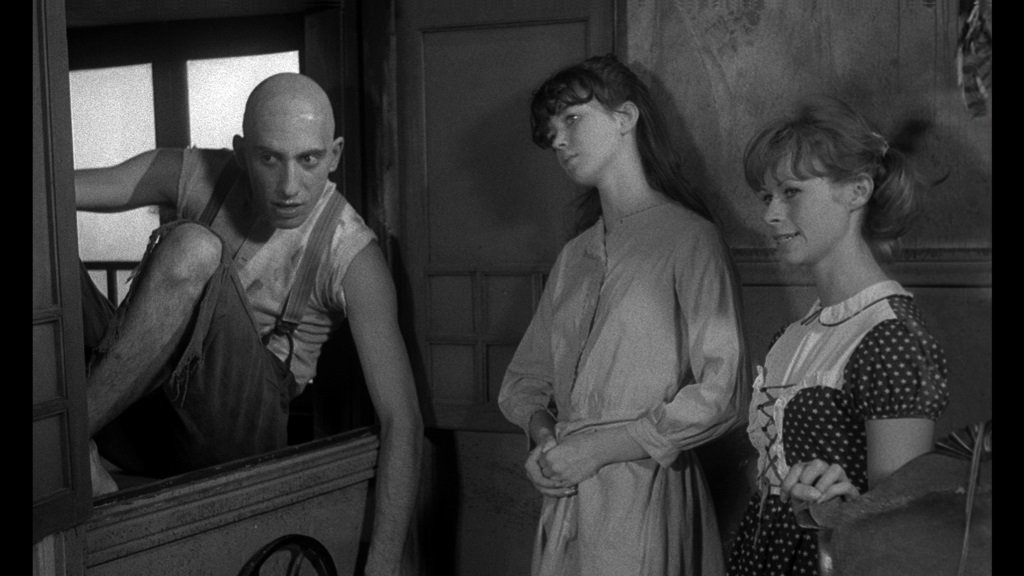 Spider Baby (1967) is one of the greatest blasts of creative B-movie inspiration to hit American drive-ins and grindhouses. It was the solo directorial debut of Jack Hill, a low-budget film that was financed by real estate developers who wanted to get into the movie business and got stuck in limbo for years when the producers went bankrupt. Shot in 1964, it was finally released in 1967, by which time black-and-white films were no longer considered for first-run bookings. It was sold as a second feature and then fell into the public domain, where it became a cult movie a generation later, thanks to cheap videotape copies. Hill never made a dime on it, but he did belatedly get some attention for it. For all of its technical shortcomings and budget-related compromises, I still think it’s his most inspired film.

The final descendants of the Merrye family live in an isolated manor, hiding their curse from society in an old family home that could have been built as a vacation home by the architect of the Bates hilltop home. They suffer from Merrye’s Syndrome, a (fictional) malady causes all members of the family to regress mentally and emotionally with the onset of puberty. “The unfortunate result of… inbreeding,” explains Bruno (Lon Chaney Jr. in a warm, paternal performance), the chauffeur and guardian of the afflicted children of his old master. Elizabeth (Beverly Washburn in adolescent pigtails) and Virginia (Jill Banner), the spider baby of the title, are typical sisters playing (and tattling on one another) in schoolgirl frocks. Gangly Sid Haig as the bald, infantile Ralph, an older brother slipping into back into a pre-verbal state. Things are fine as long as no one comes around (pity the poor postman) but when distant cousins Peter and Emily Howe (Quinn Redeker and Carol Ohmart) arrive with a lawyer (Karl Schanzer) to contest the will, things get interesting.

It’s kinky and cruel and oddly sweet all at the same time, and it sneaks by thanks to the performances (not necessarily sophisticated but all committed to the characters and perfectly pitched to the tone of the film), grindhouse elements and the offbeat humor and black comedy woven through the piece. Hill peppers the script with Wolf Man references, from a conversation between Peter and Anne (the lawyer’s secretary) discussing horror movies to Lon Chaney’s Bruno ominously observing “There’s going to be a full moon tonight.”

Washburn and Banner are a terrific sister act, one moment sniping at each other, the next conspiring, and they reveal a childlike innocence to their actions: murder as a form of play and curiosity, without any real understanding of the consequences. Sid Haig is absolutely perfect as Ralph, sweet and curious, a well-meaning giant infant in an adult body. He dresses for dinner in a Little Lord Fauntleroy outfit that looks like it shrunk down three sizes since he donned it. Quinn Redecker plays Uncle Peter like he’s the B-movie Robert Cummings role and he does a great job of it. He’s affable, likeable, kind, and instinctively affectionate toward the children. “Aw, he’s just a big kid!” he exclaims when Ralphie crawls over to check him out, like a puppy unsure of this odd new smell.

Hill clearly draws from Psycho, but with an innocence to the psychos of the story, with the lighthearted attitude of a William Castle film, but Hill’s strange brew end up being more Lord of the Flies by way of Freaks and Freud, with a provocative commentary on adolescence and the primal drives of the human animal through the lens of a genre movie. Think about it: as these adults regress to children, they revert to primitive stages: deadly games, cannibalism, death and murder as acceptable forms of protest, and adolescent sexuality. I really don’t understand what Carole Ohmart is doing in skimpy lingerie parading in front of the mirror (and for the camera). It’s adult content for what is more properly a drive-in movie, a mix of horror and parody and surreal weirdness, a weird detour that displays her kinky side, but it also rouses feeling in Ralphie, who spies on her through the window and carries her off like an infantile Frankenstein’s monster driven on curiosity and inexplicable instincts. Put this next to Virginia’s teasing little game of spider with Uncle Peter and you’ve got something both inspired and unsettling. While he’s tied to a chair, she climbs into his lap and says how much likes him, suggesting a nascent (or lingering) sexual desire behind the mental and emotional regression, either leftover from their “older” selves or a rather Freudian portrait of childhood sexuality complicated by the collision of a child’s emotional state with an adult body.

This is far more daring than Peter Brook’s famous take, and it was all but ignored by critics, largely due to its exploitation origins. Because of the film’s long delay from completion to release, it was dumped onto the second half of double bills. Decades later it was revived and reevaluated, thanks to public domain video copies and TV showings, and it’s been on home video in numerous editions, most of them poor. Amazon Prime presents a fine edition courtesy of Shudder, presented in its proper aspect ratio.

Arrow presents its Blu-ray debut in a superb “Director Approved” Blu-ray+DVD Combo set, with a lovingly restored image (few public domain movies have received the kind of love that this film has gotten in the last decade or so). It features commentary by Jack Hill and actor Sid Haig, recorded for the 2007 Dark Sky DVD release, and three featurettes originally produced for that disc: “The Hatching of Spider Baby,” an excellent comprehensive retrospective featuring interviews with (among others) director Jack Hill, DP Alfred Taylor ASC, and actors Quinn Redeker, Sid Haig, Beverly Washburne, Mary Mitchell, and Karl Schanzer, plus the ten-minute “Spider Stravinsky” (an appreciation of composer Ronald Stein) and seven-minute “The Merrye House Revisited,” with Hill back on location with director Elijah Drenner more than 40 years later.

New to this edition is the “Cast and Crew Panel Discussion” with director Jack Hill and actors Quinn Redeker and Beverly Washburn from a screening at the 2012 Film-to-Film Festival at Academy of Motion Pictures Arts and Sciences. There’s also an extended scenes and alternative opening title sequence (which have been included other earlier disc releases) and Jack Hill’s 1960 student film “The Host,” which is also the film debut of Sid Haig.