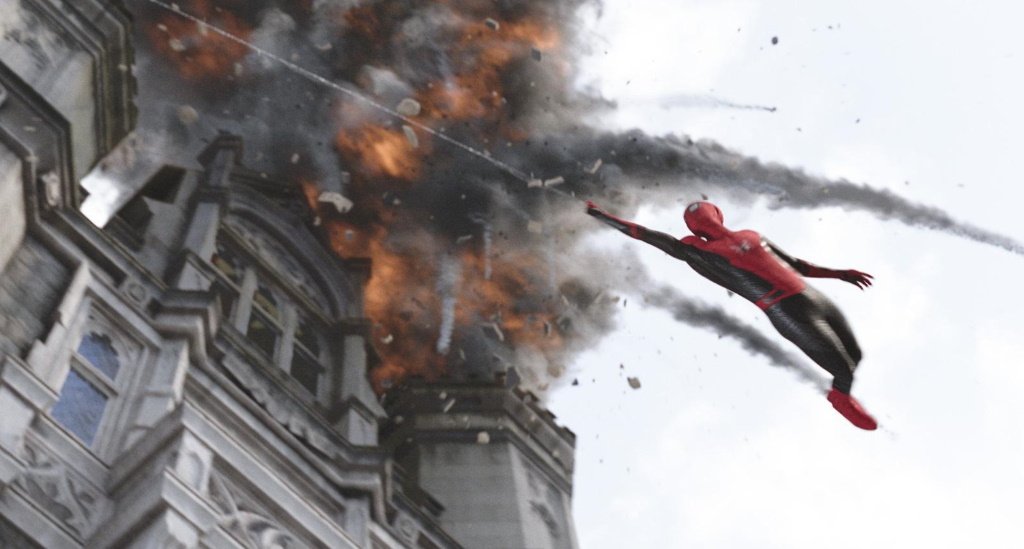 “Spider-Man: Far from Home” (2019, PG) sends the web-slinging teenage superhero (played by Tom Holland) to Europe, where he takes on a new supervillain with a little help from his friends. The first Marvel movie to take place after the epic “Avengers: Endgame” is a spirited, good-natured adventure with plenty of humor. Samuel L. Jackson returns as Nick Fury and Zendaya, Marisa Tomei, Jon Favreau, and Jake Gyllenhaal costar. It makes its streaming debut on all Starz platforms.

Oscar nominee Florence Pugh plays a young woman in working class English wrestling family who gets a shot at the WWE in “Fighting with My Family” (2019, PG-13), a scrappy comedy based on a true story. Dwayne Johnson is a producer and costars as himself. On Amazon Prime Video and Hulu.

“Miss Americana” (2020, not rated), a documentary from acclaimed director Lana Wilson, takes us behind the scenes of the life and career of Taylor Swift as she changes the direction of her public image. It debuts on Netflix.

Two more Oscar nominated features arrive on Cable On Demand and VOD this week. Park Chan-wook’s “Parasite” (South Korea, 2019, R, with subtitles), a savage satire of class in modern Seoul, was a hit in theaters and nominated for six Academy Awards, including best picture. Cynthia Erivo earned nominations for best actress and original song for “Harriet” (2019, PG-13), based on the life of Harriet Tubman. Both on DVD, the latter also at Redbox.

Edward Norton directs and stars as a detective with Tourette’s in “Motherless Brooklyn” (2019, R), adapted by Norton from the award-winning novel by Jonatan Lethem and set in the corruption of 1950s New York City. Gugu Mbatha-Raw, Alec Baldwin, Bobby Cannavale, and Willem Dafoe costar. Also on DVD and at Redbox. Also new:

The secret lives of suburban families are laid bare in “The Stranger,” a British mystery miniseries based on the novel by Harlan Coben. Richard Armitage, Dervla Kirwan, Stephen Rea, and Hannah John-Kamen star. Eight episodes.

A widower fights for custody of his won in “Menashe” (2017, PG, with subtitles), an American indie drama set in the ultra-orthodox Hassidic community

“Bojack Horseman: Season 6 (Part B)” brings the animated comedy to an end, making it one of the longest-running original shows on Netflix.

International affairs: A young woman with cerebral palsy pursues her dream to become a manga artist in “37 Seconds” (Japan, 2019, not rated, with subtitles) and Matthias Schoenaerts and Reda Kateb star in the crime thriller “Close Enemies” (France, 2018, with subtitles). Also new:

International TV: a teenage girl in 17th century Italy discovers she comes from a family of witches in “Luna Nera: Season 1” (Italy, with subtitles). Also new:

The nonfiction docuseries “Ted Bundy: Falling For a Killer” offers new perspectives on the infamous serial killer through interviews with Bundy’s girlfriend Elizabeth Kendall, her daughter Molly, and other survivors speaking publically for the first time.

A Palestinian writer on a nighttime soap opera gets tips from an Israeli border official in the comedy “Tel Aviv on Fire” (Israel, 2018, not rated, with subtitles), a social satire that uses humor to look at the tensions in modern Israel. It won the best film award at SIFF last year.

Mario Bava’s stylish horror classic “Blood and Black Lace” (Italy, 1964) is one of the most influential films of the genre. It’s now on Amazon Prime, along with Italian horrors “Hitch Hike” (Italy, 1977, not rated) with Franco Nero and Corinne Clery, and Ricard Freda’s “Murder Obsession” (Italy, 1981, not rated).

Aldis Hodge is “Brian Banks” (2019, PG-13) in the drama based on the true story of the star football player trying to clear his name after serving time for a crime he didn’t commit.

Protective parents clash with a high school teacher over their adopted son, a star student, in “Luce” (2019, R), a drama about race, perception, and privilege starring Naomi Watts, Octavia Spencer, and Tim Roth.

Streaming TV: “The Terror: Infamy” (2019), the second season of the AMC anthology horror series, is a ghost story thriller in a community of Japanese Americans imprisoned in an internment camp during World War II.

Criterion Channel presents the streaming debut of the director’s cut of Wim Wender’s globetrotting science fiction epic “Until the End of the World” (1991, R), along with a selection of supplementary materials from the special edition disc release. You can see new and archival interviews with filmmaker Wim Wenders, a conversation between Wenders and musician David Byrne, deleted scenes, featurettes and more.

Britbox has the tenth season of “Vera,” the long-running British mystery series starring Brenda Blethyn, and the complete run of the comedy series “Mrs. Brown’s Boys” with Brendan O’Carroll.