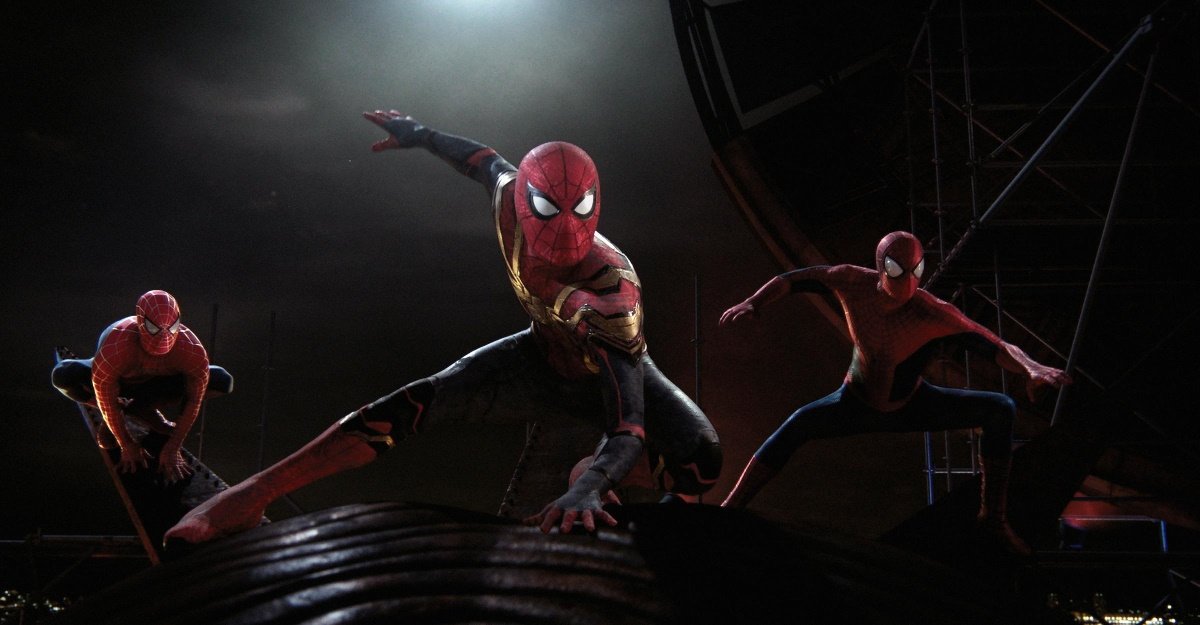 Tom Holland returns in what may be his final appearance as the super-powered Peter Parker in “Spider-Man: No Way Home” (2021, PG-13), a lively, spirited superhero adventure that brings two previous big screen incarnations of the webslinger (Tobey Maguire and Andrew Garfield) to help our newly-unmasked hero deal with villains from all over the multiverse. Director Jon Watts brings heart and warmth to the lively odyssey, and the callbacks to the previous “Spider-Man” movies are clever and sometimes quite touching. Benedict Cumberbatch appears as Doctor Strange (who continued his adventures in the multiverse in “Multiverse of Madness”) and Zendaya, Jacob Batalon, Jon Favreau, and Marisa Tomei costar. (Starz)

“The Bob’s Burgers Movie” (2022, PG-13), the feature-length spin-off of the hit animated comedy, finds the Belcher family struggling to keep their restaurant running when a sinkhole appears in front of their entrance, while the kids get involved in a murder mystery involving their landlord (voiced by Kevin Kline). The musical comedy-mystery-adventure hits streaming just six weeks after debuting in theaters. (Hulu and HBO Max)

Dakota Johnson stars as the unmarried Anne Elliot and Cosmo Jarvis is the man whose proposal she turned down eight years before in “Persuasion” (2022, PG). This new adaptation of the classic romantic drama tosses modern sensibilities and diverse casting into the Regency setting of the Jane Austen novel, and drives it with rapid pacing and sometimes awkward humor. Mia McKenna-Bruce, Henry Golding, Nikki Amuka-Bird, and Richard E. Grant costar. (Netflix)

“Uncharted” (2022, PG-13) stars Mark Wahlberg as a veteran treasure hunter who recruits a street-smart thief (Tom Holland) to help him find a fortune in gold lost 500 years ago. Antonio Banderas costars in this globetrotting adventure as a ruthless rival and Ruben Fleischer directs. (Netflix)

“Resident Evil: Season 1” (TV-MA), the first live-action series based on the video game franchise about an outbreak that turns is victims into infected zombies, was developed for Netflix by “Supernatural” producer/showrunner Andrew Dabb and stars Lance Reddick and Ella Balinska. (Netflix)

“How to Change Your Mind” (TV-MA) looks as how modern science exploring the potential of mind-altering substances (LSD, psilocybin, MDMA, and mescaline) to help heal the brain. Author Michael Pollan teams up with Oscar-winning filmmaker Alex Gibney for this four-part docuseries.

Chris Hemsworth and Michael Shannon star in the military thriller “12 Strong“ (2018, R), set in Afghanistan after the September 11 attacks.

International passport: “Image of Victory“ (Israel, 2021, TV-14, with subtitles) dramatizes an attack on a kibbutz on the Gaza Strip early in the Arab-Israeli conflict in 1948. Avi Nashar directs. Also new:

International TV: a young woman (Elena Rivera) awakens with no memory of being assaulted by her boyfriend’s buddies in “Alba: Season 1“ (Spain, TV-MA, with subtitles). Also new:

Return to Staten Island for the fourth season of the vampire comedy “What We Do in the Shadows“ (TV-MA). New episodes on Wednesdays.

The limited series documentary “Victoria’s Secret: Angels and Demons“ (TV-MA) looks at the provocative story of the rise and fall of the famous lingerie brand and the CEO’s relationship with Jeffrey Epstein.

Two drifters (Zac Efron, Anthony Hayes) become wary partners in when they stumble across a fortune in “Gold“ (2022, R).

True stories: the limited series “The Anarchists“ (TV-MA) looks at the strange story of an idealistic anarchist community in Acapulco, Mexico and its spiral into chaos and violence. New episodes on Sundays.

International TV: a rookie cop and an eccentric group of friends get caught a war between rival alien factions in the sci-fi comedy “The Visitors: Season 1“ (France, TV-MA, with subtitles).

John Cho stars as a single father diagnosed with a terminal disease and Mia Isaac is his teenage daughter in the road movie dramedy “Don’t Make Me Go“ (2022, R), which takes them from California to New Orleans and perhaps to the mother who left them long ago.

The reality series “Forever Summer: Hamptons“ (2022, TV-MA) follows a group of college kids working at a seaside restaurant over the course of a summer.

New episodes of the soap opera spinoff “Days of Our Lives: Beyond Salem: Season 2“ (TV-14) arrive on Mondays.

Will Ferrell and Drew Barrymore provide the voices in “Curious George“ (2006, G), the animated feature based on the popular children’s books.

The first responder nurses and pilots of “SkyMed: Season 1“ (TV-14) fly to remote calls in the wilderness of Northern Canada.

The documentary “The Only“ (2022, TV-MA) chronicles the life and career of soccer star Briana Scurry.

Andrea Arnold directs the documentary “Cow“ (2022, not rated), an intimate portrait of one dairy cow’s life.

A single mother moves in with her own estranged mother in Cape Town in “Good Madam“ (South Africa, 2022, not rated, with subtitles), a horror film wound around race and family. (AMC+ and Shudder)

“Three Families“ (2021) dramatizes the true story of three women and their families in Northern Ireland between 2013 and 2019, when abortion rights were finally passed. (Sundance Now)

An Israeli filmmaker struggles against censorship while he presents a film in a small village in “Ahed’s Knee“ (Israel, 2021, not rated, with subtitles), winner of the Jury Prize at the 2021 Cannes Film Festival. (Criterion Channel)

“In the Ring: Boxing On-Screen” brings together 16 features and documentaries, from

Alfred Hitchcock’s romantic drama “The Ring“ (1927, silent with score) to the documentary “When We Were Kings“ (1996). Among the highlights are “The Set-Up“ (1949) with Robert Ryan as an aging boxer, “The Harder They Fall“ (1955) with Humphrey Bogart as a sports writer, John Huston’s “Fat City“ (19712) with Jeff Bridges and Stacy Keach, and Martin Scorsese’s “Raging Bull“ (1980, R), which is presented with a wealth of supplements from the Criterion Collection disc release.

Richard Roundtree is “Shaft“ (1971) in the original hit crime drama, featuring documentaries and interviews from the Criterion disc release. Can you dig it?

Jean Renoir’s “Swamp Water“ (1941) and Jean Negulesco’s “Lure of the Wilderness“ (1952) make for a double feature of stories set in the backwaters of the rural American South.

Rivals scramble for a priceless scroll in a remote monastery in “Raining in the Mountain“ (Taiwan, 1979, not rated, with subtitles), a playful martial arts adventure from the great King Hu.