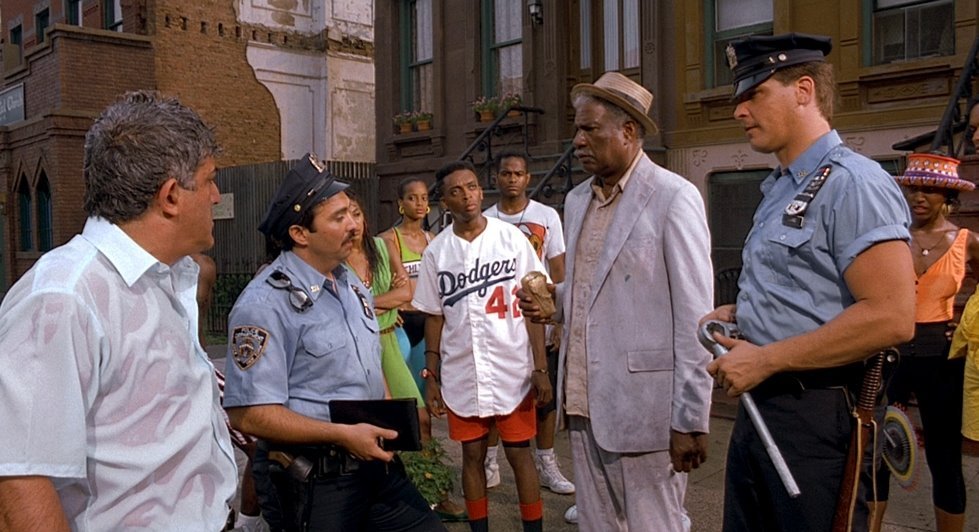 Do The Right Thing (1989), Spike Lee’s vibrant, vital, thoroughly accomplished third feature, opens on a call to action – “Fight the Power,” shouts Public Enemy in the credits – and ends with a call to “Wake up!”

Rosie Perez pumps out an aggressive shout of a dance in the opening credits, staged in front of a tenement set bathed in fiery red light. It’s not merely an evocation of the heatwave (literal and figurative) on this scorcher of a summer day in New York’s Bed-Stuy neighborhood, it anticipates the incendiary drama to come: confrontation will end in conflagration.

As a private citizen, Spike Lee is aggressively outspoken and provocative. As a filmmaker, he is remarkably inclusive and egalitarian. Do The Right Thing gives every character in the bustling ensemble a voice, a sensibility, and a dignity, from the ranting would-be activist Buggin Out (Giancarlo Esposito) to the philosophical neighborhood drunk Da Mayor (Ossie Davis) to the pizzeria proprietor Sal (Danny Aiello) who displays his American-Italian pride on his ethnic-exclusive Wall of Fame.

Danny Aiello tussled with writer/director Lee over the portrait of Sal. To Spike, Sal was (for all his generosity) a racist, while Aiello saw him as just a guy getting by in a neighborhood where he had become a minority. That tension is all over the movie. No one thinks they’re racist (not even Sal’s angry bigot of a son, played by John Turturro), yet the racial divide defines the social currency of the film, whether it’s the increasingly heated war of words and wills between Sal and Buggin Out, the escalation of the violence when the cops respond to a brewing riot, or the unveiled contempt with which everyone treats the Korean shop owners.

Race is surely the hardest issue to tackle with any honesty and insight in American cinema (just look to the Oscar-winning film Crash to see it reduced to a battle of stereotypes). Lee doesn’t attempt to answer the complicated questions of racism, misunderstanding, and simmering anger as much as confront them with a hard clarity. The blast of violence that ends Do the Right Thing accomplishes nothing, but it expresses a deep well of disenchantment and unfocused rage that, for a few moments, finds an outlet and a focus. It’s a ferocious, uninhibited scream in the face of injustice.

It was nominated for Academy Awards for Danny Aiello’s performance and Spike Lee’s original screenplay and was added to the National Film Registry in 1999.

Also on DVD and Blu-ray in special editions and on SVOD through Amazon Video, iTunes, GooglePlay, Vudu,

and other services. Availability may vary by service.
Do the Right Thing (The Criterion Collection) [DVD]

Do the Right Thing [DVD]

The Criterion DVD features St. Clair Bourne’s sharp documentary “Making Do The Right Thing” explores the rich atmosphere of the film’s creation while always centering back in the neighborhood where it was set and shot. Lee and Danny Aeillo dueling over interpretations of Italian pizza place owner Sal is a microcosm of Lee’s strengths: however the director interprets the drama, every character gets his voice. Criterion’s deluxe two-disc set also features commentary by director Spike Lee, cinematographer Ernest Dickerson, production designer Wynn Thomas and actress Joie Lee, revealing video footage of script readings, rehearsals, and pre-production character work, and an interview with editor Barry Brown (and Lee’s old boss at First Run Features) among the wealth of supplements.

The Blu-ray from Universal Studios Home Entertainment features the new documentary “Do the Right Thing: 20 Years Later,” with new interviews with the cast and crew (conducted by Spike himself) and footage of Spike and his collaborators at a recent audience Q&A and a new commentary track by Spike. Carried over from the Criterion DVD is the 2001 commentary track, St. Clair Bourne’s 1989 documentary “Making Do The Right Thing,” deleted/alternate scenes, and other interviews and archival goodies. Also includes an Ultraviolet Digital HD copy of the film.