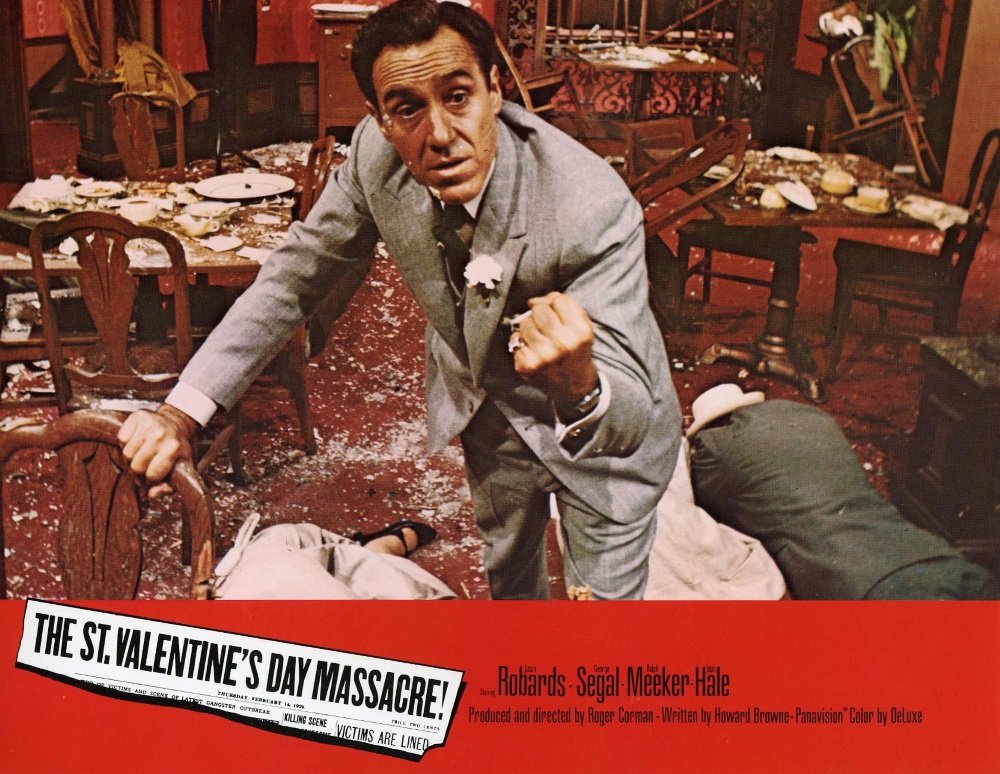 The St. Valentine’s Day Massacre (1967) gave Roger Corman, the director-producer who earned the nickname “King of the Bs,” the biggest budget of his career to date. After more than 40 films, most of them for the budget-challenged AIP, he was hired by 20th Century Fox and given the resources of their studio, casting department, and backlot for his recreation of 1929 Chicago and the most famous gangland slaying in American history.

Jason Robards is somewhat miscast as the stocky Al Capone—he was originally cast as rival mob boss “Bugs” Moran but Corman’s first choice for Capone, Orson Welles, was nixed by the studio as being “too difficult” and Robards simply promoted to the leading role—but he certainly captures the savagery, the emotional explosiveness, and the media-savvy persona that Capone puts on when talking to reporters. His tit-for-tat battles with Northside gangster Moran (Ralph Meeker) turn into a full-scale war when Chicago’s Mafia Don (and Capone’s boss) is knocked off in a power play. Corman directs from a script by Howard Browne, who was a reporter in Chicago when the real event occurred, that takes in the big picture and charts the stories and trajectories of over a dozen characters tangled in the plot to kill Moran. George Segal gets the biggest role as Peter Gusenberg, a ruthless Moran gunman in a tempestuous affair with a showgirl (Jean Hale), and Clint Ritchie is Capone’s favored lieutenant Jack McGurn, a young, ambitious guy with matinee idol looks and an initiative that earns him the job of planning and executing the Moran hit. The whole thing is structured with documentary-like narration by Paul Frees (which also echoes the TV series The Untouchables) that identifies the players and keeps the timeline of the complicated plan straight.

Corman gets a good cast of venerable characters, among them Frank Silvera, Joseph Campanella, Richard Bakalyan, Harold J. Stone, Joe Turkel, John Agar, Reed Hadley, Alex Rocco, and Leo Gordon, and adds in a few of his favorites, including Bruce Dern in a sympathetic role as an earnest mechanic just trying to support his family and unbilled appearances by Dick Miller and Jack Nicholson. Corman is adept at creating human moments between the plot points, reminding us of the little guys caught up in the war and the human cost of the violence, while the narration provides the death dates of each character in their respective introductions. Nobody gets out of this life alive. Some just survive it a little longer.