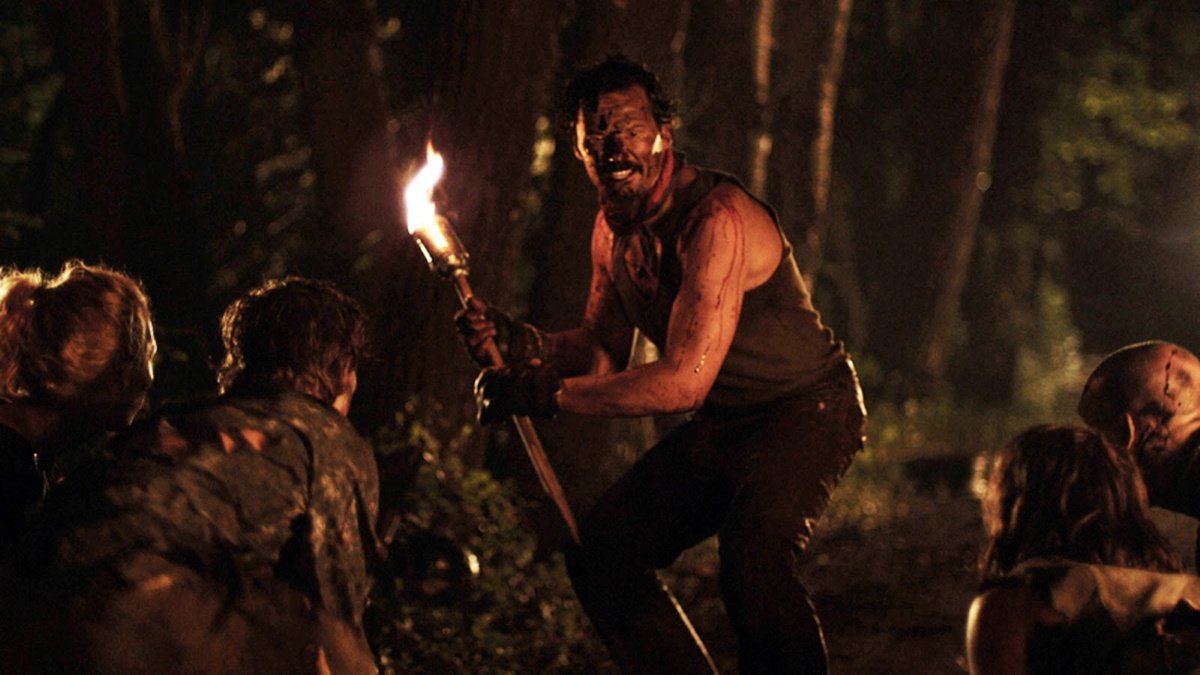 The similarity in the title of the indie vampire drama Stake Land (2010) and the 2009 comic zombie road movie horror Zombieland is coincidental but fitting, as much for the differences in the films as for the similarities.

There’s a plague turning humans into undead creatures out for blood, an orphaned boy (Connor Paolo as Martin) learning to survive, a father figure (Nick Damici) with an unspoken past (he’s simply known as Mister to one and all) and rumors of a safe place far away. And the vamps here are a lot more like zombies (by way of feral carnivores) than the social creatures we associate with vampire cabals.

But the similarities end there. This is no gallows comedy, it’s a survival drama that has more in common with The Road or George Romero’s late Dead films, but without the soul-crushing bleakness of the former or the horror as spectacle of the latter. The cabal here is a fringe Christian sect turned authoritarian cult that thinks the bloodsuckers were sent by God to cleanse humanity and they figure anyone who doesn’t tow their line needs a fatal cleansing. Quite frankly, they are scarier than the vamps.

The symbolism isn’t all that subtle and the backwoods fanatics tend toward hysterical stereotype—neo-Nazi nightmare by way of survivalist nutcase—but director Jim Mickle and co-screenwriter Nick Damici keep the film focused on the people and the relationships. There’s a scruffy immediacy to the direction—low budget production, practical locations and shooting on the fly—but also a grace to the imagery and a commitment to the performances. They don’t break loose and confess all, but the sense of comfort they find in one another warms the film.

Stake Land is as much about keeping hope and humanity alive as it is about staying physically alive. It’s suffused with sadness and loss, not talked about but felt, but also the necessity of emotional connection. No one says anything about “family,” but apart from the cult, the human survivors shown here have an instinct to protect anyone who has made it this far. Mister may put on a façade of emotional disconnection, but it’s clear from his actions that he commits himself to anyone who becomes part of his band. In an era of glib horror film cynicism, it’s is refreshing portrait of human connectedness and the most accomplished horror film of 2011 to date.

Add to My List on Peacock or find it on AMC+ or watch free on Kanopy, which is available through most public and college library systems.

The two-disc DVD and single-disc Blu-ray features the commentary tracks and more supplements. The hour-long “Going For the Throat: The Making of Stake Land” is not a traditional documentary but a more free-form collection of behind-the-scene footage without narration or interviews to frame or shape the production. We just see the process unfold. Four short “Production Video Diaries” from Jim Mickle are more focused on the specific areas of pre-production, storyboards, visual effects and post-production, and you can also find the 24-minute “Q&A at Toronto International Film Festival Premiere” (with the director, producer and cast) in the “Video Diaries” section.

There are also seven short “Character Prequels” (directed by Larry Fessenden, Danielle Harris, Glenn McQuaid, JT Petty and Graham Reznick) that are more like mood pieces than narrative shorts. There’s some lovely moments in the pieces but they don’t add anything to the film (the absence of backstory is part of the film’s texture) and really more like promotional teasers than independent short films.