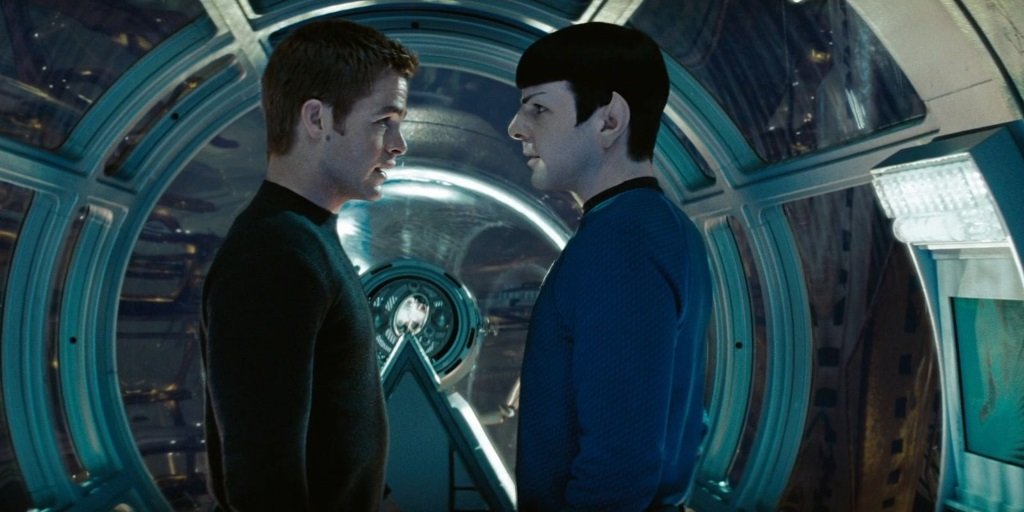 Talk about boldly going: Star Trek (2009)—no numbers, no subtitles, no tags—is not simply a prequel to the franchise. It’s an entire relaunch and director J.J. Abrams dares to rewrite Trek lore with an origin story that chronicles the first voyage of the Enterprise crew with a mission that sends them into a whole new chapter of Federation history. Time travel is involved (it’s Star Trek; when is time travel not involved?) as is apocalyptic revenge and the fate of the universe (ditto), but Abrams knows what he’s doing.

The opening is bright and colorful and lacks nothing for ambition or scale: a ship that looks like a cross between a steel thistle and predator insect comes out of a space storm and immediately changes the storyline in the birth of James T. Kirk. Yes, the fabric of reality has been changed and Kirk (bleach blond Chris Pine) grows up fast and arrogant, a townie with blue eyes twinkling and a chip on his shoulder who likes to scrap with the Starfleet cadets waiting at the Iowa shipyards for transfer to the Academy. And then he becomes one himself.

Call it “When Kirk Met Spock.” There are first meetings all around and these younger models offer a new take on all the old classics. Zachary Quinto channels Leonard Nimoy’s deadpan commentary and raised eyebrow as Spock, Karl Urban drawls McCoy’s country doctor homilies and frontier exclamations, boyish Anton Yelchin delivers Chekov’s goofy energy and inability to pronounce the letter “v,” superfan Simon Pegg embraces Scotty’s unalloyed joy at mucking with equipment and pushing the warp engines to their limit, and Pine delivers Kirk’s bachelor-officer getting into fights and trying to pick up every young female his eyes brush past. Starting practically from scratch, Zoe Saldana gives Uhura a lot more ambition and agency than the sixties model Abrams and writers Roberto Orci and Alex Kurtzman (both vets of Abrams’ Alias and Fringe) provide an unexpected love interest.

They don’t all get along but must learn to work as a team when they are called to duty in an emergency mission and (due to injury, attrition and the convenient plotting of the screenwriters) land in the very chairs they will inhabit in the series we all know and love.

Abrams has improved significantly as a big-screen director since the third Mission: Impossible film. He keeps a light touch through the adventure, never taking the mythology too seriously (lots of in-jokes) but just seriously enough. Fans of the old get to see Captain Pike (Bruce Greenwood here), the famed “Kobayashi Maru” win, and the inevitable fate of the first red shirt (chronologically speaking, of course) who joins Kirk for a mission.

It’s tricky straddling devotion to as institution with such a passionate following and creating a new incarnation for the next generation and Abrams doesn’t get it all right. Sure, they take a page out of Trek movie to date and provide a mad villain on a mission of vengeance (a la Khan Star Trek II: The Wrath of Khan“) driven beyond logic or reason, but do we need another villain coming through time to alter the past and remake his future? At least Abrams is an old hand at that through Lost and Paramount seems quite happy to give his team a chance to rewrite history, with a knowing wink to the fans of old and a promise of unlimited possibility to the new fans they hope to attract.

Paramount presents a special edition of the film on Blu-ray and DVD. Director J.J. Abrams is joined by writers Robert Orci and Alex Kurtzman, producer Damon Lindelof and executive producer Bryan Burk (joining via satellite from NY) for a lively and busy commentary track that manages to cover a lot of territory while having fun; these guys seem to enjoy one another’s company. Both the two-disc DVD and three-disc Blu-ray editions include three hours of featurettes (watch Abrams resort to old school solutions to practical effects in “A New Vision”), nine deleted scenes (including the birth of Spock and another scene with Kirk and a green girl), the obligatory gag reel and a digital copy of the film for portable media players. The Blu-ray features extended versions of the featurettes via “branching pods.”